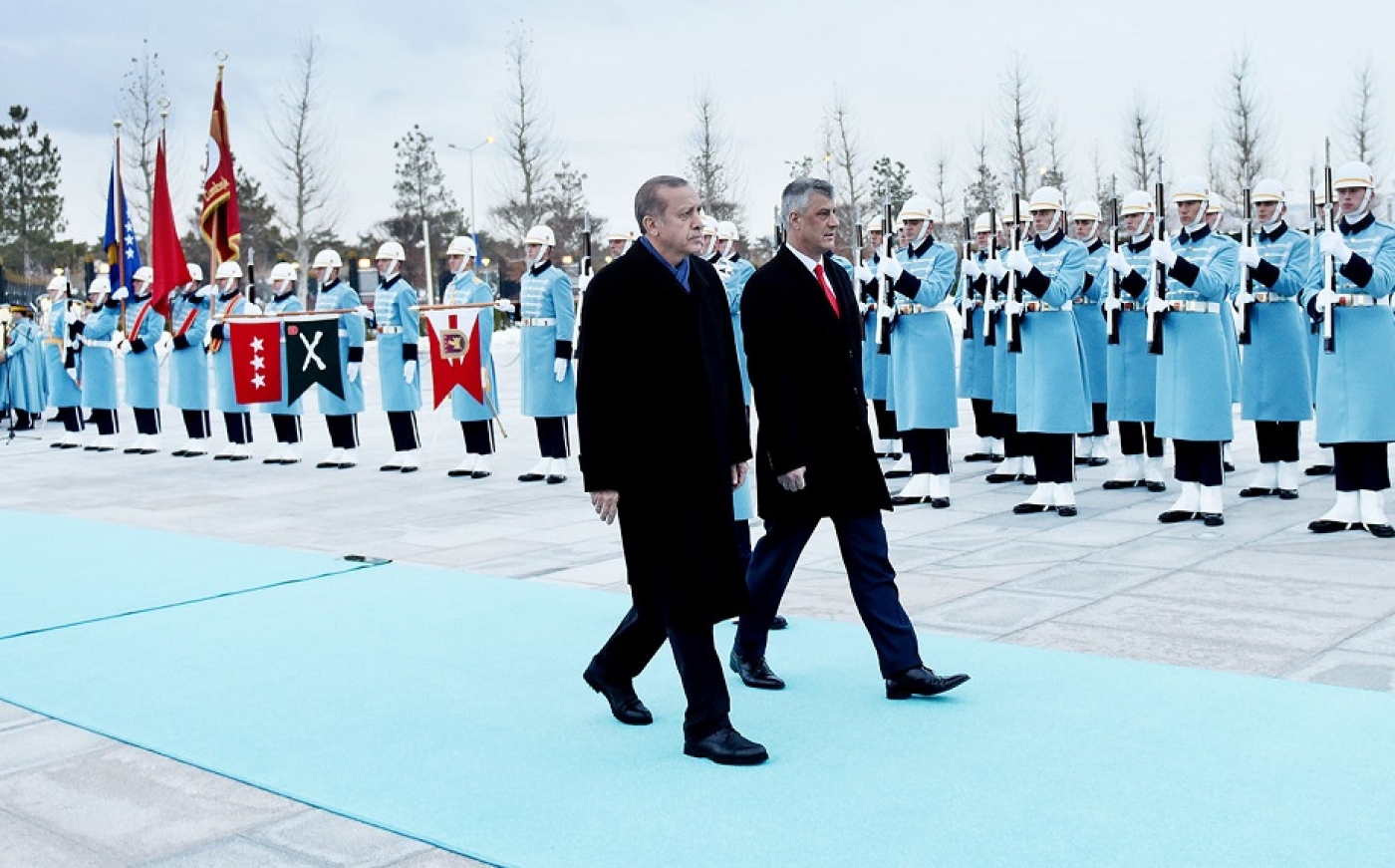 President of the Republic of Kosovo, Hashim Thaci, meets with Turkey's President Recep Tayyip Erdogan, during his official visit to Ankara (President-ksgov.net)
By
MEE and agencies

Kosovo's prime minister has sacked his top security chiefs and ordered a probe into the expulsion of six members of US-based Muslim cleric Fethullah Gulen's movement, which is blamed by Turkey for a 2016 coup attempt.

Five teachers at a Gulen school and a doctor were spirited back to Turkey on Thursday in a covert operation carried out by Kosovo's interior ministry and spy service together with Turkey's National Intelligence Organisation (MIT).

Haradinaj told reporters after an emergency meeting of his national security council on Saturday that he has dismissed interior minister Flamur Sefaj and intelligence chief Driton Gashi over their involvement in the operation.

Based on my Constitutional competencies, I have asked the immediate dismissal of all duties & responsibilities the Minister of Internal Affairs #Sefaj & the Director of Intelligence Agency #Gashi. 1/2

The operation of urgent and secret detention and deportation of 6 #Turkish citizens from the territory of the Republic of #Kosovo to the Republic of #Turkey was conducted without informing, nor requesting my permission as Prime Minister. 2/2

"They were obliged to inform me [about the expulsion]. They did not. They did not have enough trust to share the case with me, so I no longer trust them. They have lost my confidence," he said.

Gulen, a one-time ally turned foe of Turkish President Recep Tayyip Erdogan who now lives in self-imposed exile in Pennsylvania, is accused by Ankara of being behind the failed military coup attempt in July 2016.

Erdogan said on Saturday the six men had been captured by Turkish intelligence officers and brought to Turkey.

"Our national intelligence agency captured six of the highest ranking members of [Gulen's network] in the Balkans in the operation it conducted in Kosovo," said Erdogan, speaking to supporters and party members in Istanbul.

He added that he was saddened by the sacking of the Kosovo interior minister and secret service chief.

Human Rights Watch criticised the Kosovo authorities over the arrests.

"In addition to the questionable arrests, the men were sent to a country where they face a serious risk of torture," the watchdog said in a statement.

The Istanbul prosecutor is investigating the men who, according to Anadolu, were organising the movement of Gulenists from Turkey to European countries and the United States.

One of the six, Kahraman Demirez, is accused of helping to increase involvement in the movement in the Balkans, while Cihan Ozkan is suspected of sending money collected from Balkan countries to leaders of the Gulen movement in Pennsylvania, Anadolu said.

Kosovo has been under pressure from Turkey in recent weeks to take action against schools funded by the Gulen organisation.

Relatives of the six had stayed at Pristina airport until early on Saturday after rumours spread that they might still be in Kosovo.

They left after the police said the six had been sent to Turkey on Thursday.

"My father was kidnapped," said one relative, Mustafa Gunakan, outside the airport. "We thought we were safe in Kosovo. We never thought it would end this way."