Hundreds of thousands of flag-waving Turks massed on Sunday for the first cross-party rally to condemn the coup attempt against President Recep Tayyip Erdogan.

Istanbul's Taksim Square was transformed into a sea of red national flags in what was dubbed a "democracy festival".

Despite high tensions since the coup attempt, the mood in Istanbul was celebratory and strongly patriotic, with security tight following a series of recent attacks by the Islamic State (IS) group and Kurdish militants.

"We defend the republic and democracy," read one sign in the vast and jubilant crowd, while others declared "Sovereignty belongs to the people alone" and "No to the coup, yes to democracy!"

A much-needed moment of unity for #Turkey: Tens of thousands in Taksim against coup, opposition & govt together pic.twitter.com/dBvddCYy8j

The mass event was called by the biggest opposition group, the secular and centre-left Republican People's Party (CHP), many of whose members carried pictures of modern Turkey's founding father Mustafa Kemal Ataturk.

To signal patriotic unity and make the rally a cross-party event, it was joined by Erdogan's Islamic-conservative AKP, whose followers have rallied in support of the president every night since the failed putsch.

The crowd chanted: “Turkey is secular and will remain secular!”

Kilicdaroglu said: “We love our country, we love our people, we want to live together like brothers. We will defend the freedom of the press all together.”

He added: “Media is the fourth pillar of democracy. I call on those speaking on behalf of, and claiming to, defend democracy to enshrine this in the constitution.”

1: The 15 July coup attempt was against our parliamentary democracy.

2: All political parties opposed the coup and presented a common front.

3: We are against all kinds of coups and moves against our parliamentary democracy.

4: The right of the people to resist is a legitimate means of protecting democracy.

5: Secular, social democratic society is cornerstone of our democracy.

6: Our division of powers between legislature, judiciary and executive is vital.

7: All previous cases like Ergenekon and Balyoz should be looked into.

8: The state structure needs to be cleared of nepotism and based on meritocracy.

9: Faith, identity and lifestyle people should be free in this country… This country deserves the best form of democracy.

10: The state cannot be run based on hate and vengeance. The rule of law needs to prevail. Torture, pressure in response to the coup attempt would put state and putschists on same page and should not be allowed.

The London-based group said some of those being held were being "subjected to beatings and torture, including rape, in official and unofficial detention centres in the country".

Prime Minister Binali Yildirim tweeted that "this country's Turks, Kurds, Alevis" and supporters of the major opposition parties "united together and gave the lesson needed to the putschists".

Turkey has undergone a seismic shift since the night of violence when renegade soldiers sought to topple Erdogan but were stopped by crowds of civilians and loyalist security forces.

In the latest reaction, Yildirim said Turkey would disband Erdogan's 2,500-strong Presidential Guard, saying there was "no need" for the elite regiment.

Almost 300 of its officers had already been detained after some guards forced TV news presenters to read statements declaring martial law during the abortive coup attempt.

Under new police powers decreed as part of a three-month state of emergency, those detained can be held without charge for 30 days.

Erdogan's government has sacked thousands of teachers, professors and civil servants and closed schools and universities.

Also targeted in the sweep was an alleged senior aide to US-based cleric Fethullah Gulen - the reclusive spiritual leader whom Turkey accuses of having orchestrated the plot to overthrow Erdogan.

Security forces detained Halis Hanci in the Black Sea province of Trabzon, a senior official said, describing him as a "right-hand man" to 75-year-old Gulen and responsible for handling finances for him.

The preacher - who lives in a secluded compound in rural Pennsylvania and whose foundation runs a global network of schools, charities and media interests - has strongly denied the accusations against him.

The Armed Forces Chief of General Staff, General Hulusi Akar, described the renegade soldiers as "the vile, uniformed traitors (who) damaged our country, people and our armed forces in a major way. They will face serious punishment". 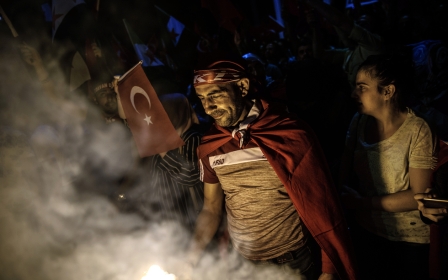