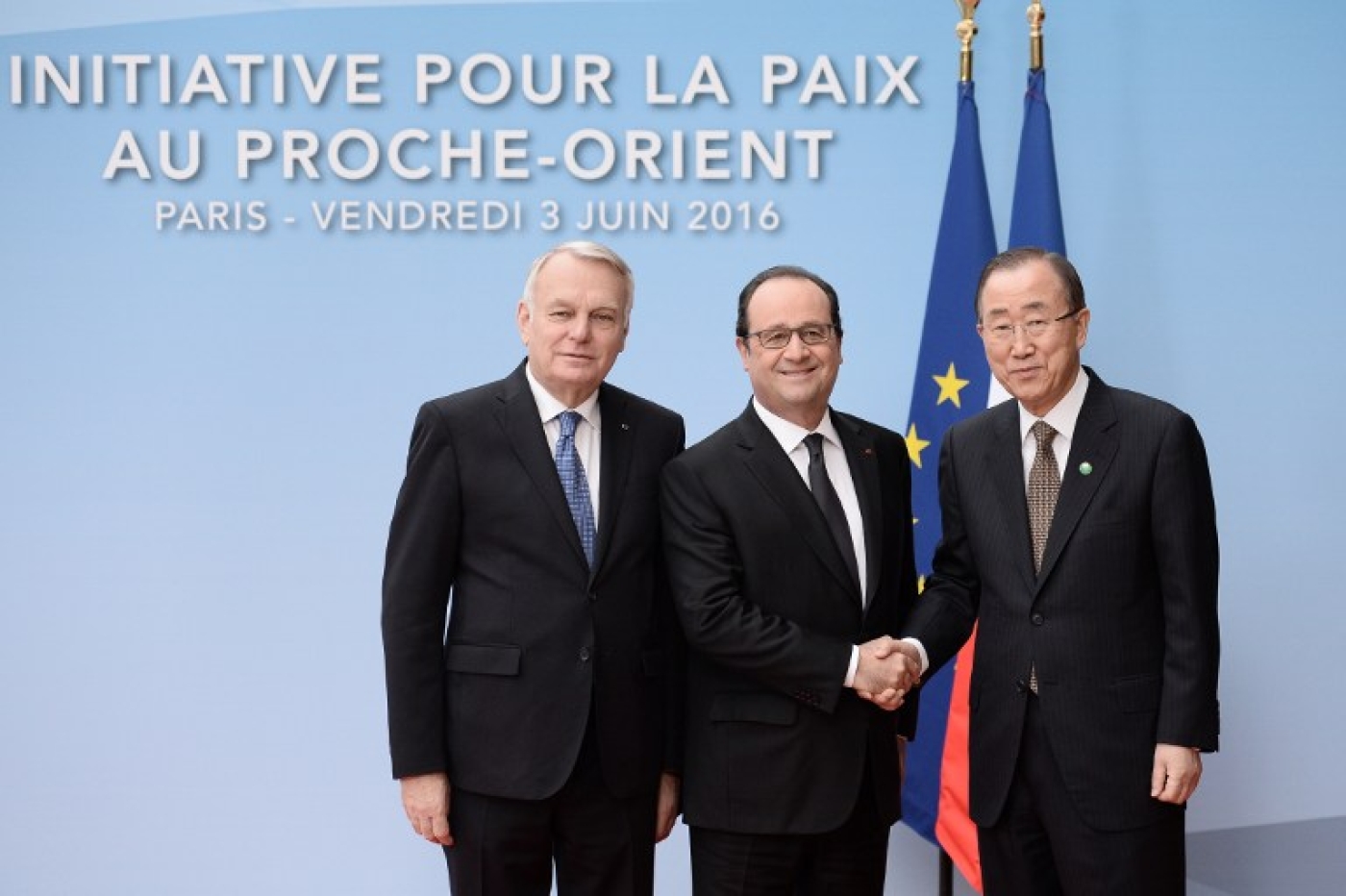 An international summit convened by France with the aim of re-starting the Israeli-Palestinian peace process concluded on Friday with participants reaffirming their commitment to a two-state solution and warning that the status quo in the region is unsustainable.

Senior diplomats from 28 countries and major international organisations including UN Secretary-General Ban Ki-moon and US Secretary of State John Kerry attended the meeting in Paris, which was hosted by French President Francois Hollande, although neither Israel nor Palestine were represented.

In a communique issued at the conclusion of the meeting, the participants said they had met to "reaffirm their support for a just, lasting and comprehensive resolution to the Israeli-Palestinian conflict".

"They reaffirmed that a negotiated two-state solution is the only way to achieve an enduring peace, with two states, Israel and Palestine, living side by side in peace and security. They are alarmed that actions on the ground, in particular continued acts of violence and ongoing settlement activity, are dangerously imperilling the prospects for a two-state solution," the communique said.

Palestinian leaders said afterwards that the meeting was a "very significant step" on the path to peace.

"The Paris meeting is a very significant step and its message is clear: If Israel is allowed to continue its colonisation and apartheid policies in occupied Palestine, the future will be for more extremism and bloodshed rather than for coexistence and peace," PLO secretary general Saeb Erekat said in a statement.

Palestinian Foreign Minister Riad al-Malki said he had "expected a better statement" to emerge from the talks but was waiting to get more information from the French foreign ministry.

But Israel's government, which has called instead for direct talks and dismissed the summit as unhelpful, said it had "pushed peace further away".

"The Paris meeting will go down in history as having only hardened Palestinian positions and pushed peace further away."

Friday's communique also called on both sides to demonstrate "with policies and actions, a genuine commitment to the two-state solution in order to rebuild trust and create the conditions for fully ending the Israeli occupation that began in 1967 and resolving all permanent status issues through direct negotiations" based on UN resolutions relating to the occupation of Palestinian territory by Israel as a consequence of wars with its Arab neighbours in 1967 and 1973.

It said that participants at the meeting had also welcomed a French offer to coordinate international efforts to support a peace process and plans to convene an international peace conference before the end of the year.

Speaking after the meeting, French Foreign Minister Jean-Marc Ayrault said that the prospects of a two-state solution were "getting further away each day".

"We must act, urgently, to preserve the two-state solution, revive it before it is too late," Ayrault said.

Speaking during the meeting, Ban Ki-moon called on Israeli and Palestinian leaders to "pull back from the brink".

Settlement activity is illegal under international law and Israel must cease its policy of expanding settlements, legalising outposts and demolishing Palestinian structures. These actions raise legitimate questions about its commitment to the two-state solution and to its obligations as the Occupying Power," Ban said.

"At the same time, the Palestinian leadership must unequivocally combat violence and incitement, including by clearly condemning all acts of terror.

"It must also reunite all Palestinians under a single, legitimate and democratic Palestinian governing authority, in line with the PLO principles."

It also follows months of violence in which at least 206 Palestinians and 28 Israelis, as well as two Americans, an Eritrean and a Sudanese national, have been killed, mostly in incidents involving alleged knife, gun or car-ramming attacks by Palestinians, according to Israeli authorities.

Some Palestinians were also shot dead by Israeli forces during clashes or demonstrations.

Previously US-backed peace negotiations have been frozen since talks collapsed in April 2014.