The UAE on Wednesday urged an international coalition to tackle terrorism in the region, including combatting the rise of the Islamic State (IS) in Syria and Iraq. The oil-rich Gulf state voiced its opposition to violent extremism and called for regional intervention in countries from Libya to Yemen.

“On the eve of the NATO summit in Wales, the UAE stresses the need for cooperation and coordination amongst the international community, taking advantage of the existing institutional framework,” a foreign ministry statement said. “As terrorism is a global scourge that knows no borders and draws from all parts of the world, the international community must work towards a unified strategy to face this issue at all levels.”

The UAE last year became the first Arab state to open an embassy at NATO and has contributed troops to their operations in Afghanistan as well as loaning war planes for the 2011 intervention in Libya that unseated Muammar Gaddafi.

Last month, four American officials said the UAE unilaterally carried out air strikes in Libya, against militias battling for control of the country’s capital Tripoli. Abu Dhabi was said to have responded with “confusion” to the accusations and has not formally answered the reports.

The foreign ministry statement on Wednesday called for international intervention in Libya, as well as several other countries, to combat what the Emiratis described as “insidious ideologies”.

“An international undertaking ought to apply to other regional countries as well, including Yemen, Somalia, Libya and Afghanistan, who also suffer from radical ideology and incitement to violence emanating from ISIL [IS] and al-Qaeda,” the state said.

“It is important that this [international] strategy does not stop with Iraq and Syria, but seeks to tackle the phenomenon of terrorism wherever it arises. Only through such a unified effort will it be possible to combat terrorist groups and put a stop to their violence.”

The foreign ministry said the UAE supports all efforts to implement UN Security Council Resolution 2170, passed last month in New York. The resolution seeks to cut funds and the flow of foreign fighters both to the IS and to al-Qaeda’s Syrian affiliate, al-Nusra Front.

The statement also explained how the UAE leadership perceives its role in the region.

“The UAE position is firm, calling for the renunciation of terrorism and violent extremism in all its forms,” it said. “By spreading a culture of moderation and tolerance, the UAE has strived to become an oasis of peaceful coexistence in the region.”

Abu Dhabi has provided backing for some Sunni rebel groups fighting to overthrow President Bashar al-Assad in Syria. In 2012 a joint Swiss-Emirati investigation concluded grenades sold to the UAE by Switzerland had been found in the hands of a rebel group in Syria.

The UAE said the grenades were part of a shipment of Swiss hand grenades to Jordan from 2004 to support Amman’s fight against “terrorism”. Switzerland briefly suspended arms to the UAE but restarted them after Abu Dhabi assured Bern that no other weapons had been re-exported. 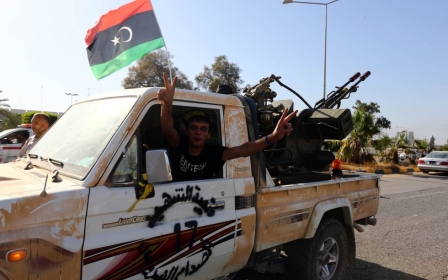