The UK Labour Party has suspended a senior member of the Jewish Voice for Labour (JVL) group after a meeting in which she said she was "uncomfortable" with seeing fellow members suspended over accusations of antisemitism.

Naomi Wimborne-Idrissi made the comments at a meeting of the Chingford and Woodford Green Labour Party in London on Monday, where she also criticised the suspension of former leader Jeremy Corbyn and the disciplinary measures imposed on members of the party for discussing the suspension.

“Yes, I feel uncomfortable," she said.

"I feel bloody uncomfortable seeing damned good comrades and friends of mine being suspended from this party for doing nothing more than trying to discuss the questions which led to Jeremy Corbyn’s unjust suspension - we know it was unjust because he was readmitted - and then the question of the whip being taken from him which is almost certainly unconstitutional in the party.”

According to the Jewish Chronicle, Wimborne-Idrissi, who is also vice-chair of the local party, and the chair, Gary Lafley, were both suspended following the meeting.

Labour has been engulfed in a civil war since Corbyn was suspended in October over his reaction to a report by the Equalities and Human Rights Commission (EHRC), which said the party had acted unlawfully in handling antisemitism complaints. 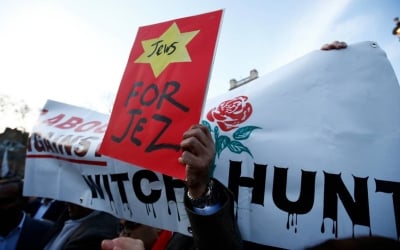 Although Corbyn was reinstated as a party member in November, he has not been restored by leader Keir Starmer as a Labour MP, meaning he currently sits in the House of Commons as an independent.

Starmer said the former leader had "undermined" the EHRC report with his comments that the scale of antisemitism in the party had been "dramatically overstated".

Since Corbyn was elected leader of the party in 2015, numerous Labour members - including many Jewish members - have been suspended over allegations of antisemitism.

Corbyn, a longtime supporter of Palestinians, has consistently faced accusations of anti-Jewish prejudice, in part over his past meetings with the Palestinian group Hamas and the Lebanese movement Hezbollah. He has denied all such allegations.

His successor Starmer has been trying to make a clean break from the Corbyn era as he seeks to turn around Labour's fortunes, after four successive general election defeats since 2010.

One of Starmer's more controversial moves took place in June when he sacked shadow education secretary Rebecca Long-Bailey for sharing an article on social media in which it was suggested that the US police officer who killed George Floyd in Minnesota had received training from Israeli forces.

At the time, Starmer accused Long-Bailey of purposefully sharing an "antisemitic conspiracy theory".

Speaking to Middle East Eye in September, a number of Jewish members of the party discussed their experience of being suspended or disciplined as a result of their comments.

Diana Neslen, 80, a disabled Jewish widow who lives in Ilford, Essex, said she had been issued a warning after she suggested Israeli Prime Minister Benjamin Netanyahu was "making shameless political capital out of the Holocaust".

"These people know nothing about antisemitism and Jewishness. They have no sense that Jewish people have different views."