UK licensed £6.3bn worth of arms to Saudi-led forces in first four years of Yemen conflict Yemeni girl stands amidst the rubble of a building that was destroyed at an unknown date, during reported strikes by Saudi-led coalition forces in Yemen's Hajjah province (AFP)
By
MEE staff

The UK government licensed £6.3bn ($7.6bn) worth of arms to the Saudi-led coalition in Yemen in the four years of the group’s bombing campaign, according to a new report by Campaign Against the Arms Trade (CAAT).

According to new government statistics, since March 2015 the UK has licensed £5.3bn worth of arms to Saudi Arabia, £657m to the United Arab Emirates, £85m to Egypt, £72m to Bahrain, and £40m worth to Kuwait.

The UK also licensed £142m worth of arms to Qatar prior to its withdrawal from the coalition in 2017.

The coalition has been targeting the Iran-aligned Houthi movement, which took control of the capital Sanaa in 2014.

The bombing campaign has resulted in what the UN has branded the worst humanitarian crisis in the world, with more than 20 million people across the country left food insecure and 3.2 million people suffering from acute malnutrition.

"Thousands of people have been killed in the Saudi-led bombardment of Yemen, but that has done nothing to deter the arms dealers," Andrew Smith of CAAT said in a statement. "The bombing has created the worst humanitarian crisis in the world, and it wouldn't have been possible without the complicity and support of Downing Street. These arms sales are immoral and illegal."

The UK Court of Appeal ruled in June that British arms sales to Saudi Arabia were unlawful because the government had illegally approved the sales without properly assessing the risk to civilians.

The government was ordered by the court not to approve any new licences and to retake decisions on current licences.

Last Thursday, legal and human rights activists submitted evidence to the UK government that the Saudi-led coalition had covered up human rights abuses in Yemen.

The report claimed the coalition had "whitewashed significant civilian harm" and that any internal Saudi investigations into allegations had not been credible despite the UK relying on such investigations to justify its sales of weapons to the Gulf kingdom.

Using witness interviews and photographic evidence, the report by The Global Legal Action Network (GLAN) and Yemeni group Mwatana for Human Rights placed blame on the coalition for air strikes it had claimed it was not responsible for and accused it of disproportionate use of force that harmed civilians.

“This evidence will assist the UK government in deciding whether to grant further arms sales licenses for Saudi Arabia," GLAN Director Gearoid O Cuinn said in a joint statement with Mwatana.

"They can either continue to rely on discredited Saudi/UAE-led coalition assurances or listen to those who have painstakingly documented the constant civilian deaths caused by coalition air strikes." 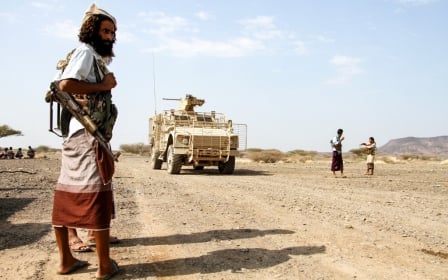