UN calls for bombing pause to allow civilians out of Raqqa The United Nations called on Thursday for a humanitarian pause to allow an estimated 20,000 trapped civilians to escape from the Syrian city of Raqqa, and urged the US-led coalition to rein in air strikes that have reportedly killed hundreds of civilians.

Amnesty International said on Thursday that a US-led coalition campaign to oust Islamic State from Raqqa had inflicted huge numbers of civilian casualties, and those remaining face greater risk as the fight intensifies in its final stages.

"On Raqqa, our urging today from the UN side to the members of the humanitarian task force...is that they need to do whatever is possible to make it possible for people to escape Raqqa," Jan Egeland, UN humanitarian adviser on Syria, told reporters in Geneva.

"Boats on the Euphrates must not be attacked, people who come out cannot risk air raids when and where they come out," he said.

"Now is the time to think of possibilities, pauses or otherwise that might facilitate the escape of civilians, knowing that Islamic State fighters are doing their absolute best to use them as human shields," he said.

Humanitarian pauses were agreed between the warring sides last December to allow the evacuation of civilians from then rebel-held eastern Aleppo, Egeland said.

But he added that the United Nations has no contact with Islamic State fighters who have controlled Raqqa since 2014.

Egeland, referring to US-backed Syrian Democratic Forces (SDF), said: "There is heavy shelling from the surrounding and encircling SDF forces and there are constant air raids from the coalition. So the civilian casualties are large and there seems to be no real escape for these civilians." The UN's warning followed similar comments from Amnesty International about the risk posed by US-led forces against civilians.

The rights group also said Russia-backed Syrian government forces had carried out indiscriminate attacks against civilians, reported to have included cluster and barrel bombs, in a separate campaign against the militants south of Raqqa city.

"Civilians are ... trapped in the city, under fire from all sides," Amnesty said in a report.

It said the SDF, which includes Arab and Kurdish militias, must take more care as they battle for the city's central districts.

"It is imperative that all the parties to the conflict take all feasible precautions to minimise harm to civilians, including ending the use of explosive weapons with wide area effects in populated civilian areas, in compliance with the prohibition on indiscriminate or disproportionate attacks."

IS, which took over Raqqa and its environs in 2014, uses civilians inside the northern Syrian city as human shields and targets those trying to escape with snipers and mines, Amnesty said.

"IS wouldn't let us leave. We had no food, no electricity," a former Raqqa resident told Amnesty, one of 98 displaced individuals it spoke to in northern Syria.

It is difficult to establish how many people have died in the battle for Raqqa.

People interviewed by Reuters displaced by the fighting said air and artillery strikes have killed civilians, and Reuters reporters have seen massive material damage to buildings and infrastructure as they visit recaptured areas.

The Britain-based Syrian Observatory for Human Rights, which monitors Syria's war through a network of on-the-ground contacts, said between 5 June and Wednesday, 24 August it had documented the deaths of 789 civilians, 200 of them children, in Raqqa city as a result of bombardment by the US-led coalition and SDF.

Monitoring group Airwars told Reuters they believe between 725 and 993 civilians have likely been killed from coalition actions in Raqqa city since the offensive began in early June.

Hundreds more civilians have reportedly died after being fired on by Islamic State or being caught in their minefields, Airwars director Chris Woods said.

"Coalition forces have listed 16 reports of alleged casualties in or near Raqqa between 6 and 30 June, dismissing three as 'non-credible', while 13 others are pending assessment," Amnesty said.

It called on the coalition to establish a more transparent and independent reporting procedure.

Human Rights Watch also expressed concern over the use of incendiary white phosphorous by coalition forces in Raqqa in June.

The coalition says it is very careful to avoid civilian casualties in its bombing runs against Islamic State in both Syria and Iraq, and investigates any allegations.

The coalition was unable to provide more recent statistics when contacted by Reuters.

Amnesty criticised the US-led campaign for artillery and air strikes on areas containing civilians and asked for an end to attacks that risk being indiscriminate.

"Whether you live or die depends on luck because you don't know where the next shell will strike, so you don’t know where to run," former Raqqa resident Mohammed told Amnesty.

Whether you live or die depends on luck because you don't know where the next shell will strike, so you don’t know where to run

Syrian government forces, backed by the Russian air force and Iran-backed militias, have also been advancing against IS south of the River Euphrates that forms Raqqa city's southern edge.

Amnesty said residents had told it that air strikes had hit camps where people had fled the fighting.

The group said the testimonials they collected suggested cluster bombs had been used in some of the attacks.

Russia and Syria say they only target militants.

Neither Russia, Syria nor the United States are signatories to the Convention on Cluster Munitions, but international humanitarian law prohibits indiscriminate attacks against civilians. 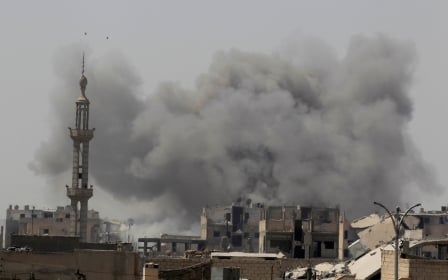