On the last day of UNGA, Syria, Oman, Algeria, and Tunisia speak out on issues ranging from the Yemen war to Western Sahara 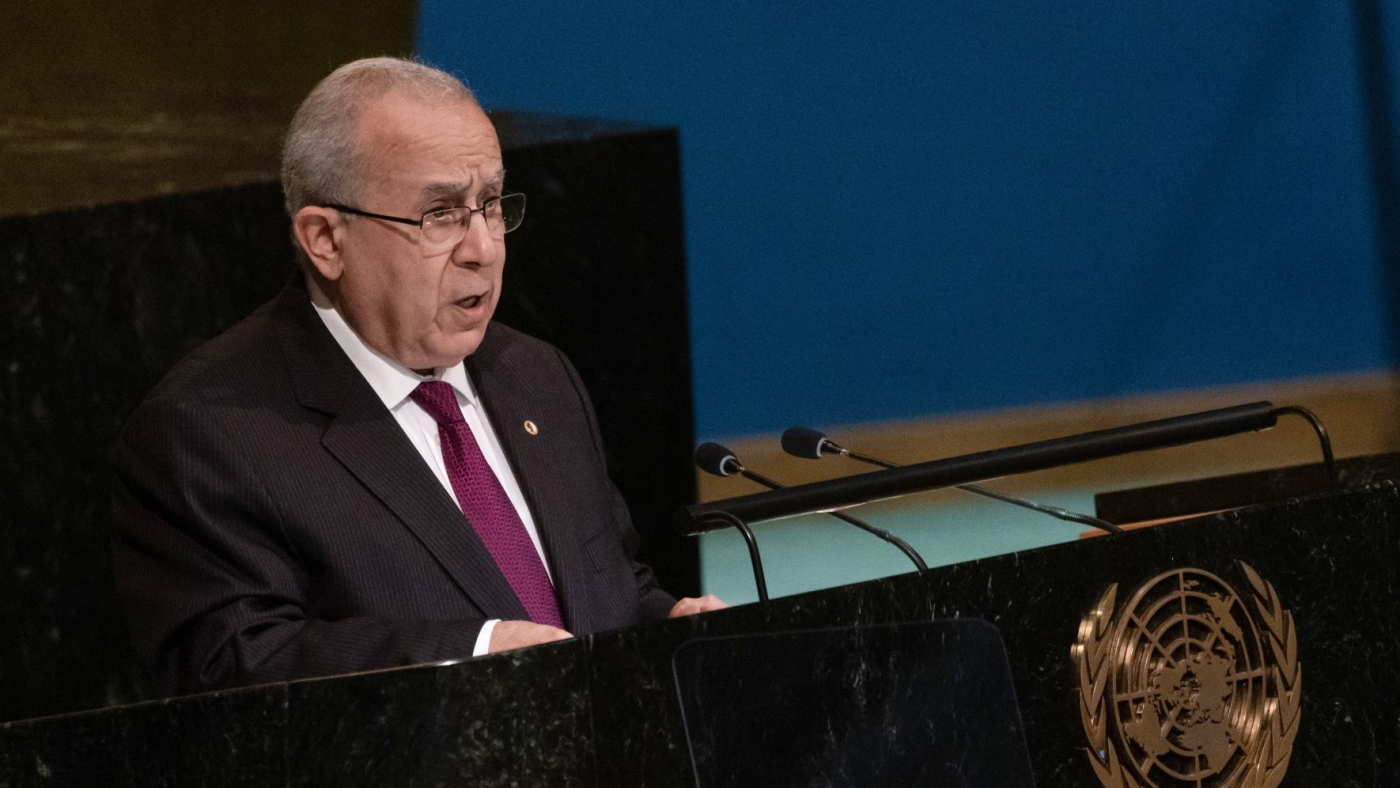 Algerian Foreign Minister Ramtane Lamamra addresses the 77th session of the assembly at its headquarters in New York, on 26 September 2022 (AFP)
By
MEE staff
in
New York City

Monday marked the final day of the United Nations General Assembly, ending a week-long summit that brought together world leaders from more than 100 countries.

The morning's meeting featured several countries from the Middle East with their leaders covering issues ranging from the war in Yemen to support for a Palestinian state to the issue of Western Sahara.

Syria's top diplomat, Faisal Mekdad, called the 11-year war in his country “an attempt by the West to gain control of the world”, during his address on Monday.

Syria descended into civil war in 2011 after anti-government protests erupted over the rule of President Bashar al-Assad. Hundreds of thousands of people have been killed and vast swaths of the country damaged by the fighting. UN General Assembly: Which Middle East leaders are speaking, and when?
Read More »

Mekdad went on to call for the US-led military coalition to leave his country, saying that it violates international law and that fighting terrorism required “coordination” with his government.

“Fighting terrorism does not happen through an illegitimate international coalition that violates Syria's sovereignty and destroys towns and villages,” he said.

Backed by Russian air power and Iranian ground forces, Assad’s government has been able to retake about two-thirds of the country.

Kurdish militias, mainly the YPG and SDF, control Syria’s northeast with US backing which includes a contingent of 800 troops. An array of rebel groups, several with Turkish backing, hold a corridor of territory around Idlib province in the northwest.

Mekdad demanded that Damascus receive compensation for losses suffered by its oil and gas industry during the war, claiming that the “direct and indirect” impact on Syria’s energy sector had reached $107bn.

Most of Syria’s oil and gas wealth is located in territory controlled by US-backed Kurdish forces.

During the war, the Islamic State militant (IS) group conquered much of the country. While IS was territorially defeated in 2019, more than half of the country’s pre-war population is internally displaced.

The cost of Syria’s reconstruction is estimated to be between $250 and $400bn. The country remains under US and western sanctions.

Mekdad also offered support for Russia’s invasion of Ukraine, in a nod to the close relationship between the two countries.

“Syria reiterates its position on Russia's special military operation in Ukraine and Russia's right to defend and secure its own territory," he told the world body.

"We are convinced that the Russian Federation is defending not only itself but justice and humanity's right to reject unipolar hegemony.

In recent weeks, Ukraine has gone on the offensive and managed to claw back some of its territory occupied by Russia. Last week, the Kremlin invoked a partial military mobilisation, sparking protests and efforts by many to flee the country.

Some countries bordering Syria, such as Turkey and Jordan, are concerned that if Russia is forced to redeploy troops from Syria to Ukraine, it will create a vacuum filled by Iran-backed militias.

The speech given by Othman Jerandi, Tunisia's foreign minister, focused on the issues of multilateralism, and Jerandi iterated Tunisia's support for the Paris Climate Agreement and the UN's sustainable development goals.

Near the end of his speech, the foreign minister spoke about the necessity of each country to have "sovereignty" over its political affairs.

Jerandi's comments come more than a year after Tunisian President Kais Saied announced a set of controversial measures, revealed by Middle East Eye two months earlier, including the suspension of parliament and the prime minister's sacking, which were denounced as a coup by rights groups and opposition parties.

Saied shut down the country's independent anti-corruption authority and sidelined the national election authority, later dissolving the supreme judicial council and granting himself control over the selection and promotion of judges.

This past July Saied's government held a referendum over a new constitution which passed with the "yes" vote garnering 92.3 percent. However, overall voter turnout was less than 30 percent.

"Democracy for Tunisia is a national choice. One that it will not deviate from," Jerandi said.

"This is the will of the people of Tunisia, which are committed to ensuring the preservation of its freedoms, its security, its constitutional rights, the rule of law and the sovereignty of its people in different regional and international bodies."

The Tunisian diplomat also spoke about the food and energy crisis brought on by Russia's war in Ukraine.

"The world is facing an acute energy and food crisis due to perturbations in the supply chain to the world. There's an unprecedented increase in the price of foods. There's a decrease in purchasing power."

On Sunday night, hundreds of Tunisians protested in the capital city Tunis against rising costs, poverty, and food shortages.

Earlier this month, Tunisia's government raised the price of fuel by three percent and cooking gas cylinders by 14 percent - the first such hike in 12 years.

Inflation in Tunisia sits at nearly nine percent and the country also faces a shortage of various food items because it cannot afford to pay for some imports.

Oman's ambassador to the UN, Mohamed al-Hassan, reiterated support for the UN-led efforts at negotiating long-term peace in Yemen, which has been marred by years of war. Oman is the country's neighbour.

"My country continues to spare no effort through constructive cooperation with all parties to achieve peace in the brotherly Yemen," Hassan said during his speech on Monday.

"While the sultanate of Oman welcomes the extensions of a truce, it appeals to all Yemeni parties to come to terms with a painful past and focus on formulating a promising and a better future for a country that will preserve their unity, security and stability."

The Yemen truce was first announced in April and was extended for two months in June and again in August. It has brought much-needed respite from fighting that, according to the United Nations, was likely to have claimed the lives of 377,000 people by the end of 2021.

The truce led to a 60 percent drop in civilian casualties, with most now occurring as a result of landmines and unexploded ordnance, the UN has said. The number of displaced people has been reduced by half. International flights have resumed in a limited capacity from Sanaa and fuel shipments to the Houthi-controlled port of Hodeidah have increased.

According to the United Nations, more than two-thirds of Yemen's 30 million people rely on humanitarian aid to survive. Oman, which is not a member of the Saudi-led coalition that entered into a war with the Houthis in 2015, has played a mediating role in the Yemen conflict over the years.

In April, following negotiations with Muscat, Yemen's Houthi movement released 14 foreigners from captivity, including a British man; seven Indian nationals; a Filipino; an Indonesian; an Ethiopian; and a Myanmar national.

Throughout Yemen’s six-year war, Oman has kept its borders open, providing a lifeline for Yemenis.

Oman has accepted thousands of Yemeni refugees, treated wounded civilians and fighters and has been described by former UN special envoy for Yemen Martin Griffiths as playing a “pivotal role” in helping Yemen’s people.

"Oman has been helping Yemenis since the beginning of the aggression in Yemen and it welcomed Yemenis during the most difficult times," a Houthi source previously told MEE.

Algeria threw its support behind President Mahmoud Abbas's appeal for the State of Palestine to become a full-fledged member of the United Nations.

The North African country’s top diplomat, Foreign Minister Ramtane Lamamra, backed the move in his address to the UN, where he reiterated Algeria’s longtime support for the formation of an independent Palestinian state along the 1967 lines, with Jerusalem as its capital.

“Addressing the question of Palestine remains the key to restoring security and stability in the Middle East region,” Lamamra said. He also called for an end to the Israeli occupation of the Golan heights.

Lamamra also said that Algeria is working to promote “national unity” inside Palestine.

In July, Abbas and Ismail Haniyeh, the head of Hamas, which governs the besieged Gaza Strip, held a rare meeting in the capital city of Algiers.

Algerian state television lauded the meeting as “historic”. The PA, which is dominated by the Fatah party, and Hamas, have long been at odds over a range of political disagreements. An attempt by Fatah to replace Hamas in the Gaza Strip led to several weeks of fighting.

Lamamra’s remarks come at a time of increasing unrest in the occupied West Bank, as Israel routinely carries out raids in the territory.

"Algeria reaffirms its support for the rights of the fraternal people of Western Sahara to put an end to the occupation of their territory so that they can exercise their inalienable right to self-determination.”

Western Sahara is a sparsely populated territory that was annexed by Morocco in 1976.

Rabat controls about 80 percent of the territory with the remaining landmass under the governance of the Polisario Front, a rebel movement that established the self-declared Sahrawi Arab Democratic Republic in 1973.

Around 175,000 Sahrawi refugees live in camps across the border in Algeria. Rabat has long accused its neighbour of arming the rebels, a charge Algeria denies.

In 2021, the Trump administration recognised Morocco's claim of sovereignty over Western Sahara, in step with Rabat's normalisation of ties with Israel. The Biden administration has not reversed that decision.