US 'builds combat base in Iraq's Anbar province to fight IS' 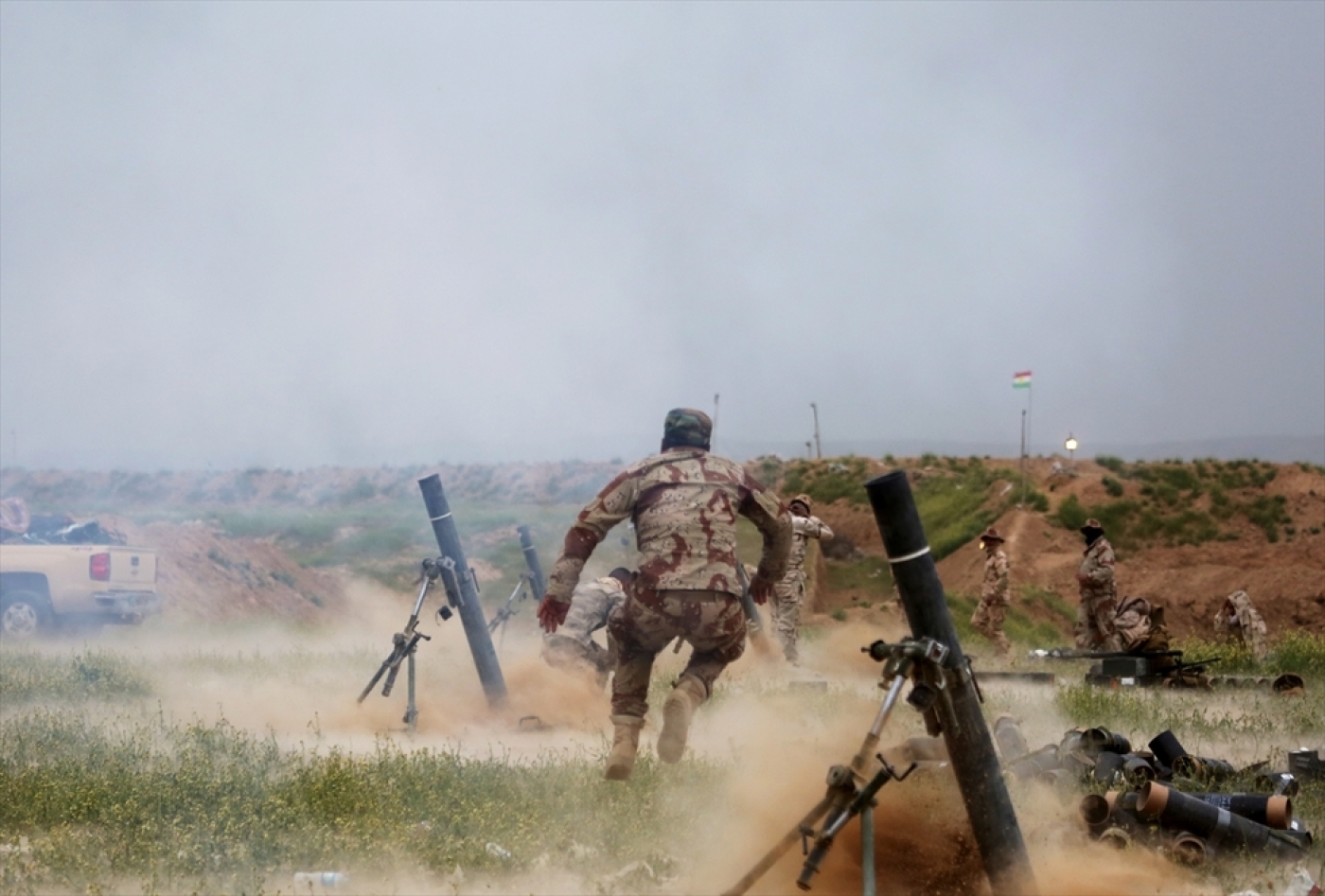 Iraqi soldiers attack IS positions near the town of Makhmour. US forces are supporting an Iraqi offensive in Nineveh province (AA)
By
Suadad al-Salhy

BAGHDAD - Hundreds of US troops have established a base in Iraq's western Anbar province to fight the Islamic State (IS) group, Iraqi security sources have told Middle East Eye, days after the US military admitted it had built a similar base in northern Iraq that could operate independently of Iraqi forces.

Iraqi security officials told MEE that more than 200 US combat troops had set up artillery at the site attached to Ein al-Assad Iraqi military base, in western Anbar. The site will allow US troops to monitor the border with Syria, block the transfer of militants from IS-controlled Deir Ezzor in Syria, and launch combat missions.

"Their mission is to tighten the grip on the border so the Iraqi army will be able to finally liberate Anbar," a senior Iraqi counter-terrorism unit officer, speaking on condition of anonymity, told MEE. "Even their artillery was deployed there."

Another senior Iraqi military source told MEE: "These troops will independently conduct fighting missions against Daesh [IS]," but the source added that US commanders had said they would also operate alongside Iraqi troops when appropriate.

The new base in Anbar would be the first independent US presence in the province since 2011.

Iraqi intelligence officials told MEE that the US troops would hunt IS convoys travelling between Iraq and Syria and conduct air missions to arrest and terminate high profile IS commanders.

Information already collected by this unit led to the bombing of an IS chemical weapons laboratory in the city of Hit last week. The strike was one of the biggest in months - US coalition jets used more than 60 missiles to completely destroy the building.

"Essentially, the mission of these troops is preventing the infiltration of IS fighters from Riqa [a Syrian border city] to Qaim and Karabala [Iraqi border cities]," Fadhil Abu Ragheef, a security analyst close to the Baghdad government told MEE.

"The involvement of these troops in the ongoing operations will accelerate the liberation of cities and free more Iraqi troops to move to Mosul," Abu Ragheef said, referring to Iraq's second-largest city, which has been held by IS since June 2014.

"The next target of the Iraqi army is Fallujah and Qaram, but they have to retake all the towns located in western Ramadi first."

The US denied reports of the Anbar base. Chief spokesman Colonel Steve Warren told MEE: "There is no undercover missions. The government of Iraq has invited an additional 200 soldiers to go to Makhmour ... to live together with the Iraqi soliders ... to do training and give them advice and information. No combat missions."

However, the denials came after Pentagon chiefs revealed on Monday the existence of "Fire Base Bell" near Makhmour, northern Iraq, following the death there of a US soldier in an IS rocket attack.

Colonel Warren said it was the first time the US had established a "geographically separate" base for American soldiers since the beginning of the war against IS in August 2014. He added that its purpose was to protect Iraqi forces and their American advisers at Makhmour.

A US military spokesman also confirmed soldiers from Fire Base Bell were involved in the launch of an offensive on Thursday that will eventually widen into a push on the city of Mosul, the IS stronghold in northern Iraq. US forces used artillery and air strikes to aid Iraqi forces take several villages around Makhmour, Iraqi and US spokesmen told MEE.

The US has sent about 4,000 soldiers to Iraq, including Marines in northern Iraq and soldiers at Speicher base in Salahideen province and al-Bakir military base in Baghdad. According to Iraqi officials, about 1,800 members of the 101st Airborne Division were deployed in military base across the country.

IS seized vast areas of Anbar and adjacent eastern Syria before declaring itself a caliphate in 2014. Iraqi forces backed by multiple sect paramilitary troops and US air power have since made significant progress in Anbar, retaking large areas of the capital Ramadi. However, IS still controls key border towns and crossing points.

"The priority now is Anbar. These border towns have to be re-taken, so the Iraqi army will be free to raid [the IS-held city of] Fallujah," a senior military officer in Anbar who declined to be named told MEE.

Fallujah is one of the most prominent IS strongholds in Anbar, and was the first Iraqi city fall into the hands of the group in late of 2013.