US deemed 'terrorists' fighting to defeat the Islamic State

The UK, US and NATO consider the PKK a terrorist organisation but their fighters have found themselves in an unlikely partnership in Iraq's latest war 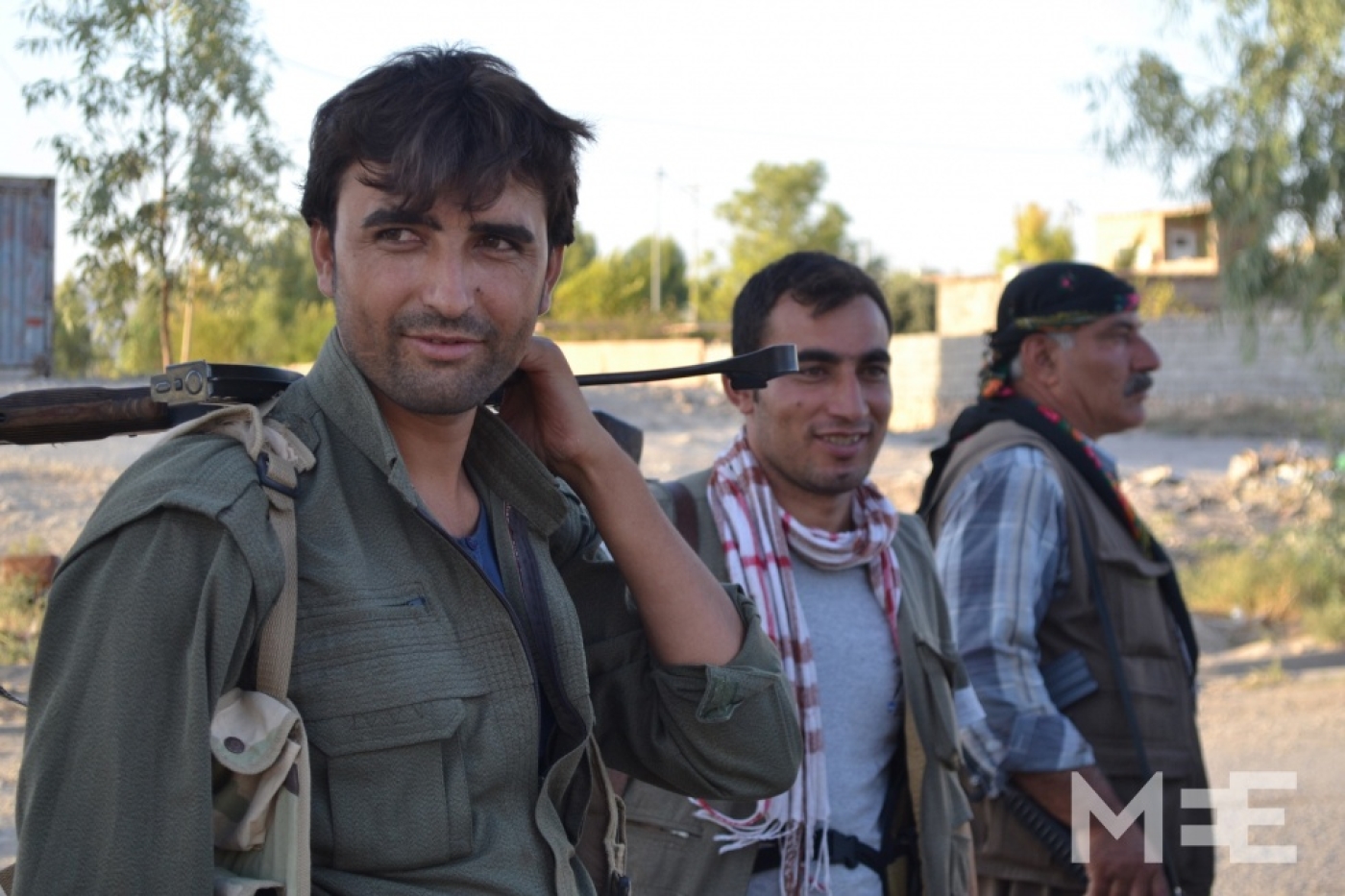 PKK fighters talk with MEE in the Makhmour Refugee Camp, often referred to simply as 'The PKK Camp' (MEE/Sheren Khalel)
By
Sheren Khalel and Matthew Vickery

Sitting non-chalantly with a loose fitting belt and several grenades hanging off at different angles does not seem like a natural way to relax. But PKK fighters in Makhmour Refugee Camp - often referred to simply as “the PKK camp” - in the Iraqi Nineveh Plains do a good job of making it seem normal. Islamic State militants lie just half a kilometre away, and no one is taking any chances, even though the IS have not attempted an advance for days.

PKK guerrillas have been instrumental in pushing back the militants in the Nineveh Plains alongside Kurdish Regional Government (KRG) Peshmerga fighters and US airstrikes over the course of this month. Yet, along with the likes of the UK and Nato, the US considers the PKK a terrorist organisation – now they have found themselves in an unlikely partnership in Iraq’s latest war.

Tagosher Zarros, the militia general for this particular PKK outpost, wears an olive green “Jli Kurdi,” the traditional Kurdish suit, with an intricately designed red and orange scarf wrapped snugly above his waist. He towers over the rest of the people around him, his authoritative stance in stark contrast to his soft voice.

Much of the aggressive and dangerous frontline fighting over the past month against the militants, who now control an area slightly larger than the United Kingdom, has been credited to the PKK. Although Zarros was keen to insist that no Kurdish fighter - despite their battle experience, or aligned group - was stronger than the other.

“All we can do, all the Kurds can do, is to help each other, because other countries won’t help us fight these people by giving us weapons,” Zarros said.

Fighting appears to be a natural profession for the PKK militants. The group is best known for its decades-long armed-resistance against Turkey, where Kurds have been persecuted throughout Kurdish history in the region.

The towering rocky slopes of the Qandil Mountains on the Turkey-Iraq border, 100 kilometres north of the camp, have provided the guerrilla group refuge for decades. As a result, the mountains of Qandil have been peppered by Turkish bombs for generations.

Back at camp, armed guards blocked the entrance, checking cars and speaking to drivers before lifting the heavy metal blockade to allow entry. The place feels like a military compound, rather than a small UNCHR refugee camp. Established in 1998, it is home to around 12,000 Kurdish refugees who fled Turkey in the early 90s. The red star-emblazoned communist flag of the PKK flies high throughout the camp, while PKK imagery is scrawled on buildings, signs, and the pick-up trucks guerrilla fighters take out to the frontlines.

Every individual appears to have a gun slung casually round their shoulder, while many have belts with several grenades attached to them. Unlike KRG Peshmerga fighters in the region, the PKK fighters appear stern and hardened - career guerrillas who have spent their lifetime in a state of war.

Their fighting experience has been invaluable in the fight against the ever aggressive and expanding IS militants that now control the majority of Iraq’s Nineveh Plains.

“Many of our people have gone to Sinjar to fight the Islamic State and they are still there now,” PKK guerilla Karkar Chinar told MEE. “We are fighting hard, from Sinjar to Makhmour. Our brothers from Rojava [Syrian Kurdistan] are fighting with us as well. We will push them [Islamic State] out of Kurdistan.”

In Sinjar, the PKK, along with the People’s Protection Unit (YPG) from Syrian Kurdistan, were accredited with helping to fight back the IS. The groups provided a safe corridor of passage for Yezedis stuck on Mount Sinjar, after the religious group had been targeted, and scores massacred by the militant group. Over 50 Yezedis starved on the mountain waiting for rescue before the intervention.

In Makhmour, the PKK fought alongside the KRG Peshmerga and a small group of volunteer townsfolk after United States airstrikes. The forces pushed back the IS and put further land under Kurdish control and protection. The PKK sent hundreds of fighters from their base in Qandil to retake the area. IS militants could only hold the town for two days before retreating.

The fate of Kurds in the KRG, and of their nation, has driven PKK fighters to the frontlines across the region.

Badrun Ahmad, now based in the camp after travelling from Turkey, slings an AK-47 over his shoulder as though it was an extra limb. Ahmad has stayed in the area to defend the Makhmour frontline.

He wears a thick belt strapped around his waist with a handgun, extra bullets and two ancient looking knives, while a string of modern looking grenades hang casually off his sides. He smiles friendlily and with ease, as if he wasn’t armed for a battle that could erupt at any moment on the ever-fluid frontiers.

While Ahmad said he is ready for battle, he is also well aware of how daunting the enemy he and his comrades are now facing has become.

“This is a new enemy, a different enemy, an enemy that does not care for who they kill, man, women, child, elderly, soldier or non-soldier,” Ahmad said. “With our last breath we will fight to save the PKK and all Kurdistan. We are fighting not just to save ourselves. We are fighting in all four areas of Kurdistan. Anyone coming against us or against Kurdistan, will be challenged, we will protect Kurdistan.”

The brutality of the IS in its killing of minority groups, and mass executions of civilians, has not just drawn the PKK into the fight. With the US now involved, both the US and the PKK are fighting side-by-side.

The irony is not lost at the PKK camp, which sits snug against the Qarachukh Mountains. The fighters display wry smiles when the reality that the US is fighting alongside a group they designate as terrorists is mentioned.

Such a designation resulted in the arrest of PKK founder and leader, Abdullah Ocalan in 1998 by Turkish forces for his activity within the guerrilla group. On the nearest peak at the Makhmour camp a strange formation of black rocks spells out “APO” the nickname -  short for uncle in Kurdish - given to Ocalan, who remains imprisoned, serving a life term in Turkey.

Scanning the camp below the peak, countless PKK flags fly high and proud. The camp itself, however, is only half-full. Now scattered in towns and villages fighting the IS, men and women of the camp have taken their weapons and under the flag of the PKK, and the banner of Kurdistan, they have faced death once again.

“The Islamic State have more power than us, but with our small guns, we can still push them out,” Chinar said. “They are crazy and they have good weapons, modern weapons, and American vehicles for war. But we believe in our fight, more than they could ever hope to. We stand for something we know is good.”

The IS’s more sophisticated and modern weaponry is a common grievance amongst all of the Kurdish militia groups fighting against the militants. The PKK guerrillas are ready and willing to fight, and have already been doing so for weeks - and with some success. But at the PKK camp, fighters were adamant that if they had the same weaponry, the IS would be a lot further than just half a kilometre away. 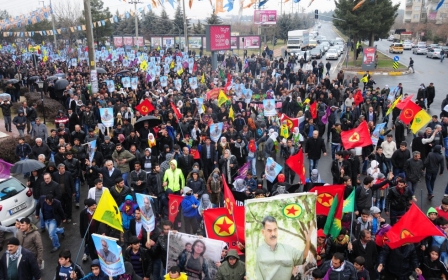