The Palestinian Authority has denounced David Friedman's statements as having 'nothing to do with logic, justice or law' US ambassador to Israel David Friedman says 'Israel has the right to retain some, but unlikely all, of the West Bank' (AFP/file photo)
By
MEE and agencies

The US ambassador to Israel told the New York Times that Israel has the right to annex at least "some" of the occupied West Bank, in comments likely to increase Palestinian opposition to a long-awaited US plan.

Palestinian leadership has rejected the plan before it has even been fully unveiled, citing a string of moves by the administration of US President Donald Trump that they say show its irredeemable bias in favour of Israel.

In the interview published by the New York Times on Saturday, US Ambassador to Israel David Friedman said that some degree of annexation of the West Bank would be legitimate.

US Amb “Israel Has Right to Annex”. This is what happens when “our” Ambassador is a guy who funded an Israeli settlement & owned an apartment in Jerusalem before he got the job. Not accusing him of dual-loyalty. Just pointing out a reality. It’s a disgrace https://t.co/FMbHUSbapo

"Under certain circumstances, I think Israel has the right to retain some, but unlikely all, of the West Bank," he said.

It was unclear which West Bank territories Friedman meant and whether Israel's retention would be part of a peace accord that includes land swaps - an idea floated in past negotiations - rather than a unilateral move such as annexation, Reuters said.

President Trump’s ambassador provides enough background in order for everyone not to attend the Manama meeting: Their vision is about annexation of occupied territory, a war crime under international law. https://t.co/RqDSdcK3Gx

Meanwhile, a Palestinian Authority (PA) spokesman said Friedman was one of several figures leading US policy on the issue of Israel and Palestine who were "extremists" lacking in "political maturity".

The PA foreign ministry said it was looking into filing a complaint with the International Criminal Court (ICC) on the issue.

“By what logic does Friedman think that Israel has the right to annex parts of the West Bank?” the ministry asked in a press release on Sunday. “On what reality did he base his conviction? On international law prohibiting the annexation of territory by force? Or the reality imposed by the occupation authorities?

The ministry went on to call Friedman a “person who is illiterate in politics, history and geography, and who belongs to the state of the settlements...[he] has nothing to do with logic, justice or law unless they serve the occupation state, which he is eager to defend by all means”.

Israeli settlement watchdog Peace Now called on Saturday for Trump to remove Friedman from his post if he wanted his peace efforts to have any credibility.

"Ambassador Friedman is a Trojan horse sent by the settler right, which sabotages Israel's interests and the chance for peace. The price will be paid by the residents of the area, not by Friedman or Trump. The US president, if he means to serve as a fair mediator, ought to send Friedman packing this evening," Haaretz quoted Peace Now as saying. The establishment of a Palestinian state in territories, including the West Bank, that Israel occupied in the Six-Day War of 1967 has been the focus of all past Middle East peace plans.

However, Palestinians are increasingly stating that the two-state solution, as it is known, has long become unfeasible due to Israel's efforts to cement control over Palestinian lands and increase its illegal settlement building.

The status quo, some argue, makes a one-state solution with equal rights for both Israeli and Palestinian citizens the only just option to guarantee self-determination and human rights for all.

No firm date has been set for the unveiling of the Trump administration's plan, colloquially known as the deal of the century, although a conference is to be held in Bahrain later this month on its economic aspects.

The public comments made by US administration officials so far suggest the plan will lean heavily on financial support for the Palestinian economy, much of it funded by the Gulf Arab states, in return for concessions on territory and statehood.

"The absolute last thing the world needs is a failed Palestinian state between Israel and Jordan," Friedman said in the Times interview. "Maybe they won't take it, maybe it doesn't meet their minimums.

"We're relying upon the fact that the right plan, for the right time, will get the right reaction over time."

Friedman, a staunch supporter of Israel's illegal settlements, told the Times that the Trump plan was aimed at improving the quality of life for Palestinians but would fall well short of a "permanent resolution to the conflict".

Still, he said the United States would coordinate closely with Arab ally Jordan, which could face unrest among its large Palestinian population over a plan perceived as overly favourable to Israel. Palestinians overwhelmingly reject an economy-centred plan to resolve the 71-year-long conflict which has led to the forced displacement and exile of millions of refugees and the imposition of a brutal and discriminatory military occupation on those who have remained.

Publication of the deal of the century looks set to be further delayed after the Israeli parliament called a snap general election for September, the second this year.

The plan may be regarded as too sensitive to release during the campaign.

During campaigning for the first general election in April, Prime Minister Benjamin Netanyahu pledged to annex settlements to Israel, a move long supported by most lawmakers in his alliance of right-wing and religious parties.

Following persistent expansion of the settlements by successive Netanyahu governments, more than 600,000 Jewish settlers now live in the West Bank and annexed East Jerusalem, in violation of international law.

A US official, speaking on condition of anonymity, told Reuters: "No plan for unilateral annexation by Israel of any portion of the West Bank has been presented by Israel to the US, nor is it under discussion." 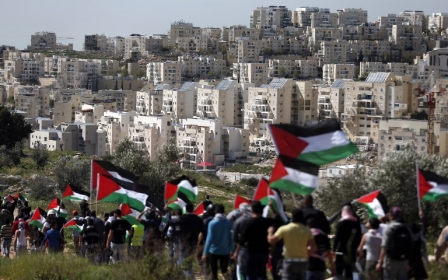