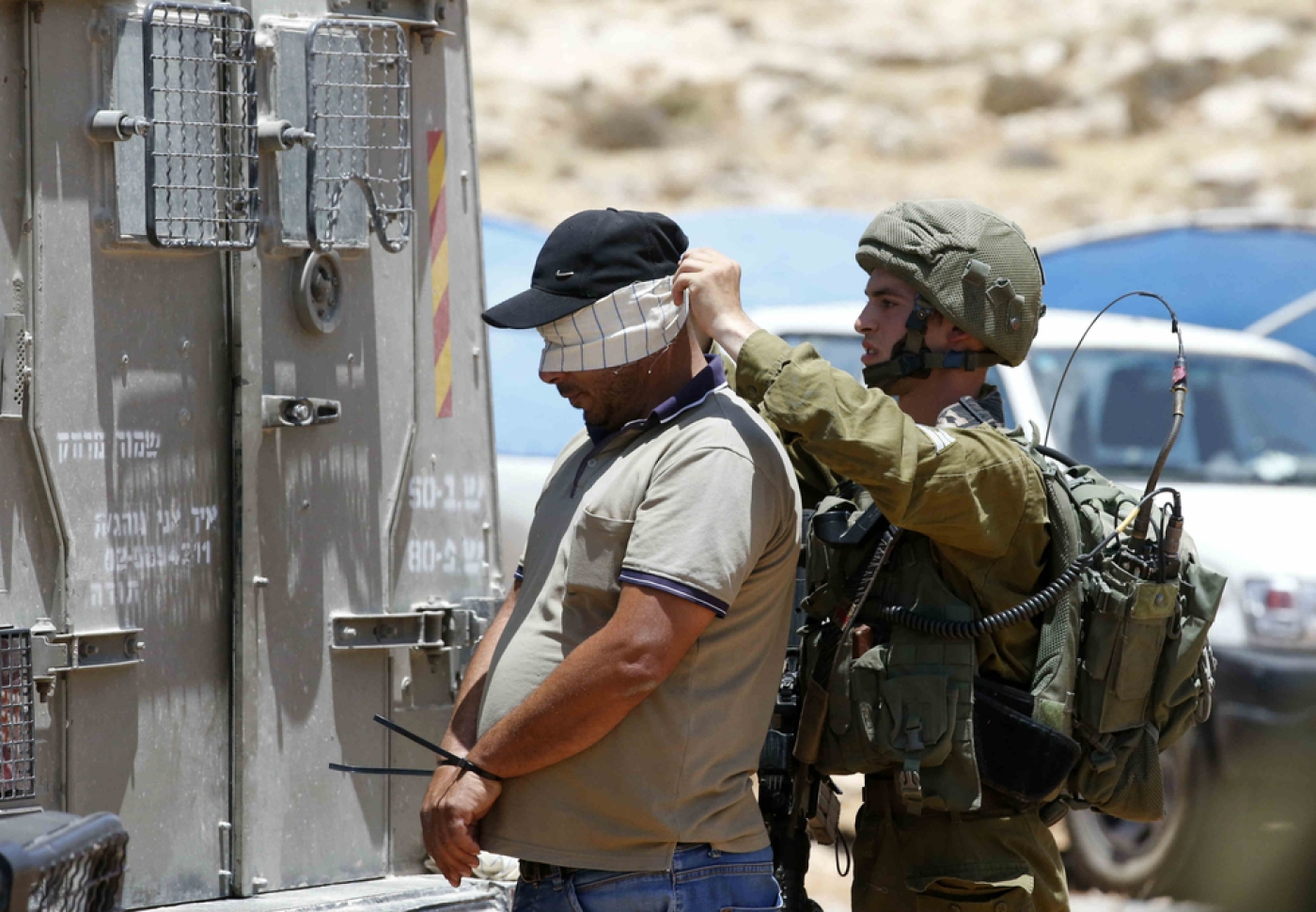 An Israeli soldier blindfolds a Palestinian protester in the occupied West Bank east of Hebron, on 23 June 2018, detained after protesting against the expropriation of Palestinian land. (AFP)
By
MEE staff

Five American Jews visiting Israel as part of the "Birthright" programme left the tour on Thursday in protest at the treatment of the occupation of the West Bank, saying organisers were refusing to tell the truth when asked critical questions.

Instead, the youths, who were partaking in the free 10-day tour designed to attract Jews from around the world to move to Israel and take Israeli citizenship, visited the West Bank city of Hebron led by anti-occupation NGO Breaking the Silence.

Israel "is not providing the kind of education that we really need ... and is telling a one sided story," one of those leaving the tour said. "This is not fair, and we deserve the truth."

Breaking the Silence is made up of Israeli army veterans who seek to raise awareness of the effects of Israel's occupation of the West Bank and its siege of the Gaza Strip.

Hebron, the largest city in the West Bank, is a flashpoint area where Israelis have illegally settled in the city centre, cutting entire areas off for Palestinians.

In a statement the youths released after they abandoned the tour, the Americans said Birthright would not engage with their questions truthfully.

"We each came on this trip separately with hope that - especially in light of the recent killings of more than a 100 protesters in Gaza and Trump moving the US embassy to Jerusalem - Birthright would trust its participants enough to give us an honest education," the statement said.

"We came with questions about what's happening in the occupied territories and wanted to engage with new perspectives, but what became clear over the course of 10 days was that Birthright did not want to truthfully engage with our questions," it added.

"It's clear that young Jews who have critical questions about Israel are not welcome on Birthright. It's shocking that given all the recent violence Birthright would continue to act as if we can't handle the truth."

The quintet live-streamed their abandonment on Facebook, and images showed them arguing with Birthright organisers and participants.

In the live stream, one of the five, Katie Anne, said: "Birthright gave us a map of Israel that does not denote the West Bank [even though] the director of our Birthright organization admitted that the majority of maps in Israel do include [it]. They keep saying they're apolitical but this is clearly to the right."

In the footage, a Birthright organiser is seen attempting to distract other participants and stop a statement being read out, saying it was not fair to him and the rest of the group.

He accused the five of pulling "a fast one" and saying that their actions were not acceptable.

In response to the Americans’ stance, Birthright insisted it was an apolitical project.

"Since we respect our participants' abilities to form their own opinion, we reject the promotion of any agenda and any attempt at manipulation of provocation by any political side," the organisation said.

However, in November Israeli daily Haaretz reported that Birthright had instructed its staff to avoid organising meetings between participants and Palestinians with Israeli citizenship.

Birthright's largest donor is Sheldon Adelson, who has made billions of dollars from his casinos and is an open supporter of the Israel's right-wing government and the US Republican Party.

"The Israeli pro-occupation camp's demand that the Jewish diaspora blindly support the military regime in the territories is driving away a generation of liberal Jews," Breaking the Silence said.

"But while Israel's right-wing extremist government is breaking the bond between Israel and the Jewish diaspora, we are building new bridges based on values of equality and democracy.

"We were happy to respond to the Birthright participants' invitation and invite anyone who visits Israel or the occupied territories to come on a tour to the places we served as soldiers and see the moral price of oppressing millions of Palestinians under a military regime," it said.