US lawmaker leads call against 'hacking for hire' after NSO blacklisting In July, US Congressman Tom Malinowski first led a congressional call for the US to take action against NSO (AFP/File photo)
By
MEE staff
in
Washington

US Congressman Tom Malinowski has led a call against the private hacking industry, saying last week's move by Washington to blacklist the Israeli spyware firm NSO was not meant to be against Israel, adding that any attempt to reverse the blacklisting was unlikely to be successful.

"This is not directed at Israel," the Democratic lawmaker said on Wednesday, as quoted by the Jerusalem Post, during a visit to Israel with a bipartisan congressional delegation. "It is directed at a global private industry of hacking for hire."

Malinowski said the problem is "not about Israel or NSO per se. It is about what should be done to regulate out-of-control private hacking".

Hacking is "a sensitive technology that should be carefully controlled by the US and our democratic allies", he said. "It should not be allowed to proliferate more than sensitive missile or sensitive nuclear technologies to countries likely to misuse it."

The US Commerce Department announced last week that it was placing NSO and another Israeli company, Candiru, on a blacklist, arguing that the two firms acted "contrary to the national security or foreign policy interests of the United States".

Regarding reports that Israel will try to lobby the US to remove NSO from the blacklist, the lawmaker said a reversal was "not likely, not gonna happen".

In July, Malinowski first led a congressional call for the US to take action against NSO, following reports that its spyware Pegasus was used by governments, including the United Arab Emirates, Morocco and Saudi Arabia, to illegally access the phone data of activists and journalists worldwide.

The statement, issued by Malinowski and three other House Democrats, called on the US government to "consider the immediate addition of the NSO Group and any other company engaged in similar activities to the Entity List administered by the Commerce Department".

US consulate in Jerusalem

Malinowski addressed the NSO issue as a part of a bipartisan and bicameral delegation's trip to Israel, led by Democratic Senator Chris Coons, where US senators and members of Congress met with Israeli Prime Minister Naftali Bennett. During their visit, the Israeli premier reportedly reiterated Israel's stance that it would not allow Washington to reopen the US consulate in Jerusalem that served Palestinians.

"I am not going to make a campaign or try to score political points over this issue, but the government position is that reopening the consulate is unacceptable," Bennett told the delegation, according to the Axios news site.

In May, US President Joe Biden's administration had announced plans to reopen the consulate, which was shuttered by former President Donald Trump in 2019.

The intended move, however, has put the administration in a difficult spot with Palestinian officials urging the president to follow through on what was a campaign promise from Biden and Israeli officials being opposed to the move, arguing it would endanger Bennett's fragile coalition government.

Palestinian Prime Minister Mohammad Shtayyeh said on Wednesday that Washington does not need Israel's "permission" to reopen its consulate. However, a senior State Department official recently told a group of US senators that Israel's permission would be required. 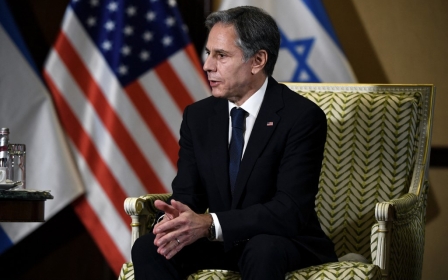 Occupation
US will move forward with plan to reopen Jerusalem consulate, says Blinken