US military aid to Egypt a 'green light for repression,' say former prisoners The US government announced on Wednesday that it would release $195m earmarked for spending on American military hardware following a visit to Washington by a senior Egyptian military delegation.

The decision came on the same day of a congressional hearing in which a panel of security and human rights experts recommended using the aid freeze to pressure Egypt to improve its human rights record.

When news of the unfreezing of the aid was made public, members of the Egyptian delegation sent "victory texts" to Egyptian expatriates, gloating over the fact that the decision took place on the same day of the widely publicised Congress hearing, sources who saw the texts told MEE.

"The timing could not be worse," said Mohamed Soltan, an Egyptian-American citizen and human rights advocate, known for his 490 days of hunger strike in an Egyptian jail following the 2013 Rabaa massacre.

"It's very unfortunate that this happened on the same day of the hearing," he told MEE.

Moreover, releasing the aid while the military delegation was in Washington "sent all the wrong signals," he said.

The Egyptian government would interpret the Congress hearing as part of a coordinated policy by the US to pay lip service to human rights and democracy, even as it continued to conduct business as usual with Cairo, Soltan said.

"As an Egyptian American advocate on human rights issues, I am hopeful that Congress will play a bigger role in using its powers appropriately to hold the Egyptians accountable," he said.

Soltan works as the development director of the Freedom Initiative, a non-profit campaigning for the release of political prisoners in Egypt.

He believes that using aid to exert pressure on the Egyptian government was successful in compelling it to release four American political prisoners, including himself.

There are currently at least 17 Americans in Egyptian jails. Their fate will show whether Egypt will be emboldened by the US decision, Soltan said.

Aya Hijazi, an Egyptian American who spent three years in jail in Egypt, was flown to Washington on a US government plane in April 2017 after being acquitted in a trial which Human Rights Watch described as "a travesty of justice".

The charges brought against Hijazi were linked to her role as the founder of a civil society organisation, Belady, aimed at rehabilitating street children in Egypt.

Following her return to Washington, Hijazi was photographed in the Oval Office with Trump, who said it was a "great honour" to host her.

She said the US decision to release the aid was “an expected yet unfortunate step back for human rights".

"This gives the military a green light to continue the reign of suppression it is embarking on," she told MEE.

Egypt receives nearly $1.3bn in military aid annually from the US. In 2018, this represented 21 percent of all US foreign military financing, making Egypt the second-largest recipient of American military aid after Israel.

Over the past 40 years, since the signing of the US-brokered peace treaty with Israel in 1979, the US has given Egypt approximately $47bn in military assistance and $24bn in economic aid, according to the Congressional Research Service.

Wednesday's decision, however, was not a precedent in US-Egyptian relations. The Obama administration froze military aid to Egypt following the 2013 military coup, led by then-minister of defence Sisi, who is now president.

Obama then lifted the ban in 2015 citing the need to support Egypt in its fight against the Islamic State group.

On 22 August 2017, former US secretary of state Rex Tillerson informed Egypt of Washington's decision to withhold $95.7m in military and economic aid, and to hold $195m in additional military aid pending Egypt's progress in human rights.

As Kushner was arriving in Cairo, the Egyptian foreign ministry issued a statement warning of "negative implications," condemning the "poor judgement" of the US administration, and accusing it of lacking "an accurate understanding of the importance of supporting Egypt’s stability".

A meeting between Kushner and Sameh Shokry, Egypt's foreign minister, was adjourned following the statement. But the two met later after Kushner's meeting with Sisi.

At that time, the administration did not publicly disclose the reasons for withholding the aid. But it later became known to the policy community in Washington that the US administration established three conditions for resuming the aid: a change in Egypt's friendly relations with North Korea, including a history of arms trading dating back to the 70s; a resolution of the NGO trial crisis; and a significant change in a draconian NGO law passed under Sisi.

There are no indications that Egypt has fully met any of the three conditions. The North Korean embassy continues to operate in Cairo, the NGO law is still in place, and at least 16 Americans continue to face trial in Egypt – most of them in absentia - over their involvement with American NGOs in Egypt.

"Unfortunately the US has given away its leverage in this relationship by releasing the aid before the conditions on which it was held were met," Michele Dunne, senior associate at the Washington-based Carnegie Endowment for International Peace, told MEE.

"It really shows a lack of resolve and seriousness on the part of the US government. In that sense the message to the Egyptians is that they really do not need to listen to what the US says."

On 29 May 2017, Sisi ratified a controversial NGO law that, according to Amnesty International, could amount to "a death sentence for human rights groups in the country".

The law gave Egyptian NGO workers a one-year ultimatum to comply with its provisions, such as obtaining government permission to conduct field research and suspending any activities that "harm national unity" and "disturb public order." or face up to five years in prison.

At least 180 NGO workers have been prosecuted in Egypt since Sisi became president in 2014.

Sisi ratified the law after two months of his meeting with Trump at the Oval Office.

"I just want to let everybody know, in case there was any doubt, that we are very much behind President el-Sisi," Trump said following his meeting with Sisi in April 2017.

"He's done a fantastic job in a very difficult situation. We are very much behind Egypt and the people of Egypt. The United States has, believe me, backing, and we have strong backing." Arms Trade
US unfreezes $195m in military aid to Egypt 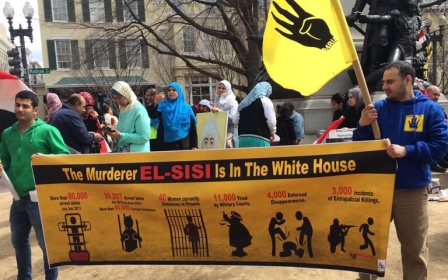