US offers up to $10m for information on Hezbollah's finances US officials said they are specifically looking for information on Mohammad Bazzi, Adham Tabaja and Ali Charara (MEE/Ali Harb)
By
Ali Harb
in
Washington

Washington wants to "hit Hezbollah in the wallet," US officials have said, as the State Department announced it was offering up to $10m for information that would lead to the "disruption" of the group's financial networks.

The Lebanese movement's financing leaves a "transnational papertrail that implicates scores of individuals and companies," Marshall Billingslea, a Treasury Department official, told reporters at a news briefing on Monday.

Through its "Rewards for Justice" programme, the State Department is offering to pay people who would provide documents on Hezbollah's economic activities.

"The United States government seeks any and all information that helps us uncover these financial activities, and which leads us to financial disruption," Billingslea said.

"This includes specifically information on corporation and shareholder documents.

"We will pay for bank records, customs forms, real estate transactions and anything evidencing money laundering or cash smuggling."

Monday's announcement comes hours after Secretary of State Mike Pompeo said Washington will no longer be issuing exemptions from US sanctions for countries importing oil from Iran.

While addressing Hezbollah financing, US officials framed the crackdown on the Tehran-based group within the broader anti-Iran efforts.

"The point of today's announcement is clear," said Nathan Sales, US envoy and coordinator for counterterrorism.

"We will continue to increase the financial pressure and impose costs on the Iranian regime and its terrorist proxies, until they abandon their malign and outlaw behaviour."

The officials said Hezbollah receives $1bn in revenues from Iran annually, but they cited the group's leader Hassan Nasrallah as saying that the organisation is hurting financially, crediting sanctions for the economic trouble of the group.

Indeed, last month Nasrallah solicited donations from the group's supporters and lamented the growing financial pressure on Hezbollah as the UK and several Gulf countries blacklisted the Lebanese movement as a "terrorist" organisation.

Despite the intensifying international campaign against Hezbollah, which portrays itself as a protector of Lebanon from Israel and hardline militants, remains a major actor in Lebanese politics.

Both the country's president, Michel Aoun, and Speaker of Parliament Nabih Berri are close partners of Hezbollah.

The party also emerged victorious in the parliamentary elections last year, maintaining the overwhelming support it enjoys amongst its Shia base despite its involvement in the war in Syria, where its members are fighting alongside government troops. Amid reports of incoming sanctions against Berri and other Lebanese allies of the group, US officials said the efforts against Hezbollah's financial networks aim to target the group itself, not Lebanon's Shia community.

Asked by Middle East Eye if US efforts will target Hezbollah-linked individuals, including officials in the group's political wing, Sales said the bounty is focused on the "unified Hezbollah organisation including all subsidiaries".

However, he said there is no such thing as a political wing of Hezbollah.

"Hassan Nasrallah rejects this false, convenient distinction between a political wing and a military wing." 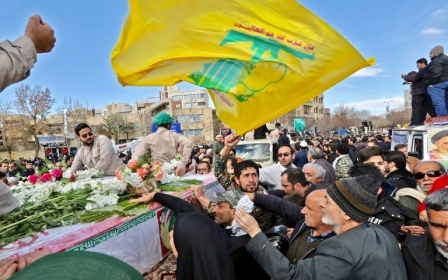 Inside Lebanon
Germany will not classify Hezbollah as terrorist group: Report