US Secretary of State Mike Pompeo set to visit Sudan US Secretary of State Mike Pompeo is also planning to visit Israel, Bahrain and the United Arab Emirates on the trip (AFP)
By
MEE and agencies

US Secretary of State Mike Pompeo is set to visit Sudan in the coming days, Sudanese and US officials announced on Sunday.

Sudan has been normalising relations with the United States since the overthrow of former leader Omar al-Bashir in April 2019, but is still seeking to be removed from a list of countries the US considers as state sponsors of terrorism.

Pompeo arrived in Israel on Monday and will also visit Bahrain and the UAE as part of a five-day tour. His trip follows an accord between Israel and the UAE earlier this month to normalise relations and will focus on pushing other Arab states to follow suit.

Speaking late on Sunday, Israeli Prime Minister Benjamin Netanyahu said he and "his friend" Pompeo would talk about "expanding the circle of peace in our region" during their Monday meeting.

"We're working on peace with more countries, and I think there will be more countries - and in the not-so-distant future," Netanyahu said.

Following the US-sponsored deal announced on 13 August, the new partners say they want to promote trade, especially the sale of Emirati oil to Israel and Israeli technology to the Emirates, as well as boosting tourism by establishing direct air links.

In Sudan, Pompeo will meet Prime Minister Abdalla Hamdok and the head of the country's ruling council, General Abdel Fattah al-Burhan, "to discuss continued US support for the civilian-led transitional government and express support for deepening the Sudan-Israel relationship", the US State Department said. A Sudanese official, who spoke on condition of anonymity, declined to give details of Pompeo's visit.

Ending the terrorism listing is a top priority for Sudan's transitional military-civilian ruling council and the government of technocrats that serves under it.

In a television address on Saturday, Hamdok had said that Sudan had come a long way towards being removed from the United States' list of state sponsors of terrorism.

There have been intense communications with the US administration about getting Sudan removed from the list and significant progress was expected in the coming weeks, a senior government source added.

Washington added Sudan to the list in 1993, over allegations that Bashir's Islamist government was supporting terrorist groups.

The designation makes Sudan, struggling with a deep economic crisis, technically ineligible for debt relief and financing from the International Monetary Fund and World Bank. Sudan's removal from the list would ultimately need the approval of US Congress.

Sudan announced on 19 August that it had sacked its foreign ministry spokesman after he had called the UAE's decision to become the third Arab country to normalise relations with Israel "a brave and bold step".

As part of Saturday's televised address, Hamdok had also said that Sudan was ready to cooperate with the International Criminal Court (ICC), so that those accused of war crimes in Darfur could appear before the tribunal - a list that includes Bashir.

Bashir, currently on trial in Khartoum over the 1989 military coup that propelled him to power, is wanted by the ICC for alleged war crimes, genocide and crimes against humanity during the conflict in Darfur, the region in western Sudan where an estimated 300,000 people were killed from 2003 onwards. 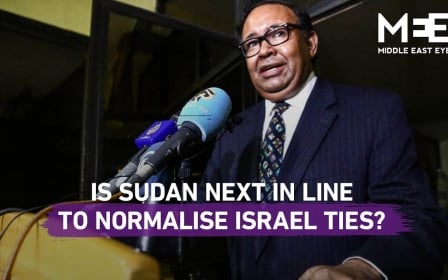