With Shia parties pressuring American troops to leave, Washington wants to create an autonomous region around Anbar to maintain its presence 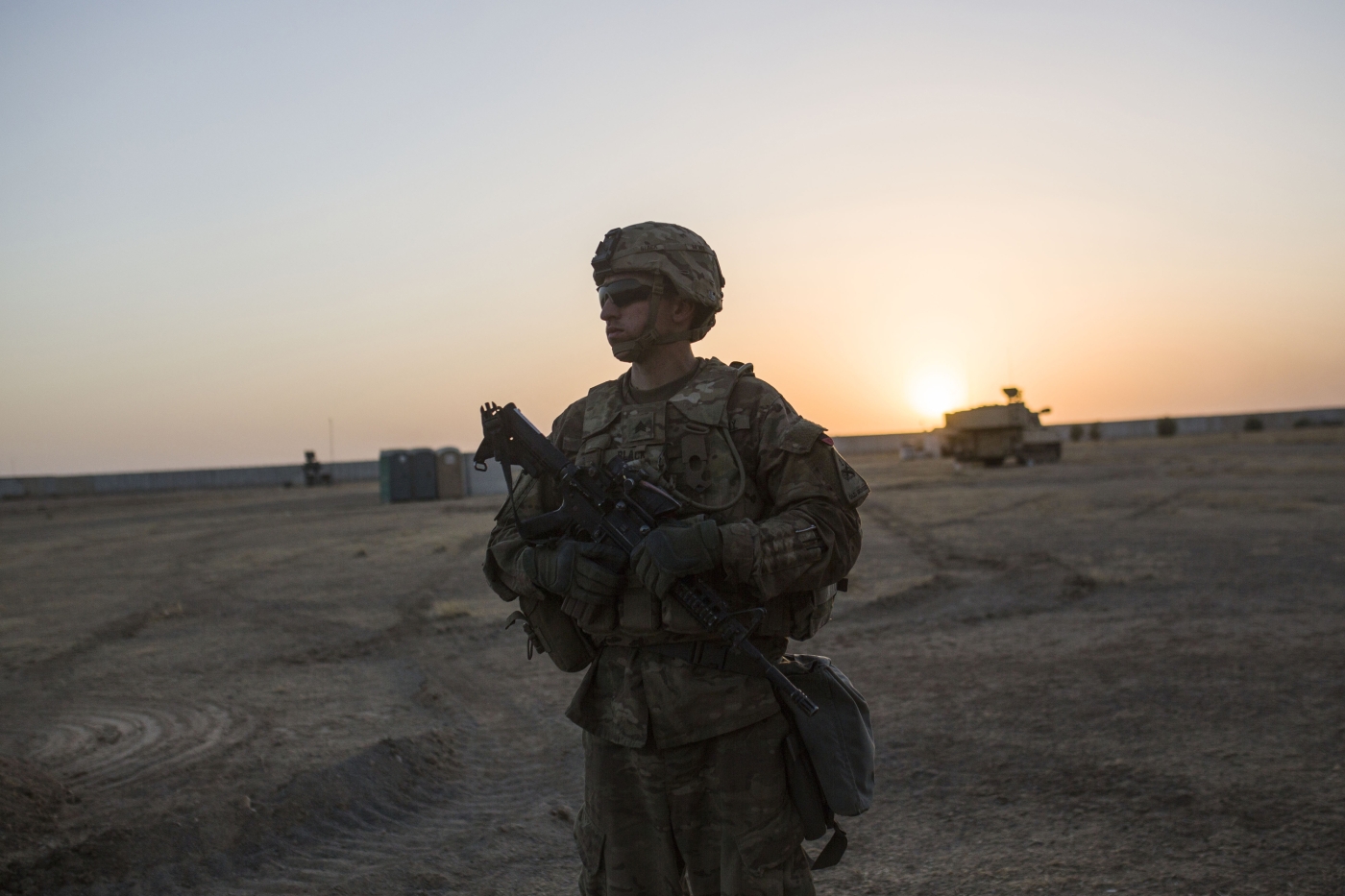 A US soldier standing at northern Iraq's Qayyarah military base in 2016. Shia Iraqi parties are vying to expel US troops from their country (AFP)
By
Suadad al-Salhy
in
Baghdad

Backed into a corner and influence waning, the United States has in recent weeks been promoting a plan to create an autonomous Sunni region in western Iraq, officials from both countries told Middle East Eye.

The US efforts, the officials say, come in response to Shia Iraqi parties’ attempts to expel American troops from their country.

Iraq represents a strategic land bridge between Iran and its allies in Syria, Lebanon and Palestine.

Establishing a US-controlled Sunni buffer zone in western Iraq would deprive Iran of using land routes into Syria and prevent it from reaching the eastern shores of the Mediterranean.

For Washington, the idea of carving out a Sunni region dates back to a 2007 proposition by Joe Biden, who is now vying to be the Democratic Party’s presidential candidate.

'The creation of a Sunni region has always been an option for the US. The Iranians cannot be allowed to reach the Mediterranean Sea or benefit from the land bridge connecting them to Hezbollah'

It was hoped that the scheme could tighten US control over Iraq and provide protection for Sunnis during the 2006-08 sectarian civil conflict, in which tens of thousands of innocent Iraqis from both the Sunni and Shia communities were slaughtered.

But opposition to Iraq being divided along sectarian and ethnic lines, as well as Americans’ insistence on keeping the country united, has postponed attempts at its implementation.

Now efforts to expel US troops have breathed new life into the project, and the creation of a Sunni region is just one of the options being considered by Washington to counter Iranian pressure, a top Iraqi Shia official, speaking on condition of anonymity, told MEE.

Iraqi unity “is no longer a priority now for the US,” the Shia official said.

“If the Americans reach a dead-end in terms of the presence of their forces in Iraq, they will work to implement this project vigorously.”

A former US official familiar with the project confirmed that the Americans have worked on "taking this project out of the drawer and putting it on the table".

“The creation of a Sunni region has always been an option for the US. The Iranians cannot be allowed to reach the Mediterranean Sea or benefit from the land bridge connecting them to Hezbollah” in Lebanon, the former US official told MEE.

"The project is American, not Sunni. The presence of the American forces has been the guarantor for the Sunnis and the Kurds, so if the US has to leave Iraq, then establishing a Sunni region in western Iraq is its plan to curb Iran and its arms in the Middle East,” he added.

“We are talking about establishing a country, not an administrative region.”

Since the 2003 US invasion, Iraq has been one of the largest arenas of conflict between Washington and Tehran.

But tension between the two enemies climaxed on 3 January, when a US drone strike in Baghdad killed top Iranian general Qassem Soleimani and Abu Mahdi al-Muhandis, deputy head of Iraq’s Hashd al-Shaabi paramilitary.

The assassination of Soleimani, who was in charge of Iranian field operations in the Middle East, and Muhandis, who established most of his country’s Shia armed factions and acted as a kind of “spiritual father” to the fighters, sent shockwaves through Iraq.

It forced Iraqi Shia politicians and a number of their allies to respond to pressure from the armed factions by heading to parliament and voting to end the 17-year US military presence in the country.

Though it was non-binding, the 5 January vote to expel foreign forces sent a powerful message.

The absence of Sunni and Kurdish MPs in parliament highlighted the fragile relationship between Sunni leaders and their Iran-backed Shia allies. Most abstaining MPs left Baghdad toward either Erbil in northern Iraq or Jordan’s Amman for fear of retaliation.

The latest developments in Iraq have prompted them to search for other options, foremost among which was an autonomous Sunni region, Sunni lawmakers told MEE.

As soon as some Sunni politicians arrived in Erbil and Amman, they met US officials there to "discuss options for both sides,” sources said.

In the early hours of 8 January, Iran targeted two Iraqi military bases hosting US forces, one in western Iraq and the other in the north, with ballistic missiles that left no casualties.

Less than 24 hours later, US Assistant Secretary of State for Near Eastern Affairs David Schenker flew to Erbil, without going through Baghdad, to meet key US ally and former president of the Kurdistan Regional Government, Masoud Barzani, in addition to a number of other Kurdish officials.

Although statements later issued by the US did not mention any meetings that took place with Sunni leaders in Erbil, many sources confirmed that both the assistant secretary of state and Stephen Fagin, the US consul in Erbil, met a number of Sunni politicians “to discuss the implications of the parliament’s decision, the threats that Sunnis face and options for facing the two issues”.

On the same day, Schenker flew to the UAE. There, he later said, he met "by chance" with the speaker of the Iraqi parliament, Muhammad al-Halbousi, “who happened to be there”.

After meeting with Schenker, Halbousi held a series of meetings in the UAE on 9 and 10 January with several prominent Sunni leaders.

“The idea of establishing a Sunni region came as a reaction to Shia forces’ attempts to make crucial decisions without the approval of Sunnis,” a lawmaker who participated in the UAE meetings told MEE on condition of anonymity.

"Claims for our own region do not come on a sectarian basis, but on an administrative basis to develop our provinces,” the lawmaker said.

“The attendees agreed on the idea and said that they will present it to our audience at an appropriate time.”

Halbousi, who is currently the strongest Sunni ally of the Iranian-backed al-Binnaa parliamentary alliance, and who secured his office thanks to this support, has denied that such a plan was even discussed, let alone agreed upon.

However, a number of leaders in Halbousi’s coalition have said they are subject to pressure from political partners keen to pursue the plan, and are presented with various temptations.

“The talks on this topic are uninterrupted and increase in frequency over time,” Abdullah al-Khirbeit, a prominent Sunni lawmaker and a close ally of Halbousi, told MEE.

“When we say we want decentralisation in Iraq, this can be discussed. But federalism and confederation is not acceptable to us because it means dividing Iraq.”

None of the Sunni and Shia leaders and officials spoken to by MEE have any clear idea of the project’s details.

They all say that it is still just ideas and no clear information has been provided regarding the region’s prospective borders, the number of provinces it would contain and mechanisms to solve the problems that it will face.

It is perfectly clear, however, that the project will be launched from Anbar province, to later include the provinces of Nineveh and Salah al-Din, and part of Diyala. 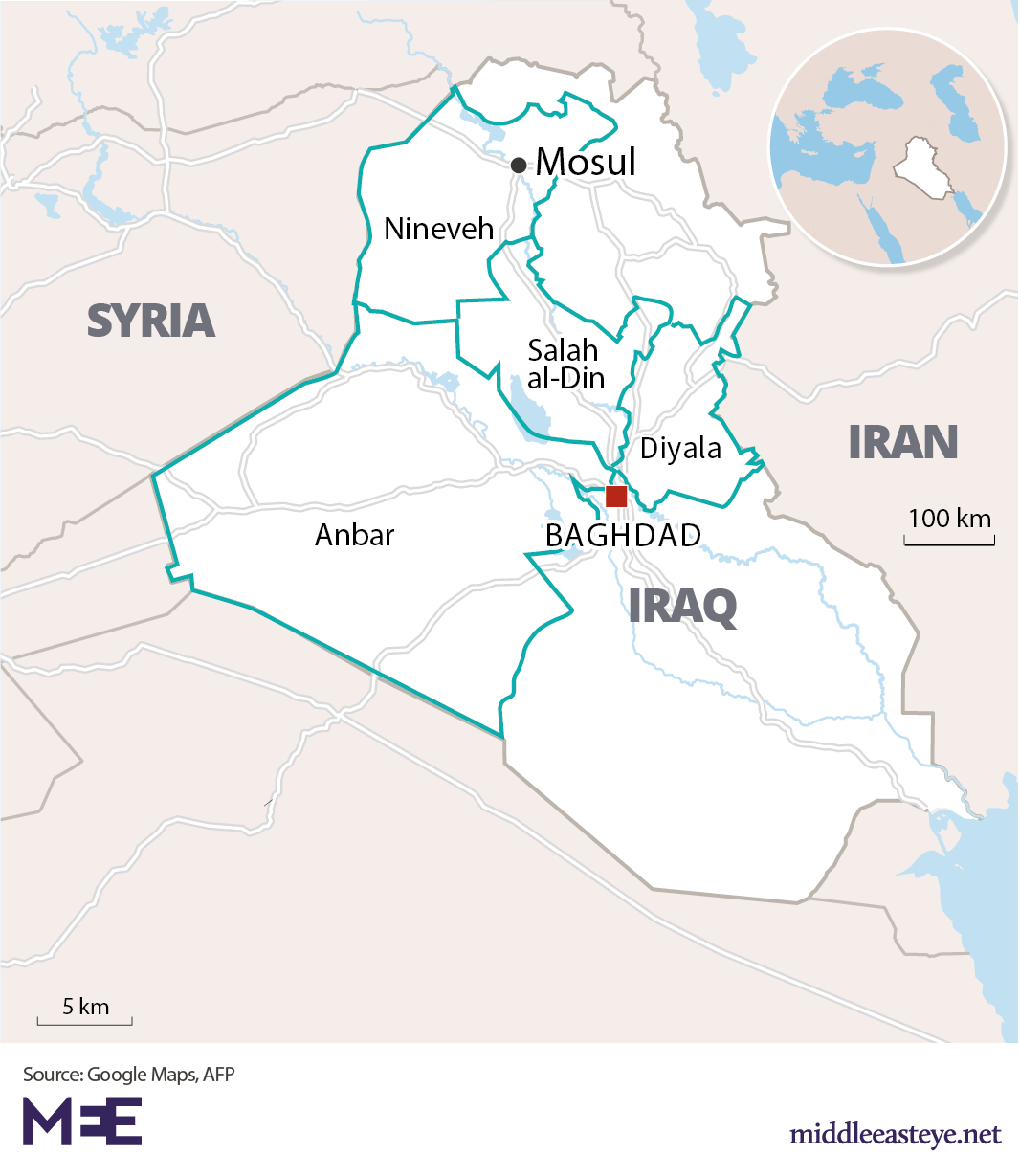 The proposed Sunni region will be created first in accordance with the articles of the Iraqi constitution, which allows for administrative regions to be established alongside Kurdistan.

Later, the region will be temporarily annexed to Kurdistan in a federal or confederal form, "to avoid the conflict between Sunnis and Kurds over Kirkuk and the disputed areas", according to a prominent Sunni leader.

The last step, MEE understands, will be to have this region recognised internationally.

The Arab Gulf states allied to US, led by Saudi Arabia and the United Arab Emirates, support and finance this project, Sunni and Shia leaders and officials told MEE.

“Funding is in place, international pressure is in place, and the necessary military strength is in place to create this region,” a prominent Sunni leader familiar with the talks said.

“Neither Iran nor the Shia forces will be able to stand against the project because the US and Gulf states back it,” the leader added.

“A huge amount of money and investment offered by the Sunni states is at stake, and these will turn the Anbar desert into green oases and rebuild the destroyed areas in Mosul and Salah al-Din. Who will care about oil?”

All eyes on the protests

Since 1 October, Baghdad and nine predominantly Shia provinces have been rocked by anti-government demonstrations, which have demanded an end to corruption, the government’s downfall and early elections based on a new electoral law that will limit Iran’s influence.

Iraqi security forces and some Iran-backed armed groups have led a bloody crackdown on demonstrators, activists and journalists in response, killing some 500 people.

The Sunni-dominated governorates have not participated in the demonstrations, however, fearing it could be used by Shia factions to justify violent repression. And while the majority of Sunni politicians have remained silent over the protests, in general Sunnis have shown sympathy for the Shia protesters’ cause.

Leaders familiar with the ongoing talks on partitioning Iraq said that Sunni politicians are seriously involved in the discussions and are waiting to see the demonstrations’ outcome before deciding on their path.

"The meetings are taking place in full swing, and all the Sunni leaders are attending. But they deny this publicly, waiting for the conditions that protect them,” a prominent Sunni leader familiar with the talks told MEE.

If the protesters are able to force through a national government that takes care of all Iraqi communities, then the Sunnis will reject any planned autonomous area, the leader said.

Failure to achieve this, he warned, would see Sunnis supporting the partition project en masse.

"Sunnis do not want to be part of the Shia crescent, and refuse to submit to Iranian control. So they will offer the Americans permission to build military bases in their lands, in exchange for the necessary support to establish the desired region.” 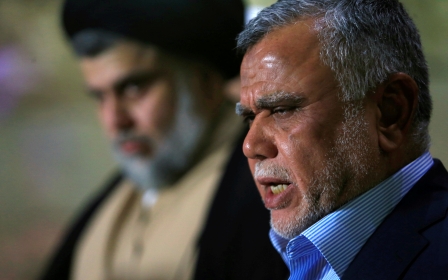 Iran tensions
Killing Soleimani made US 'weaker' in Middle East, US senator says