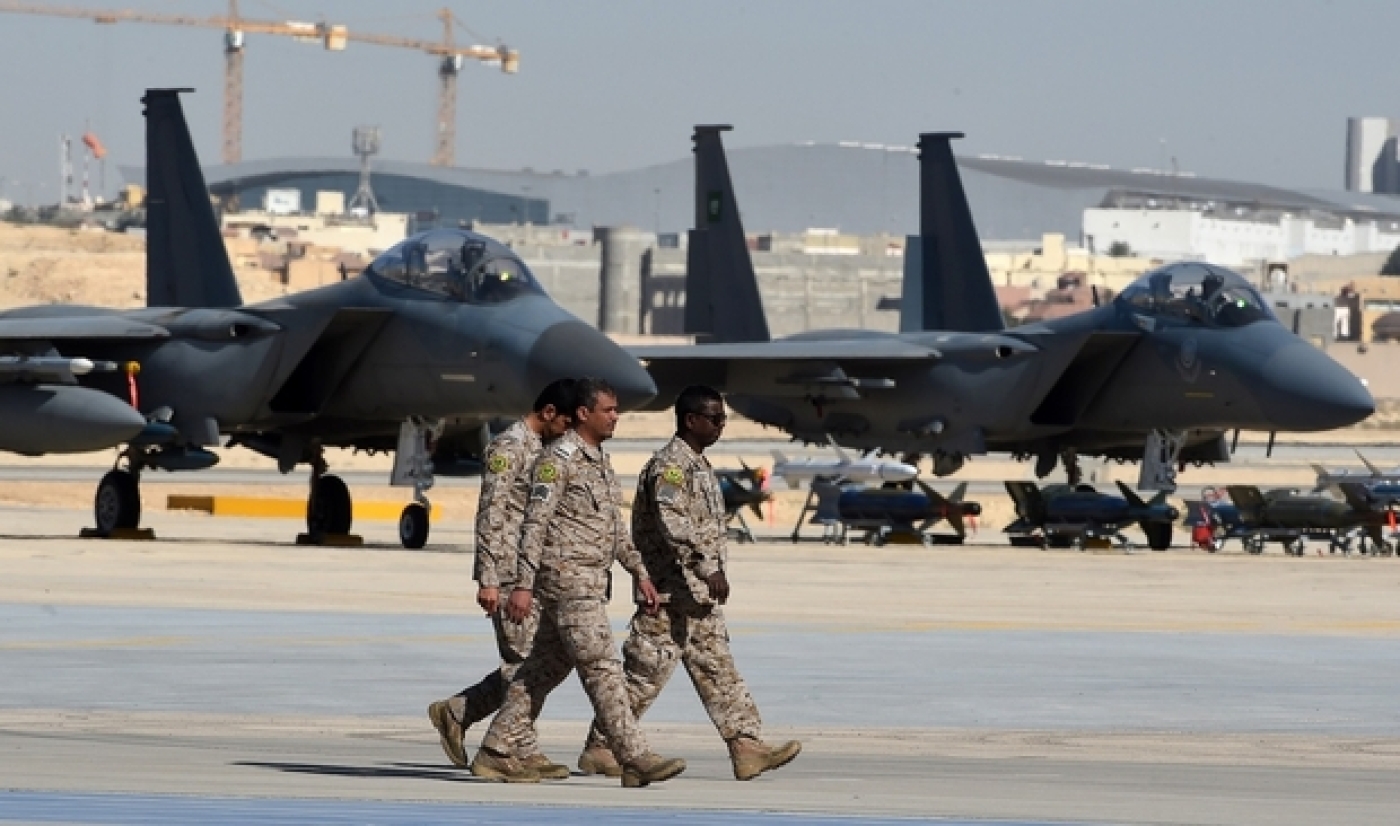 A US Senate vote to move forward with a resolution to end Washington's support for Saudi-led forces in Yemen marked an historic first for the legislative chamber earlier this week.

Still, the vote may not lead to any concrete steps to address the humanitarian catastrophe in the country, nor does it necessarily signal a genuine and long-lasting US policy shift, analysts told Middle East Eye.

"I don't think we're at the point that we can say that this administration's policy toward the war in Yemen has changed in any appreciable way," said John Willis, a professor at the University of Colorado Boulder and an expert on Yemen.

In Trump rebuke, US Senate votes to move ahead with Yemen resolution
Read More »

The Senate decision on Wednesday was the furthest US politicians have gone to try to curtail American involvement in the Yemen war after past failed attempts.

The vote was widely described as a symbolic first step, demonstrating growing discontent among lawmakers for US President Donald Trump's unwavering support for Saudi Arabia.

"We shouldn't expect too much from [the] vote, although it is a testament to the great work of a number of activist organisations that have put pressure on the Senate to condemn the war over the past three years," Willis said.

The 63-37 vote only moved the Yemen resolution out of the Senate Committee on Foreign Relations, and the motion faces a long road before it can become law.

First, the resolution must be debated in the Senate, which means its content may change. If it passes there, it would be sent to the House of Representatives, where it may face even more amendments before being voted on.

If it passes a vote in the House, the White House must then sign the measure into law - a lofty challenge, as Trump has vowed to veto the bill. If he does, the bill would go back to the Senate, where it would need the support of two-thirds of US senators to successfully override the veto.

Still, frustration among some US lawmakers about the US position since the murder of Saudi journalist Jamal Khashoggi at the Saudi consulate in Istanbul in early October may have tipped some of the Senate votes this week.

We shouldn't expect too much from [the] vote, although it is a testament to the great work of a number of activist organisations that have put pressure on the Senate to condemn the war over the past three years

Republican Senator Lindsey Graham, for instance, said he switched his vote on Wednesday after he grew incensed over the exclusion of CIA director Gina Haspel from a briefing to lawmakers on Saudi Arabia.

The briefing was delivered instead by US Secretary of State Mike Pompeo and US Secretary of Defense Jim Mattis a few hours before the Senate vote, while Haspel, who has heard an audio recording of Khashoggi's murder, was not present to answer questions surrounding what happened to the journalist.

"The way the administration had handled the Saudi Arabia event is just not acceptable. The briefing [on Wednesday] did not help me at all better understand the role that [Saudi Crown Prince Mohammed bin Salman] played in the killing of Mr Khashoggi."

That said, the fact that the Senate got the resolution out of committee marks an achievement, as previous legislative attempts have failed.

Most recently, the same Senate resolution on Yemen failed to pass in a 55-44 vote in March.

"Wednesday's vote sends a welcome, important, and long overdue message that it's time for the US to end its participation in the conflict and that the upper house of Congress is willing to assert itself in matters of war and peace," wrote Steve Pomper, the US programme director for the International Crisis Group, and Tess Bridgeman, a senior fellow at the Reiss Center on Law and Security at NYU School of Law.

Wednesday's vote sends a welcome, important, and long overdue message that it's time for the US to end its participation in the conflict

"As a legal matter, it is highly unlikely to compel the Trump administration to stop its involvement in the war in Yemen, absent changes. But this needn't detract from the strong political signal that Congress is sending both to the administration and to the Saudi-led coalition with this legislation," they wrote for the website Just Security.

The motion seeks for the first time to take advantage of a provision in the 1973 War Powers Act that allows any senator to introduce a resolution on whether to withdraw US armed forces from a conflict not authorised by Congress. If eventually passed, it demands within 30 days an end to all US involvement in the Yemen war, which has not been authorised by Congress.

Saudi Arabia launched the military campaign in Yemen in 2015 to root out the country's Houthi rebels, who had taken over the capital, Sanaa, and ousted the internationally recognised and Saudi-backed government of President Abd Rabbuh Mansour Hadi.

The US military has since provided intelligence sharing and training to the Saudi-led coalition fighting in Yemen, which includes the United Arab Emirates. The Pentagon had also been conducting air-to-air refuelling for coalition aircraft, but this month said that would stop.

Sheila Carapico, a Yemen expert at the University of Richmond, said the Senate vote "took a lot of people by surprise".

"It shows a shift [from] the last vote and there's suddenly quite a lot of attention to the war in Yemen," Carapico told MEE.

US 'leverage' to end conflict

While the war in Yemen has triggered what the United Nations calls the world's worst humanitarian crisis, fighting between the Houthi armed movement, aligned with Iran, and the US-backed military coalition, headed by Saudi Arabia, has persisted despite repeated international calls for a ceasefire.

The country's health services and water supplies have been severely damaged, more than two million people have been uprooted from their homes and about 14 million Yemenis are on the brink of famine as a result of the conflict, the UN said.

According to the UN, almost 10,000 people have been killed since the Saudi-led coalition joined the conflict in 2015. The figure may be much higher as an independent research group put the death toll as a result of direct fighting at 56,000 since 2016.

Last Wednesday, Save the Children said as many as 85,000 children under five may have died as a result of starvation or disease in Yemen since 2015.

In this context, Willis said the US Senate resolution may create some leverage on the international level to bring the different warring parties to the negotiating table.

"As countries such as Germany, Spain [and] Finland ... block arms sales [to Saudi Arabia] and public pressure on the governments of Great Britain and France to do the same grows ever louder, the Senate vote may encourage the [Trump] administration to work to find a way to end the conflict," he said.

That was echoed by Peter Salisbury, a Yemen analyst and senior consulting fellow at Chatham House, who wrote on Twitter that the US Congress "now has significant leverage over the US government and Saudi led coalition".

Congress now has significant leverage over the US government and Saudi led coalition on #yemen. Should consider how to use it wisely, and remember that the US alone won’t end the war.

Priority should be preventing a fight for #Hodeidah port and city, allowing a UN takeover.

US lawmakers "should consider how to use it wisely," Salisbury wrote, saying the priority should be to prevent a fight for control of the critical Yemeni port city of Hodeidah.

Still, Willis cautioned that "an actual political resolution is still beyond the horizon," as numerous actors are engaged in the country's conflict.

Indeed, amid recent heightened fighting in Hodeidah, the UN and several Western countries have struggled to get Yemen's warring sides - and their backers - to the negotiating table to agree to an end to the conflict.

UN Secretary-General Antonio Guterres said this week that the international body is working to organise "meaningful" peace negotiations between the Houthis and Hadi's government in Sweden before the end of the year.

It is frequently the case that during such a [negotiation] process, fighting continues or even intensifies

US Defence Secretary Mattis said those negotiations would take place in "early December," while a Houthi leader said on Thursday that the rebels will be in Sweden on 3 December, hinting that the talks may happen as soon as next week.

The Houthis have said they would attend the negotiations if they receive guarantees the rebels will be able to leave and return to Yemen, while a Yemeni government delegation said it plans to arrive in Sweden shortly after the Houthis do.

Carapico said the negotiating process may prove difficult and the suffering in Yemen will continue so long as a long-term solution is not in place.

"Even if there were to be negotiations, that would be a very long, drawn-out process, and it is frequently the case that during such a process, fighting continues or even intensifies," she said.