US Department of Defence says Boeing will deliver more than 1,000 air-to-surface and anti-ship missiles to kingdom

Contracts come as positive for Boeing, airline manufacturer that has seen its revenue decline amid Covid-19 (AFP/File photo)
By
MEE staff
in
Washington

The United States has awarded Boeing contracts worth more than $2.6bn for the delivery of air-to-surface and anti-ship missiles to Saudi Arabia.

The US Department of Defence made the announcement on Thursday, saying Boeing would provide more than 1,000 missiles to the kingdom. The delivery of these missiles is expected to be completed by 2026.

The contracts come as Boeing, a premier manufacturer of commercial airlines, has seen its revenue decline amid a global decline in travel caused by the coronavirus. The company has also faced harsh criticism over its 737 MAX airplane, two of which crashed because of technical failures.

Boeing said in its own statement that the contracts it received would allow it to continue its SLAM ER production, which ended in 2008.

The announcement also comes after a push last year by Democratic politicians to end the US support for Saudi Arabia's war in Yemen.

Congress passed a resolution last year with bipartisan support that would have halted assistance to the Saudi-led coalition in Yemen. President Donald Trump, however, vetoed the bill, and the push failed with the Pentagon's 2020 budget reflecting its military support for the kingdom.

Al-Arabiya reported earlier this week that Saudi Arabia would begin deploying its own missile defence systems after the US had announced it would begin to withdraw their systems from the country. 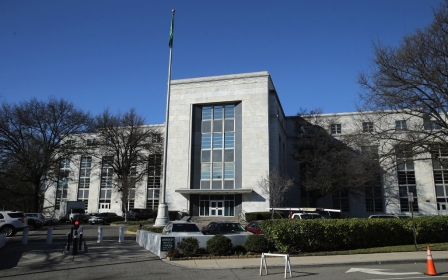