US to withdraw remaining troops from northern Syria

Meanwhile, Turkish officials announced on Sunday their troops had seized the crucial border towns of Ras al-Ain and Tal Abyad The United States is poised to evacuate about 1,000 US troops from northern Syria amid an ongoing Turkish offensive in the region, Defence Secretary Mark Esper said in a TV interview on Sunday, calling the situation "untenable" for US forces.

The withdrawal of US troops from the region comes after US President Donald Trump abruptly shifted policy and withdrew US troops deployed to support Kurdish forces in the fight against Islamic State (IS).

That decision in turn helped to open the door for Turkey to launch an offensive against the Syrian Democratic Forces (SDF).

The SDF coalition was formed with US assistance in 2015 with Arab, Turkmen and other ethnic groups in northern Syria. The group has been a key fighter against IS and an ally of Kurdish forces in the current war.

"In the last 24 hours, we learned that [the Turks] likely intend to extend their attack further south than originally planned, and to the west," Esper said in a pre-taped interview with "Face the Nation" on CBS.

"We also have learned in the last 24 hours that the ... SDF are looking to cut a deal, if you will, with the Syrians and the Russians to counterattack against the Turks in the north."

Esper said he spoke with Trump on Saturday night, and that the president directed the US military to "begin a deliberate withdrawal of forces from northern Syria".

Meanwhile, a small number of US troops have left an outpost in the town of Ain Issa in northern Syria because of concerns about a Turkish incursion that is pushing into Syria, two US defence officials told Reuters news agency on Sunday.

The officials, speaking on condition of anonymity, said the troops had moved because of concerns they could be caught in the middle of the Turkish offensive.

Turkey's offensive has raised alarm bells around the world amid concerns about its impact on civilians and the possibility of IS militants escaping from Kurdish-led authorities.

Speaking on Fox News channel, Esper said the US knew ahead of time about Erdogan's intentions to cross the border into Syria.

"It was clear to me that President Erdogan was committed to coming in. He informed us that he was coming in. He didn't ask permission."

He added that the US simply did not have enough troops to stop a Turkish advance and they needed to be taken out of harm's way.

"There is no way they could stop 15,000 Turks from proceeding south," he said.

The move, which was preceded by Trump's withdrawal of US troops from the area, has provoked outrage from some observers who fear a massacre will be carried out against Kurds in northern Syria.

The Turkish and Kurdish sides have issued contradictory statements about captured territory since Saturday.

On Sunday, Erdogan said that Turkey's military and its Syrian rebel allies have advanced 30-35 km into Syrian territory in their offensive against Kurdish-led militia and have already seized control of the town Ras al-Ain, a focal point of the incursion.

Speaking at a news conference in Istanbul, Erdogan said the Turkish-led forces had also besieged the Syrian border town of Tal Abyad, another focal point for the operation. He said two Turkish soldiers and 16 Turkey-backed Syrian rebels had been killed in the operation.

"We focused first on the 120km area between Ras al-Ain and Tal Abyad. Thus we will divide the 480km terrorist corridor down the middle," Erdogan said.

"Then we will take control of Hasakah on the one side and Ain al-Arab (Kobane) on the other and complete the operation," he said, referring to towns either side of the current focus of operations.

Erdogan added that Turkish-led forces had killed 440 fighters from the Kurdish-led SDF, in which the YPG comprises the main fighting element.

A Reuters witness said the Turkish army and its allies advanced into the centre of Tal Abyad on Sunday where the situation was calm and they were conducting search operations.

The Britain-based Syrian Observatory for Human Rights also said Turkey and its allies were almost in complete control of the town. 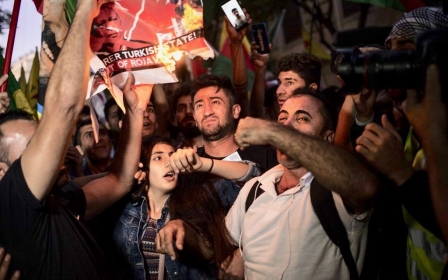