Footage appears to show Mohammed Shakiel Shabir, who disappeared in November, chained up in a cell as rescuers break down the door 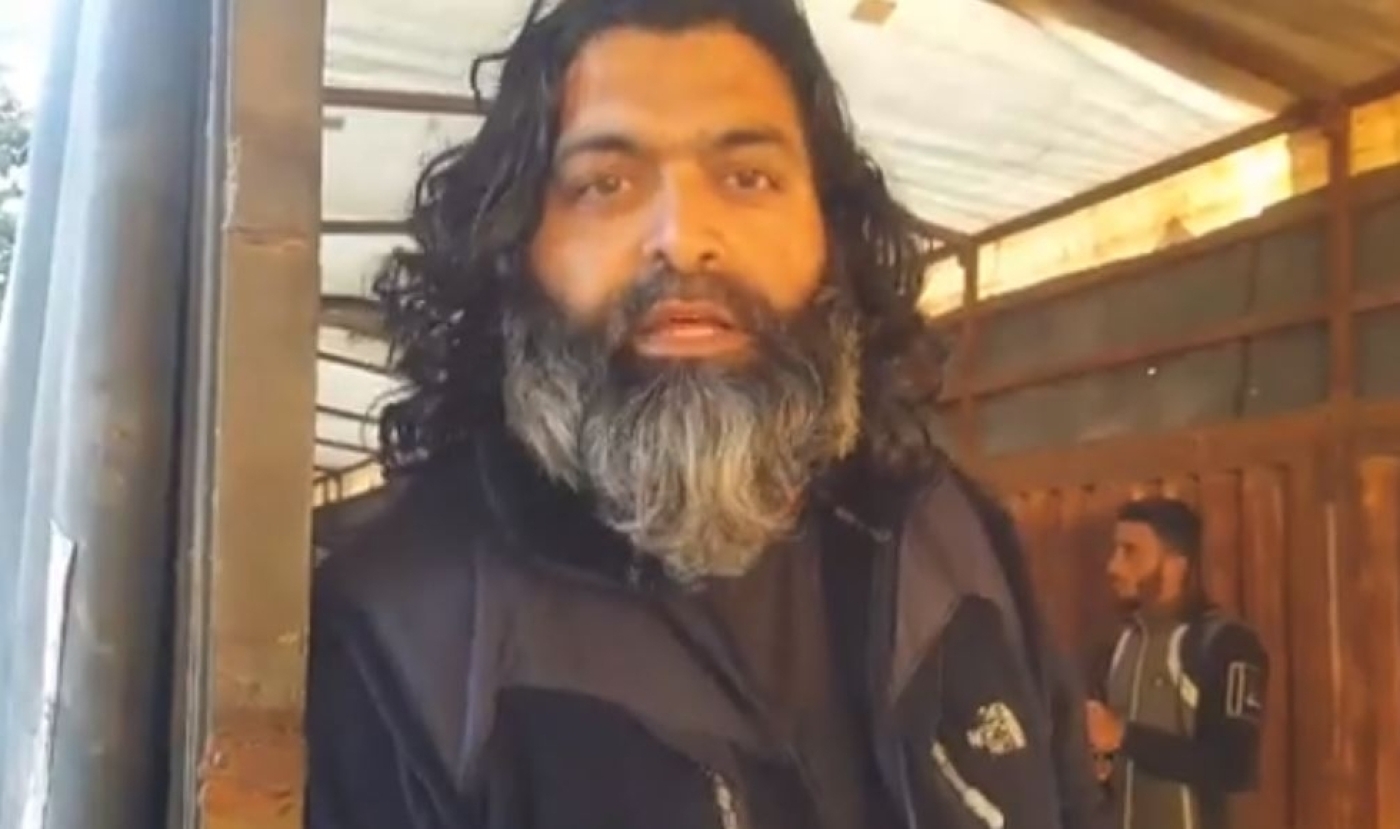 Mohammed Shakiel Shabir had been missing in Idlib since the end of November (Facebook/Screengrab)
By
Simon Hooper
, Zouhir Al Shimale

Footage has emerged showing the apparent rescue of a British aid worker missing in northern Syria since November.

Mohammed Shakiel Shabir, who is originally from Birmingham but has been based in opposition-held Idlib for the past four years, is believed to have been kidnapped and held hostage by an armed gang.

The video, which was originally posted by the media arm of the Hay’at Tahrir al-Sham (HTS) militant group, shows Shakiel being rescued by men in military uniform who break down the door of a cell where he is shackled to the wall by chains around his arms, legs and neck.

“Shakiel! Do you recognise me?” one man asks, leaning down to embrace him.

“I do my brother,” he replies.

A masked militant addresses the camera during the video and says: "We will get rid of these kidnapping gangs and the regime forces."

Middle East Eye could not independently verify the video which carries the logo of HTS's Ebaa News Agency.

But several people familiar with the case confirmed to Middle East Eye that he had been rescued.

Moazzam Begg, the outreach director for Cage, who is in touch with Shakiel’s family, said he had been rescued by members of HTS, the militant group that controls much of Idlib province.

Begg told Middle East Eye that Shakiel had been kidnapped by bandits who had demanded $4m for his release.

He said Shakiel was being debriefed by his rescuers who were trying to find out more details about who had abducted him.

They are investigating whether the kidnappers have any links to the Islamic State (IS) group or the Syrian government, he added.

A spokesperson for HTS told MEE that the operation had taken place in the Idlib countryside on Wednesday.

The kidnappers were an armed gang who abducted civilians for ransom, he said.

"Mohammed's health is good, and he’s doing well and being taken care of after being held in captivity for nearly two-and-a-half months,” he said.

An HTS security official, Obaida al-Saleh, told MEE that the group had been working to "tackle and eliminate abduction and assassination gangs" operating in Idlib.

"In the past few weeks we’ve caught dozens of these thugs, who’ve been scaring the residents and taking their money," he said.

A charity official in the UK, which had been informed about Shakiel's situation but did not want to be identified, said that members of the gang which had abducted him had been stopped at a checkpoint. Photos of Shakiel were discovered in the car, he said.

The group had also been involved in the abductions of Syrian nationals, he said.

Shakiel is a veteran aid worker who coordinates the distribution of aid in Idlib for numerous British and international charities.

Prior to working in Syria, Shakiel told MEE last year that he had worked on relief projects in Haiti, Pakistan, Lebanon, Myanmar and Bangladesh for IHH, a Turkish humanitarian organisation.

He also participated in aid convoys from the UK to Gaza, and was among the organisers of many convoys to Syria before he decided to base himself full-time in the opposition-held north of the country.

His most recent post on his Facebook account was dated 23 November 2018 and was a video update on a project to install heaters in accommodation in Idlib city for widows and orphaned children.

"More orphaned and widowed families receiving heaters and coal this winter," he wrote. "Many of these families have no means of heating and are living in poor conditions."

Idlib is the last opposition-held stronghold in Syria, but has been rocked in recent days by infighting in which HTS has seized control of much of the province from rebels aligned with the Turkish-backed National Liberation Front.

HTS, one of the main fighting groups in Idlib, is an alliance of militants that includes fighters who formerly belonged to the Nusra Front, al-Qaeda's affiliate in Syria. Nusra publicly broke away from al-Qaeda in 2016 and changed its name to Jabhat Fatah al-Sham.

It is considered a terrorist organisation in the UK. British charities have been discouraged from operating in Idlib by the country’s charities regulator, which warned last month that sending aid to Idlib could constitute a terrorism offence if it benefited HTS.

Shakiel is one of several British and western nationals involved in aid work who are still based in Idlib, but Begg said those still there had growing concerns for their security.

“There have been repeated kidnappings over the past couple of months. All of the guys have upped their security. Everybody is quite worried about this new state of banditry,” he said.

Some British nationals in Idlib say they are stranded in Syria and unable to return to the UK because they have been stripped of their citizenship.

Several were informed by the government in letters seen by MEE that they are assessed to have been involved in “Islamist extremist activities” and “present a risk to the national security of the United Kingdom”.