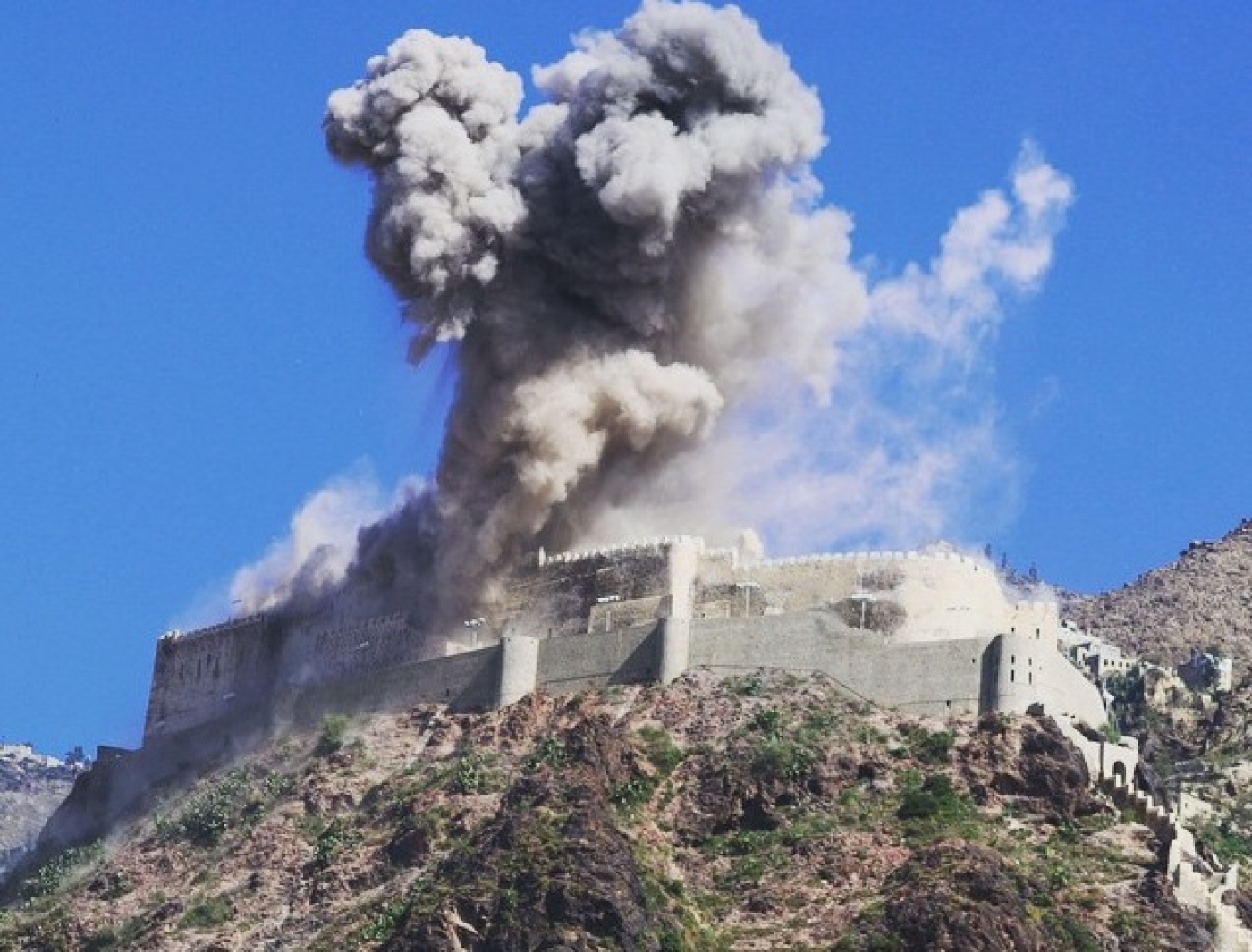 Qahira castle, which overlooks Taiz city, was recently captured by the Houthis and reportedly struck by the Saudi-led coalition (Twitter/@AmyFeldtmann)
By
Charlene Rodrigues

Sala Khaled and her friends used to climb up the 3,000-year-old Qahira fortress, overlooking Taiz city in south Yemen. The fortified stucco building is reminiscent of her childhood, where she learnt photography with her friends.

“Qahira castle is what made Taiz special and Taizis proud. I was afraid they would attack it and unfortunately, they did,” said Khaled.

Since Houthi fighters took over Yemen’s third largest city in March, Khaled said the city has been transformed into a ghost town.

The Saudi-led coalition began a bombing campaign to ward off the Houthis in March but since then the fighting has only grown more vicious.

Khaled now says these beautiful memories will never be the same again. “One day I will return but I will photograph the ruins. All the beauty has been reduced to dust,” she says from Sanaa, where she temporarily resides.

Like Khaled, many Yemenis feel powerless and trapped in the bitter power struggle between the Houthis and Saudi-led coalition of Arab states that is supported by the US, the UK and France.

Qahira castle is not the only site facing danger. The stained glass windows, popularly know as Qamariyah, of Sanaa’s Old City’s residential homes have splintered due to the impact of the unrelenting bombing on the nearby Nuqom mountains last week. The multi-storeyed houses there, built from gypsum (a sulphate used in many forms of plaster) and fired bricks, have been inhabited for more than 2,500 years.

The former minister of culture, Arwa Abdo Othman, says she holds the Houthis and forces loyal to former president Ali Abdullah Saleh, and the Saudi-led coalition forces accountable for the destruction of Yemeni heritage.

“There have been traces of the Houthi militia storing weapons in the historic castles, which caused the Saudi militia to bomb these sites,” she said. Despite warnings issued a month ago, Othman was disappointed that the heritage and archaeological sites were attacked.

Residents living in Old City, who asked not to be named, claim they saw weapons harboured outside the city, at the Ministry of Defence and inside schools.

For Anna Paolini, a UNESCO representative in the Arab States of the Gulf and Yemen, the situation for Yemeni heritage is similar to that of Iraq and Syria.

“I am hearing the same thing you are from people who are living [in Taiz],” Paolini said. “If you've been to Yemen, a lot of the archaeological sites are in the middle of nowhere. When you talk about archaeology, you talk about Balqis (believed to have been the home of the legendary Queen of Sheba) or Marib (the one time capital of the Sabean Kingdom). What do you want to store there? There is nothing there.”

“But this also happens with hospitals, schools. You cannot control this,” she added.

The Great Dam of Marib, dating back to the eighth century, is another casualty of Yemen’s conflict.

UNESCO has reported that the Sabaean inscriptions on the walls of the dam have been defaced. The attacks on the dam took place a week after the National Museum in Dhamar, a repository of more than 12,500 relics of Yemeni heritage, was obliterated earlier this month.

Civilians are torn with disbelief as they watch the country’s antiquities crumble. Cultural relics, including Bible manuscripts and statues dating to more than 600 years ago, are being sold for quick cash. Many are clueless whether systems are in place to locate and track the smugglers of these items.

Paolini said that the huge movement of refugees to Saudi Arabia and Djibouti could be another reason for goods traveling out of the country.

“There are significant challenges in trying to locate the culprits, and we are putting in place mechanisms to train the customs organisations of both countries and we are negotiating with them to prepare some surveillance techniques and courses,” she added.

Even before the war, Othman said collectibles and cultural artefacts had been stolen from Sanaa’s Traditional Heritage House. With only one percent of the government’s budget allocated for cultural projects, she said those officials under Saleh’s leadership acted like rogues. “Do you know that stockpiles of museum relics and manuscripts were pillaged systematically by the influential state and fled abroad in broad daylight?” Othman said.

Hisham al-Omeisy, a political analyst based in the capital, however, said the Saudi-led coalition was solely responsible for the destruction and had failed to achieve anything of benefit so far. “You don’t furiously swing a sledgehammer to kill a fly loitering on a Van Gogh painting. The destruction of a 3,000-year-old building to kill three or even 300 Houthis has enraged 30 million Yemenis, who have lost an irreplaceable and priceless part of their heritage," Omeisy said.

Khaled, goes as far as to argue that the Saudi-led coalition is destroying Yemen’s historic sites on purpose.

“They want to destroy what's left in this ancient land. Wish they could go somewhere outside Taiz or Yemen to finish up the fighting.”

Meanwhile, others questioned if this was the right time to focus on ancient sites, when more than 20 million people are facing a worsening humanitarian crisis and struggling to get access to food, water and medicine.

Abdo Elfgeeh, a businessman in the capital who witnessed the bombing campaign in the initial weeks, stressed that human lives should come first. He said sites should be targeted if they are used as weapon houses.

Two other sites that have come under attack in recent days are the 14th century Aidroos mosque and the Sirah fort, dating back to the 10th century, overlooking the city of Crater and the Indian Ocean. In the 16th century, the unassailable bastion weathered attacks by the Portuguese and played a vital role in defence against the Turkish army. The British later modified the original design and architecture of the fort, as stated in a report by Captain Foster, dated March 1839.

At the same time, Paolini said that the global site protection body is working with the Saudi-led coalition body to sensitise the military and make sure some of the major sites are out of the target zones. “We are also working with some internationally recognised archaeological sites. We are constantly in touch with different international organisations to advocate for the protection of these areas,” she said.

‘We are losing everything’

With major sites dating back as far as the sixth century BC, some Yemenis are fraught with worry that the country will be left culturally bankrupt by the ongoing war.

From 2007 onward, Othman said the country’s tourism has disappeared almost entirely, thanks to the rise of al-Qaeda attacks and kidnappings for ransom. “Unfortunately we have been outside the framework of the world for many years,” she said.

“The war has further exacerbated the country’s isolation and set the country back ten years."

But Elfgeeh said that it was “pathetic” to bring up the tourism issue now with violence raging and millions in desperate need.

“You know the situation of Yemen. It is a very very poor country without even a basic health and education system,” Paolini said. “The culture minister was committed, but for sure when the country’s major priority is linked to human lives, you go by priority.”

Khaled added: “I want peace and it hurts me to watch this destruction in my city. Civilians are being killed in the fighting. Nobody is winning this war. We are losing everything.”

But Othman said that there was also reason to stay optimistic. “As long as there are human beings, there will be innovation, there will be creativity, there will be a cultural heritage. As part of a civil society, it is up to us to raise our voices, to stop the war that kills the human spirit, kills us and kills our future.” 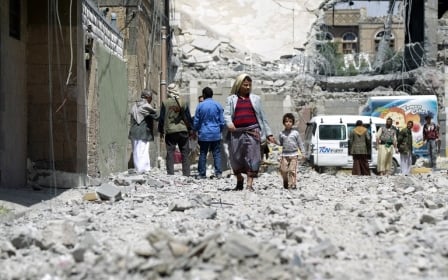 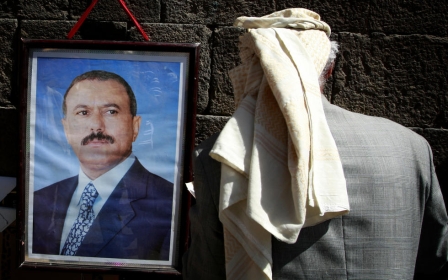 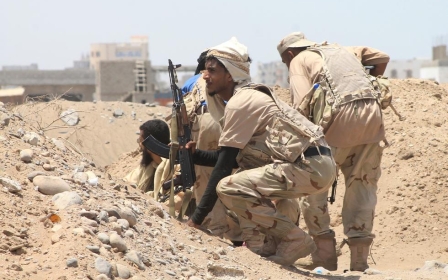