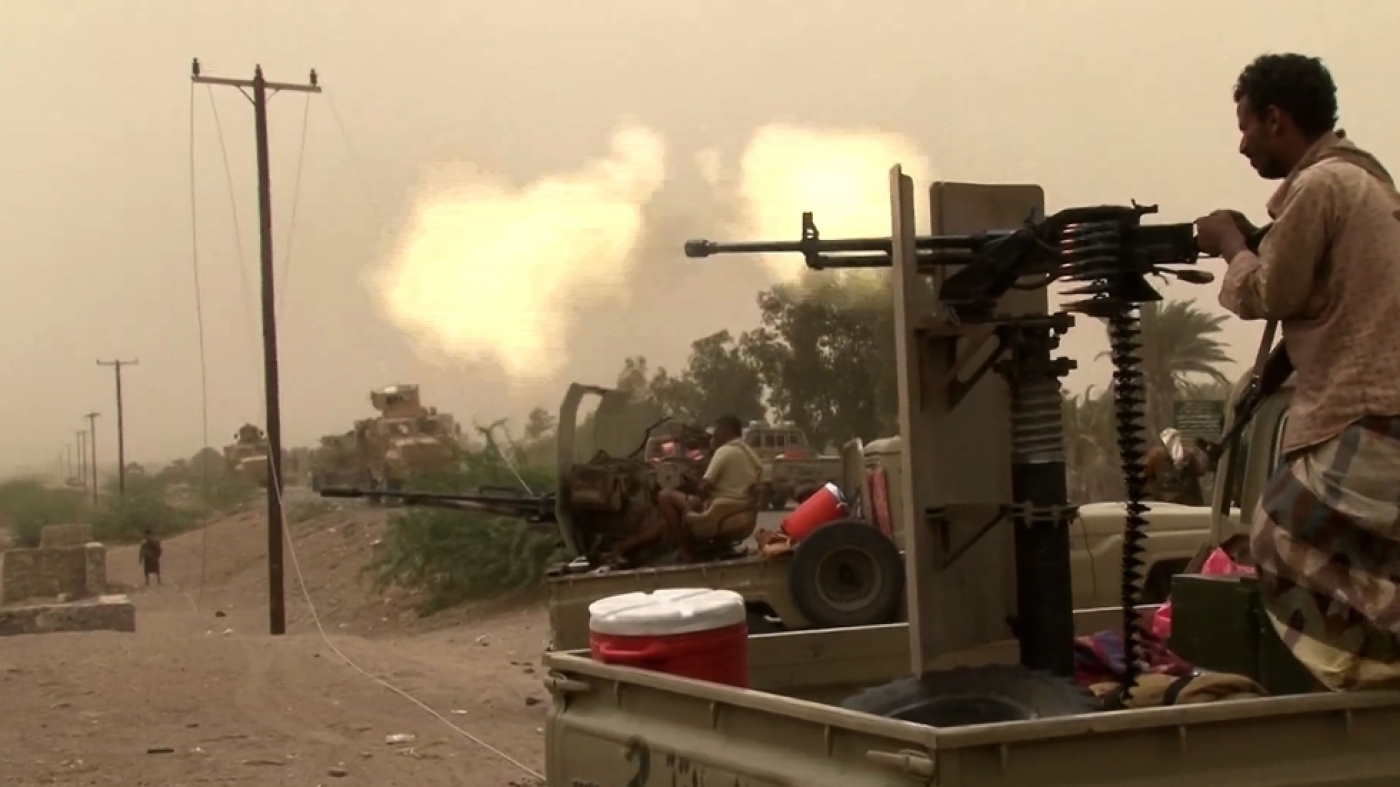 Trapped residents are expressing fear that they will soon be caught up in the fighting.

Mohammed Hadi, a resident of the city’s Ghulail neighbourhood, told Middle East Eye that fierce battles continued on Friday along Kilo 16 Street, the main road that is in dispute.

Hadi lives less than four kilometres from Kilo 16 Street, but he has not fled his house as he says it is more dangerous to leave.

"The main road was blocked and there are some bystreets, but they are not safe to go through because air strikes target any car in those streets,” Hadi said. "It is better to stay in my house waiting for death than to leave amid battles.”

The Saudi-led coalition has launched several air strikes against Houthi positions in Hodeidah in the past few days to help pro-government fighters advance.

During the past three days, Mohammed Hadi said that forces loyal to President Hadi have advanced towards Hodeidah, while Houthi reinforcements have arrived from the north and other parts of the city.

On Friday morning, Mohammed al-Boukhaiti, a Hodeidah-based member of the Houthi political council published a video from a different main road - Kilo 10 Street - which followed a video on Thursday filmed at Kilo 16 Street to claim that the Houthis have control of the roads.

"The Yemeni army [Houthis] confronted the attack of the coalition and today Kilo 16 is under the control of the army but it is not safe for passengers because the air strikes target them," he told MEE on Friday.

A coalition of states led by Saudi Arabia intervened in Yemen's war in 2015 against the Houthi rebels, after the latter drove the government out of Sanaa.

Saudi Arabia, UAE and allied local forces launched an assault in June to capture Hodeidah, a strategic coastal town, from the Houthis despite the protests of UN officials and Western governments.

Tens of civilians are believed to have been killed and more wounded in the clashes since then. Hodeidah resident Mohammed Hadi said he believes there are more civilians still inside their homes, too afraid to leave.

"My children cannot sleep at all and even if they sleep, the battles frighten them, so they cannot sleep well,” Hadi said.

"They are talking about death all the time and they do not enjoy anything inside the house. I think they will suffer from psychological trauma in the future because of the war."

Hadi said he and his family rarely buy food from shops in the area. He fears that one day soon, they won’t be able to leave their home at all.

"I want to tell the international organisations and the warring sides to take children into consideration. No one can imagine their situation in this war,” he said.

"We need the international organisations to intervene in Hodeida, to take us to safe areas out of the city because we cannot leave our houses.”

"Hundreds of thousands of lives hang in the balance in Hodeidah," Grande said in a news release on Thursday. "The situation has deteriorated dramatically in the past few days. Families are absolutely terrified by the bombardment, shelling and airstrikes."

"People are struggling to survive," she added. "More than 25 percent of children are malnourished; 900,000 people in the governorate are desperate for food and 90,000 pregnant women are at enormous risk. Families need everything-food, cash, health care, water, sanitation, emergency supplies, specialized support and many need shelter. It’s heart-breaking to see so many people who need so much."

The UN has said that Yemen is suffering from one of the worst humanitarian catastrophes in the world. Seventy-five percent of the population requires some form of humanitarian assistance and protection, including 8.4 million people who are on the brink of starvation.

Some civilians have fled Hodeidah to Sanaa as the fighting has drawn closer to the city.

Khaldoon al-Absi, a resident who fled the city on Thursday, said he travelled from Hodeidah to Hajja province and then to Sanaa, the safest route to the capital.

Taking control of Kilo 16 Street, he said, was only an “illusory victory” for the pro-government forces.

"The pro-Hadi forces are saying they will besiege the city, but in fact they can’t do that because there are several roads connecting Hodeidah to other provinces,” he told MEE.

Civilians taking buses from Hodeidah to other provinces have resorted to more expensive and circuitous routes to reach safety.

Many of Hodeidah’s residents have fled the city during the past three days. The markets are nearly empty and no one thinks of anything but the war, he said.

Hodeidah is a lifeline for millions of Yemenis across the country. About 70 percent of all humanitarian assistance and nearly all commercial food stocks for northern Yemen enter through the ports of Hodeidah and Saleef, just to the north of the city, according to the UN.

The closure of Kilo 16 or any comprehensive siege of the city would drastically impact people in the country’s northern provinces.

"After the closure of the main road, we resorted to paying more for transportation and this means commodities will increase more than before,” Jameel al-Qirwi, a trader in Sanaa told MEE. "The siege is not on Hodeidah city, but it will be on all of the northern provinces and that will affect millions of civilians."

In the last six weeks alone, houses, farms, livestock, businesses, roads, a water facility and a flour mill have all been hit

Hodeidah is also under threat of attacks on its food storage, which would affect the country’s northern areas.

"The mills in Hodeidah feed millions of people. We’re particularly worried about the Red Sea mill, which currently has 45,000 metric tonnes of food inside, enough to feed 3.5 million people for a month. If the mills are damaged or disrupted, the human cost will be incalculable,” said Grande, the UN humanitarian coordinator.

"So much has already been destroyed. In the last six weeks alone, houses, farms, livestock, businesses, roads, a water facility and a flour mill have all been hit."

Pro-Hadi forces say they are doing their best to avoid damaging any institutions.

A pro-Hadi field commander in Hodeidah spoke to MEE on condition of anonymity: "We have been advancing in Hodeidah according to a clear plan and the institutions and civilians are a priority for us, so we will not target mills or companies randomly".

"The Houthis are using houses and institutions as military barracks to lead us to destroy them, but will not target civil institutions".

He said that they had recaptured most of Kilo 16 Street, pointing out that the videos of Bukhaiti were taken on one side of the street.

"During the next few days, we will go after Kilo 16 to start sweeping the city from the Houthis," he said.

Civilians bear the brunt of the war

Freelance journalist Tareq al-Mallah, who is currently in Aden, said civilians are the main victims of the war, adding that people do not care who wins the battle but they care about their families.

"The pro-Hadi forces said the liberation of the city is the next step for the battles in Hodeidah, and the Houthis confirmed they will confront any attack, while people do not want to witness any war in the city,” Mallah told MEE.

"I hope that warring sides will be more rational and go to peace talks in Geneva to end this war. Wars always destroy countries".

"The most important thing for us is that we do not want to witness more wars," he said. "We can live under the leadership of the Houthis or Hadi, but not with wars."