'We shoot anyone we see': Iraqi troops shield border as IS prowls Syrian desert 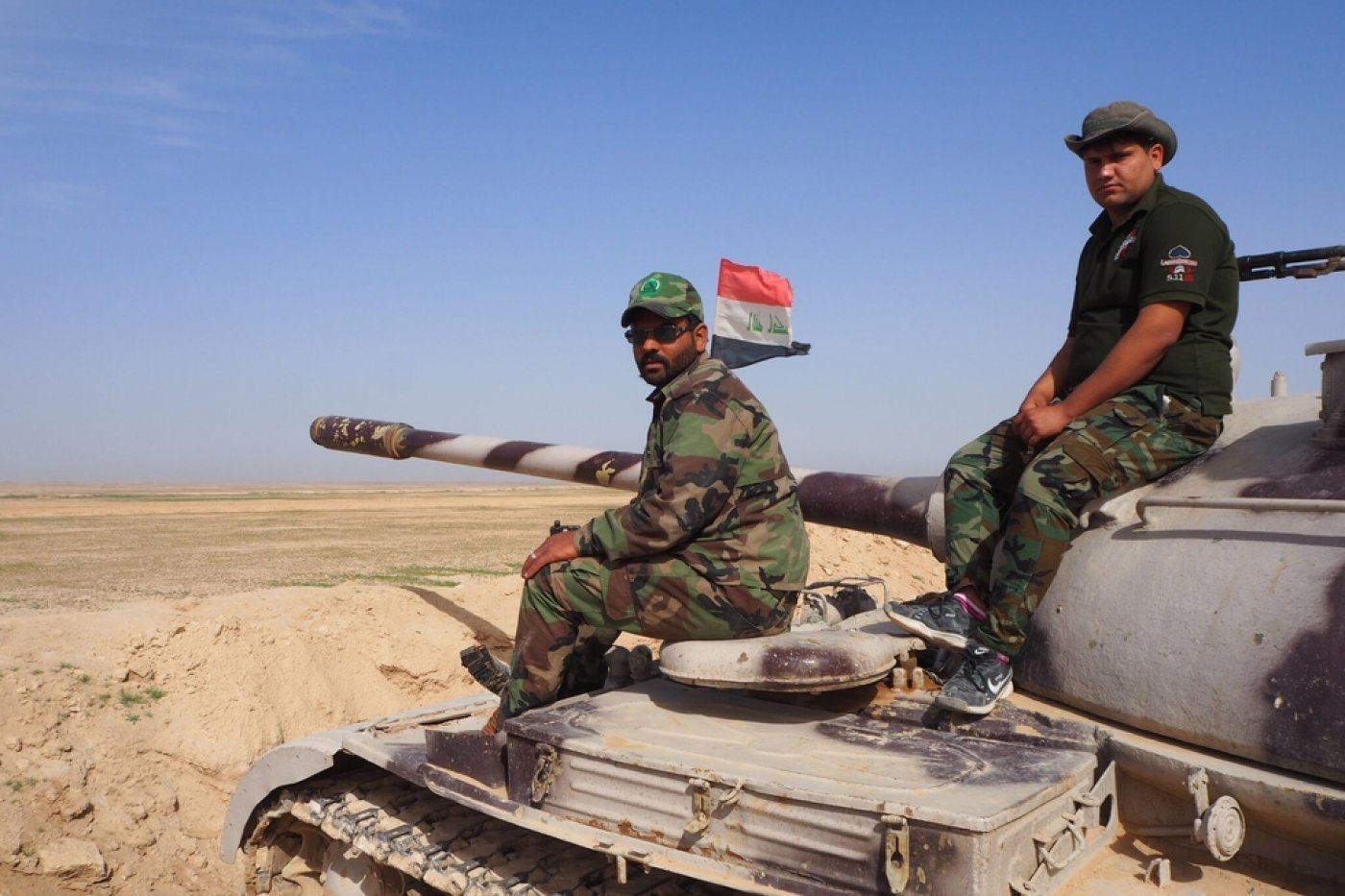 NORTH-WEST IRAQ, near Syrian border - The ramparts bristle with weapons at the ready: tank cannons, machine guns and sniper rifles jut from fortifications along a sand berm, all trained on the vast expanse of desert stretching across the horizon, as their operators scan for movement and prime themselves for the next attack.

These Iraqi soldiers are on the last frontline against Islamic State, and in regular contact. But the territory they watch is not Iraq - it is Syrian borderland still controlled by IS, and attacks into Iraq are so regular - and so violent - that the guards are ordered to kill anything that moves.

We shoot anyone we see approaching us, whether in a car or on foot. We treat any person or car in front of us as an enemy

Active IS positions lie just five kilometres from this borderline, and there are attacks every few days, often around sunset or sunrise - the times favoured by IS fighters.

"We shoot anyone we see approaching us, whether in a car or on foot," Abu Ali Khadem, the deputy commander of Brigade 20 of Iraq's Hashd al-Shaabi forces, tells Middle East Eye, as he watches the landscape from his border post.

"We treat any person or car in front of us as an enemy because the Syrian government doesn't yet control this part of its territory and it remains fully occupied by IS.

"We monitor the horizon 24 hours a day, with binoculars and night vision goggles. We never stop watching, especially at night because IS fighters use the darkness to move around and they know the area and the desert routes very well," says Khadem.

Only the day before, three armed vehicles opened fire on the Iraqi forces, before driving out of sight into a nearby wadi.

This 120km-stretch of Iraq's north-western border with Syria is controlled by 11 Hashd al-Shaabi brigades, all from the south of Iraq.

Commanders say it was one of the routes through which IS first entered northern Iraq in 2014, demolishing state border posts, checkpoints and military infrastructure as part of their plan to create a borderless "caliphate" across the region.

The border is now defined by sand berms and temporary structures.

But the soldiers face danger from all directions - IS remnants still prowl areas inside Iraq, and threaten the Hashd forces from the rear.

"We have a 360-degree problem here. We have the border in front of us and behind us stretches Iraqi territory where rogue IS elements are still operating," says Khadem.

"Mostly they hide and stage ambush suicide attacks, but others pretend to be shepherds and even have flocks of sheep with them but then, when they get close to us, they blow themselves up."

"Two of them blew themselves up when they realised they had been spotted - not close enough to cause any casualties - and we killed the third before he could detonate his suicide vest," said Khadem.

IS weapons turned on their creators

"Because we are constantly monitoring our surroundings, we can usually spot someone before they reach our positions, so we call these 'statement attacks' where IS are basically just showing us they still have a presence here in Iraq.

"Our job is to protect the border and stop anyone entering - IS, smugglers, anyone. And this is a military area so civilians are not allowed within 10km-15km of our positions.

"That's the way it works and that's the only way we can keep this area safe."

The Hashd forces have taken novel measures to reinforce their positions - near Khadem's lookout position, soldiers clamber over three captured IS vehicles - modified for use as car bombs but never deployed, and now repurposed for border control.

The thick metal sheets IS mechanics welded over the cars, designed to stop Iraqi forces shooting them out before they could reach their targets, are now painted with the Iraqi flag and plastered with colourful Hashd al-Shaabi logos.

The once-sinister vehicles, of a type IS used to attack advancing government forces for years, have here been turned against their creators and now defend Iraqi forces against incoming IS fire.

A few kilometres behind the border, Brigade 20's forces gather in a traditional Bedouin tent for early morning coffee.

Colourful rugs lie scattered across the sandy floor and an ancient camel saddle waits for any honoured guests who might arrive at this remote frontline.

Stationed at this border post for five months and clearly there for the long haul, the soldiers decided to bring some traditional customs from their hometown of Nassariyah in Iraq's south to the country's north-westerly borders.

"Our commander is from a very ancient and well-known family and is a tribal leader in civilian life," says Habib al-Maithem, a unit commander in Brigade 20.

Rogue IS hunted down in Iraq's vast desert
Read More »

"He believes in preserving historic traditions so we built this tent for meetings with leaders and soldiers."

And some 30km further north Abu Haider al-Jabouri, the deputy commander of Brigade 28, says the situation has stabilised since his unit first took control of positions in the area.

"In the first few months after liberation, the situation was very difficult because IS was still very strong in this area and it's a strategic location for them because it was one of IS's main routes between Syria and Iraq," he says.

"We had many battles and once we killed 50 IS fighters but the situation is more stable now because IS is quite damaged."

"We know from intelligence reports that groups of IS fighters are still trying to enter Iraq along this borderline but, to date, we have been able to defend against all such breach attempts."

Jabouri said the stretch his force controls is particularly challenging because it covers a village that sprawls across the border and where many residents have dual Syrian-Iraqi citizenship.

IS has repeatedly tried to use the village for sleeper cell activities and its civilians as a cover for IS fighters posing as civilians.

"We gave that village a lot of support - food and water, and we tried to reopen a school - but then, three months ago our forces came under attack there and we lost 12 men," he says.

"We lost trust in those civilians after that, but we still help them from time to time because they are human beings and not all are guilty. We know many of their sons joined IS but each man is responsible for himself, not the actions of his whole family."

And preparations are underway to help more civilians return to their former homes. An Iraqi bomb disposal team has just moved to the area to expand clearance operations.

"We go wherever we are sent and we're here to start clearing IEDs from deserted villages," says unit commander Hamid Raheem.

"We're anticipating the usual range of IS IEDs and explosives here but, as well as the homemade explosives, along the borders we have been finding a lot of repurposed government mines, which were originally laid along the border. IS dug them up and laid them elsewhere."

Raheem says his men cleared several hundred IEDs in one day in Beiji - where IS laid IEDs every metre across a 12km area in front of oil infrastructure they hoped to keep. But there is always more to find and after sharing their war stories over lunch, the men get back to the dangerous task at hand.

As IS has diminished in power and the Hashd brigades have become familiar with the landscape, understanding how best to defend it, IS movements have reduced from major attacks intended to break through the border to more of a show of military force and attempts at intimidation.

"We will eventually hand this position over to Iraq's border security forces but not until Syrian government forces take back full control of their side of the border and reach this line," says Khadem.

"Until that time, it remains an active conflict zone and too dangerous for the normal border guards to control."

Jabouri was critical of coalition activities in Syria, which his forces have been monitoring for months, and claims ulterior motives on the part of the Americans.

"Coalition warplanes conduct many sorties over this area, especially on the Syrian side of the border and sometimes carry out air strikes, but these are not proper operations, they are like children's operations," he says, shaking his head.

"We have been observing them for months and their operations clearly show us that they do not want to destroy IS."

He said low-flying sorties near border positions held by the Hashd appeared intended to instil fear into Iraq's forces rather than IS militants.

"We feel their main purpose is to make us nervous but we just laugh, because we know what the Americans are doing - they are trying to push IS back into Iraq so they can say US forces need to stay here," Jabouri says.