Unemployed protesters in Jordan who undertook marches covering hundreds of kilometres to the Royal Court to demand work - after being inspired by the example of one jobseeker and his family - have hailed an agreement with the government to provide them with 750 jobs.

The marchers, who signed the deal on Thursday following a guarantee from tribal leaders and businessmen, agreed to end their protest in Amman in return for the positions and a JD200 ($282) monthly salary until they begin their jobs.

Salah Abu Hillaleh, one of the marchers who walked 216km from the town of Maan in the south of Jordan in order to reach the capital, welcomed the victory. But, noting previous job offers had come to nothing, he warned: "We'll be back again if the government did not commit to providing us jobs."

Jordan is battling a soaring unemployment rate that hit 18.6 percent last year, rising inflation as a result of taxes on basic commodities and a national debt which stood at $39bn in 2018.

The kingdom has seen regular demonstrations since last May when a massive gathering of protesters first rallied against the government's economic policies and rampant corruption, resulting in the resignation of the prime minister in early June.

Since December, protests have been held each Thursday evening outside the prime minister's office, calling for economic and political reforms.

The march of the unemployed, which rapidly escalated across the country, was inspired by Falah Diab Arini, an unemployed graduate from Tafilah, a town about 170km southwest of Amman.

On 5 February, Arini, along with 12 members of his family, decided to march to Amman to join the protestors.

As they walked towards the capital, other unemployed Jordanians were inspired to march as well.

After the family had been walking for 13 days, the Jordanian minister of higher education and research offered, via Twitter, a job to Arini at Muta University in Karak.

Rather than resolving the issue, the appointment of Arini only served to increase the number of marchers.

Soon, 180 unemployed youths from Aqaba, a port city on the Red Sea about 336km from Amman, and tens of other jobless people from other Jordanian governorates, all marched to the capital. Soon they were sleeping in the streets outside the Royal Court. The Royal Court tried to contain the protestors by also making them job offers.

On 21 February, Yousef Issawi, the head of the Royal Court, promised to guarantee jobs for the youths from Aqaba, saying: "Whoever is under 30 can get a job with the security forces and those over 30 will get a job in the private sector."

Again, the job offers to the Aqaba unemployed only increased the appetite of the unemployed nationwide.

More protestors from Arini's hometown of Tafilah, as well as Ibrid, Mafraq, Jarash and Zarqa, began marching towards the Royal Court with the hope of being offered a job.

However, Issawi's promises of work turned out to be empty, bringing angry protestors back to the Royal Court and waving papers of job offers but no actual jobs.

Sleeping under a bridge

Before news of Thursday's deal with the government had been announced, Hillaleh and other marchers spoke to MEE about their experiences.

Hillaleh has been camped outside the Royal Court along with 900 other unemployed Jordanians for more than three weeks.

A university graduate, Hillaleh and his unemployed friends have been sleeping under the bridge which lies across from the Royal Court and have vowed not to leave until they get a job.

"We left Maan and the nearby villages in the cold weather and under rain looking for a work opportunity," said Hillaleh.

"We are a group of youth; most of us have university degrees, but we have been without work for years.

"We don't have enough for our daily subsistence. We have not met any government official.

"Our demand is simple: we want a stable job with social security benefits and health insurance."

'I want a real job not just words'

Ahmad Salem, who holds a BA degree in civil engineering, had a temporary job in Maan.

Once the temporary work ended, he found himself unemployed for four years.

"I will not leave the Royal Court until I get a stable job in the government. I don't trust the promises. I want a real job not just words," he told MEE.

Salem said that members of parliament and leaders of tribes had asked the protestors to leave considering they were promised jobs, but Ahmad insisted that "we will not leave until we actually get jobs and not just promises".

The government has tried to find ways to put a stop to the protests and explain what it feels is the reality of the economic situation by organising visits to various governorates and attempting to meet with unemployed youth.

However, the trips were quickly met with opposition.

On 6 March, a governmental visit to the Maan governorate was met with angry youth, who kicked out the visitors, asking them instead to talk to the protestors back under the rain outside the Royal Court rather than talking to them in heated halls.

Highest jobless rate in the country

The Maan governorate has the highest level of unemployed in the country at 21 percent, according to official statistics issued by the government in 2018.

Akram Krishan, the mayor of Maan, told MEE that the "real rate of unemployment in Maan is closer to 31 percent."

With a population of 180,000 people, Maan is considered the most marginalised and poorest city in the country, despite the fact that 13 companies there are working on solar energy projects.

- Jumana Ghnaimat, the minister of media affairs and government spokesperson

There are also potash and phosphate companies, but the region in the south of Jordan has not benefited from any development.

"We have no deep economic solutions," said Krishan. "The energy companies have invested in our land and have defiled the environment but has not employed our youth.

"There is no justice in how the development budget is spent.

"We need education, health and infrastructure projects to help us overcome the unemployment problem provided that they hire the sons of Maan."

Another says that a Jordanian official never disappears, but he is rejuvenated. This reflects the fact that top governmental jobs are inherited by the same class of people.

This absence of transparency or justice in many job appointments has added to the frustration of Jordan's youth, who feel the injustice of a system that benefits certain groups. 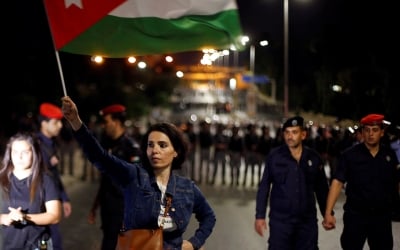 The latest scandal has seen the appointments of siblings of MPs to important jobs in the government of Omar Razzaz.

In addition, a number of appointments are being made in the Ministry of Justice without the competitive process that is required.

A leak of appointment letters made on 3 March, and distributed on social media, produced an angry reaction from Jordanians and forced the government to suspend the appointments.

This produced an angry response, with many commenting that the king should insist on justice and fairness in the appointments.

Sure enough, after a few hours, the king went back to Twitter and said there is a need to focus "on justice and integrity" when dealing with government appointments.

Jumana Ghnaimat, the minister of media affairs and a government spokesperson, told MEE that "unemployment is a big problem that can't be solved in a year or two years" but that the government is committed to offering 30,000 jobs in two years, in addition to 35,000 positions that the local private sector creates annually.

"We have 60,000 university graduates every year that are added to the already existing bloated unemployment sector," she said.

"This problem needs to be solved and that is why the prime minister has delegated the cabinet members to meet with the private sector to see if they can help create new jobs.

"In addition, the Ministry of Labour will be working on managing and organising the labour market and also creating local factories that can help provide local jobs."

As to dialogue with the unemployed youth, Ghnaimat said that ministers had met with the youth and offered them certain jobs, but they refused them.

"We suggested to them to join the security force and they refused. We even sent them private sector business people to offer them jobs, but they refused."

Speaking to MEE before the news of Thursday's agreement, the unemployed marchers outside the Royal Court insisted that they had not refused any job that was offered to them, but that they don't trust the government, and that they wanted concrete serious job offers in writing before they ended their protest.

With those assurances received, only time will tell if they receive transparency and justice, and if so, whether the government's latest move will only inspire more people desperate for work to begin the long walk from their towns and villages. 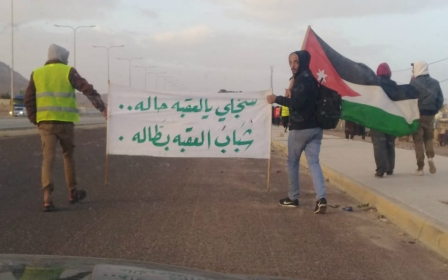