What Israel fears about Hamas and the Qatar crisis

Israeli academics, analysts and intelligence sources suggest it has more to lose than gain from the crisis 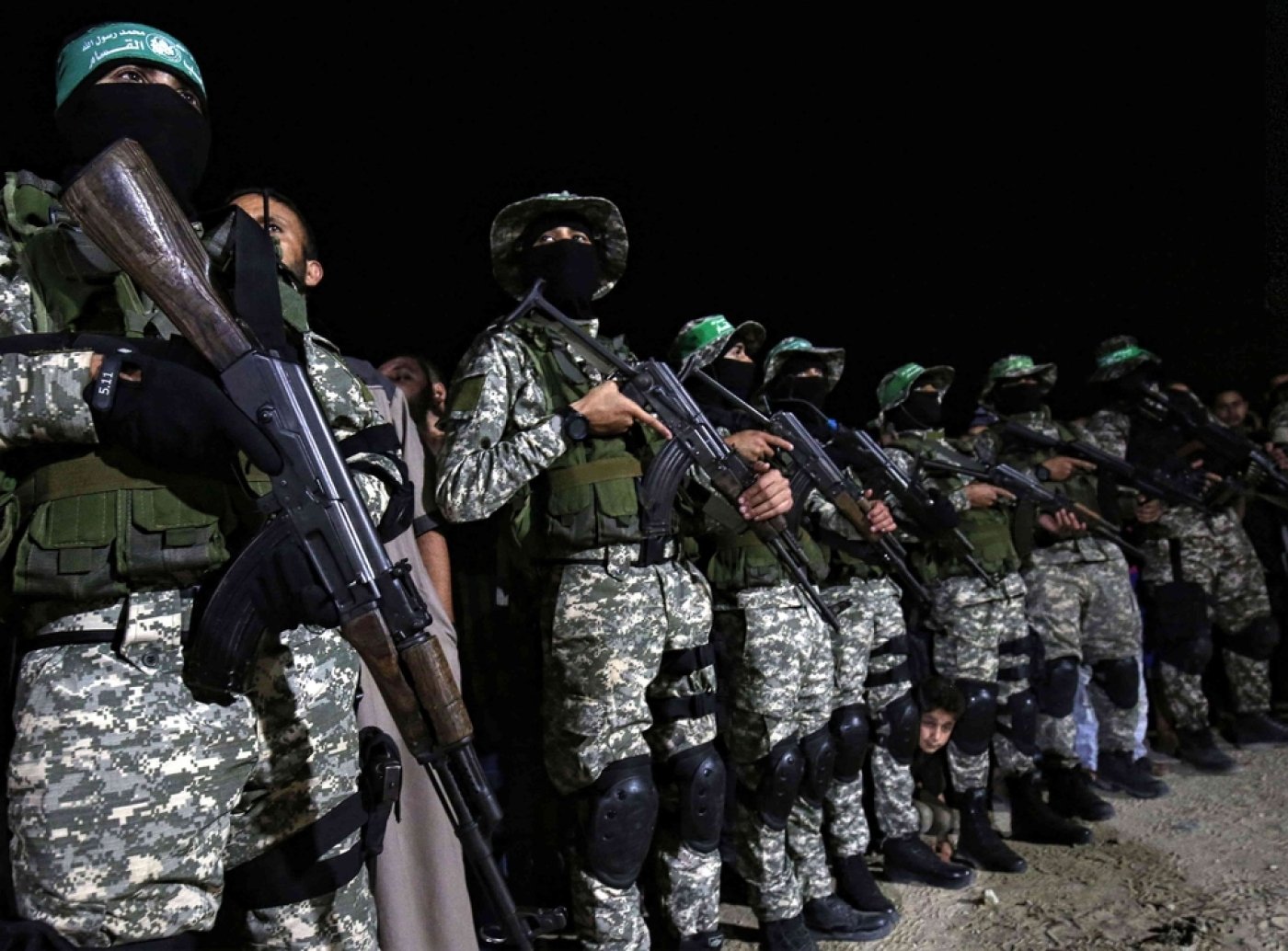 Fighters from the Ezzedine al-Qassam Brigade, the armed wing of Hamas, at a memorial service for Ibrahim Abu Al-Naja in Rafah (AFP)
By
Yuval Abraham

Israel has never approved of Qatar's support for Hamas.

But now Gulf nations are demanding that Doha stop supporting the Palestinian group – and Israel fears what might happen next.

Hamas, which has controlled Gaza since 2007, is regarded as a daughter movement of the Muslim Brotherhood, a longtime ally of Qatar.

The emirate has transferred hundreds of millions of dollars into Gaza, while assisting Hamas diplomatically by providing asylum for its exiled leaders and members. The group launched its revised charter in Doha in May.

After the last war in Gaza in 2014, Qatar committed $1bn towards reconstruction, humanitarian projects, electricity costs and state salaries.

Political analysts say that Israel has permitted the fund transfers into Gaza – which has been under Israeli siege since 2007 - because of their stabilising effect, which prevent or perhaps postpone a total collapse in the war-torn strip.

The sanctions taken against Qatar on 4 June were hailed as a victory by much of the Israeli public and media. But the government's response has been strangely muted.

Eli Avidar, former head of the Israeli delegation in Qatar, told MEE that Israel should aggressively back Saudi Arabia and others against Qatar. "This is an opportunity to finish this mess. Israel should lobby in Washington, press Qatar to stop funding terror, but it's not doing that.”

"I constantly ask myself: 'Why isn't Israel more active and outspoken in regards to move against Qatar?'”

Israel's minister of defence, Avigdor Lieberman, was the only state official who commented on the crisis. On 5 June, one day after Qatar was isolated, he said that the move "opens many possibilities for collaboration in the fight against terror”.

A spokesman for the Israeli foreign ministry told MEE that he had official instructions not to comment on the situation and its repercussions for Israel and Palestine.

What stands behind this passive response? Many Israeli academics, analysts and intelligence sources suggest that Israel might have more to lose than gain from the crisis.

''I constantly ask myself: 'Why isn't Israel more active and outspoken in regards to move against Qatar?'''

- Eli Avidar, former head of the Israeli delegation in Qatar

Yoel Guzansky and Kobi Michael at the Israeli Institute for Security Research at Tel Aviv University have said that the crisis is "the most serious since the establishment of the Gulf Cooperation Council in 1981”.

They argue that Israel has a dual approach towards Qatar. "On one hand, there's resentment about its support for Hamas and the asylum it offers its leadership… On the other hand, Israel attributes great importance to the Qatari support for the rehabilitation of the strip and the money it supplies for salaries and civil services in it.

"Israeli interest is to support an American mediation that will end the affair by undermining the status of Iran and Hamas, but without seriously harming Qatar's positive actions vis-a-vis the Gaza Strip and mediating with Hamas.”

Their report identified three possible outcomes that Israel wants to avoid: a stronger relationship between Iran and Hamas; a humanitarian collapse in Gaza; and a Palestinian Authority takeover of Gaza.

Several observers fear that the void created by Qatar's absence could force Hamas to seek an alternative source of financial backing – and turn to Iran.

The report by Yoel Guzansky and Kobi Michael said that "Israel acknowledges that there are more advantages than disadvantages in cooperation with Qatar, as Qatar weakens Iran's influence on Hamas and the Gaza Strip.”

Earlier this year, Khaled al-Qaddumi, Hamas' representative in Iran, told Al-Monitor that Iran is giving ongoing financial support for the movement, despite the regional polarisation between Shia and Sunnis, and that there are regular meetings.

"The beginning of 2017 has ushered in a new era for Hamas-Iran relations that can be described as positive and forward-looking," he said.

Meanwhile, Ahmed Yousef, a former senior adviser to Hamas leader Ismail Haniyah, told Maan that the Qatari crisis - as well as the coalition between Israel, America and the Sunni states – would "encourage Islamic movements, like the Muslim Brotherhood, to make new alliances with powerful countries in the area to protect themselves, like Iran."

Additionally, Guzansky and Michael said that the Sunni camp's wish to see the Palestinian Authority replace Hamas in the strip isn't shared by Israel, which critics say has been working to maintain the separation between the West Bank and the Gaza Strip.

2. Fear of another war

In 2014, Israel launched operation "Protective Edge" against Gaza, a 50-day assault aimed at weakening Hamas. It resulted in the death of more than 2,139 Palestinians, almost a quarter of them children, 64 Israeli soldiers and six Israeli civilians.

A high-ranking Israeli official, who worked with Mossad for many years and asked to remain anonymous, told MEE that while the Israeli government wanted Qatar to stop financing Hamas, it "doesn't want a real humanitarian crisis in Gaza, even though we're getting close to that.

"This situation could bring us to the same place we were in 2014, when Hamas was pushed to the corner and the only place they could shoot at was Israel. I presume Israel is afraid of this scenario, it doesn't want destabilisation in Gaza.”

Yanai also warned that a desperate Hamas losing financial support, coupled with talk of elections within the tense Israeli governing coalition, could make for a toxic mix. "It could provide fertile grounds for a war. Desperate politicians tend to go to war.”

A second Israeli intelligence source  – whose role is classified - told MEE that Israel is preparing for a war in Gaza, just as it does every summer - but he did not expect it to happen this year.

This could bring us to the same place we were in 2014, when Hamas was pushed to the corner and the only place they could shoot at was Israel

Hamas, for its part, is still weak from the last round of fighting in 2014. And Israel?

"It's against our interests,” the intelligence source said. "Israel wishes to maintain the status quo in the strip."

Since 2004, Israel has waged seven assaults on Gaza in response to rockets being fired at it from the strip. Critics say this status quo of war is fuelled by a lack of diplomatic solution to the Palestinian refugee problem and the Israeli military occupation.

3. Fear of the Palestinian Authority

On Sunday, the Israeli cabinet agreed to reduce Gaza's electricity supply at the request of PA President Mahmoud Abbas.

The move is seen as an attempt by the PA, which controls the larger West Bank, to weaken its political rival. Tareq Rashmawi, the spokesman for the PA, demanded that Hamas "hand over to the PA all responsibilities of government institutions in Gaza”, according to Reuters.

But Israel Katz, Israeli minister and cabinet member of the Likud party, on Monday criticised the reduction, saying at the annual Israeli Peace Convention that "Israel has no policy towards Gaza”.

And Israeli Prime Minister Benjamin Netanyhu said that Israel "doesn't wish to see an escalation" in Gaza, describing it as "an internal Palestinian dispute”.

The official who worked with Mossad echoed that sentiment. "It's hard for me to explain Israeli policy towards Gaza,” they said, "there's no logic in it.

"The electric cut could be some kind of pressure tactic on Hamas, so they agree to return the bodies of Israeli soldiers and the three Israelis they are holding.”

But Hamas has served its own warnings.

It said on Twitter on Monday that the decision would "hasten the deterioration and explosion of the situation in the Strip.”

An Israeli intelligence source told MEE that another round of fighting in Gaza is just a matter of time. "If not this summer then the next one, and if not, then one after that, for sure.” Gulf Tensions
Qatar and the Gulf crisis: How it's dividing Yemen