'Where is Avera?': 1,000 days since Ethiopian-Israeli went missing in Gaza

Campaigners say his predicament has been completely ignored by the Israeli government, public and media 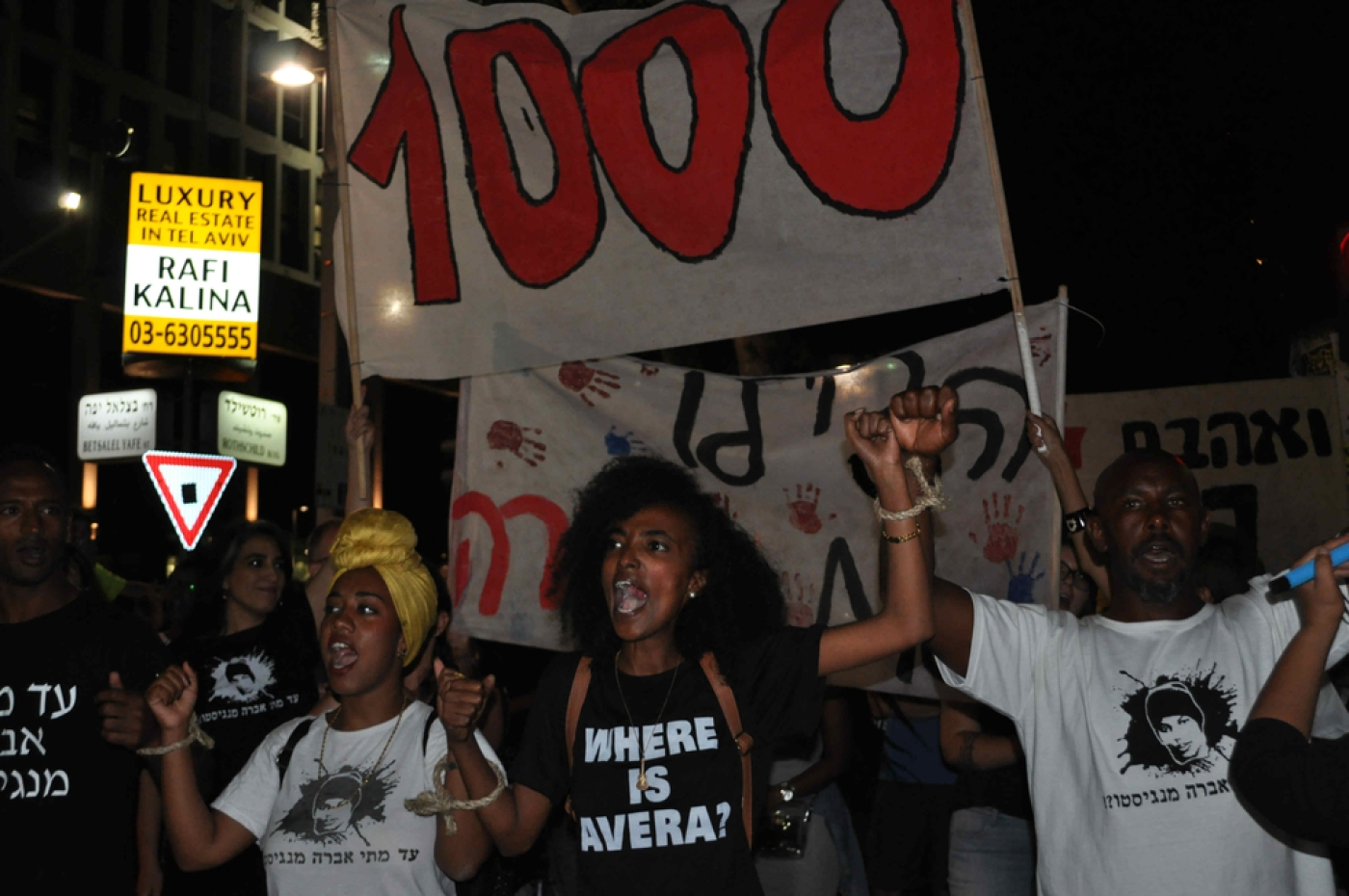 Campaigners staged a protest in Tel Aviv to mark 1,000 days since Avera crossed into Gaza (Yuval Abraham/MEE)
By
Yuval Abraham

One thousand days ago Avera Mengistu, a 30-year-old Israeli citizen of Ethiopian descent, entered the Gaza strip on his own and was promptly taken into captivity by the Palestinian movement Hamas, which controls the coastal enclave.

Reportedly suffering from mental illness, Mengistu climbed over the fence separating Israel and Gaza in September 2014. He is one of three Israeli citizens said to be held by Hamas.

Marking 1,000 days since his imprisonment, activists on Saturday demonstrated in Tel Aviv in the hope of drawing public attention to Mengistu, who they say has been abandoned by the Israeli government, media and public.

Yonit Tlayenesh Fenta is the head coordinator of the Committee for the Release of Avera Mengistu, a modest group of Ethiopian activists working to introduce the public to Mengistu’s case.

Fenta is a longtime friend of his family, who live in Ashkelon in southern Israel, and said it has been an uphill struggle to get the public interested in Mengistu's case.

"Avera falls into several groups that are oppressed and 'invisible' to Israeli society," she said.

"He's mentally unstable, the kind of person we ignore when we see on the street; he comes from a troubled neighbourhood; he doesn't have a rich family with status and connections, and we can't ignore the big elephant in the room – he's black."

Mengistu was not the first Israeli to be taken hostage by Hamas. Gilad Shalit, a white Israeli soldier was captured by Hamas in 2006 and was held for five years until his release in a prisoner exchange agreement. Comparing the two cases reveals an uncomfortable truth.

In the first case, an extensive, widely covered public relations campaign titled "Gilad is Still Alive" was waged, sweeping the entire Israeli public behind it.

It included mass marches, a protest encampment, and daily media coverage which marked every passing day since Gilad's capture.

Jewish Israeli families tended to leave one chair empty for Gilad during the traditional Passover meal, prominent artists and celebrities held fund-raising performances, and he was widely referred to as "the child of us all".

In stark contrast, Mengistu's name is rarely mentioned on Israeli media and most Israelis are unaware of his existence. Lacking public support, the campaign for his release can barely afford to make signs or T-shirts for its activities.

"We have to face the fact that Avera won't become 'the child of us all' like Gilad," Fenta told MEE, "but still, the family is sad to see that they are being ignored to such an extent."

Other reasons for this neglect could be that the Israeli public tends to identify more with soldiers, and that they don't want to release more convicted terrorists in another prisoner exchange with Hamas, she said.

"The Shalit family could afford to finance a struggle, fly all over the world, halt their lives. Even if they had no money the public was very active and raised the funds for them," Fenta said.

"In this case the family can't afford to stop working. They are too busy surviving the hardships of day-to-day life. The mother works as a cleaner. She told me her work distracts her from thinking about Avera, but I see how exhausted she is because of it.

"Every meeting we go to breaks her physically and mentally. She's an elderly woman. I don't know what to tell her. It's hard, very hard.

"She reached a place where she's saying: 'I just wish they'd tell me if he's dead or alive, if I should mourn him or not."

MEE talked to Avera's brother, Ilan Mengistu, about the way the family has been dealing with the tragedy. He said the hardest thing for him is to see his parents' helplessness.

"They worry about Avera on a daily basis but barely understand what's going on and can't help him."

"It's like their lives filled up with darkness ever since he left, and that darkness only increases because they feel the government ignores them," he said.

According to Israeli media, in February Hamas rejected an offer to exchange Mengistu for a mentally disabled Palestinian jailed in Israel.

According to Fenta, the state doesn't keep the family in the loop. "We'd expect a meeting with the prime minister, with people who make decisions, but it doesn't happen, we aren't getting answers."

The family doesn't even know if Mengistu is dead or alive.

"An unofficial source told us that Avera is alive and is held by Hamas, but this was over a year ago," Fenta said.

The Israeli army refused to comment on MEE's request for information on Mengistu's current physical condition.

"This story is not about some crazy black man that jumped over the fence, it's much more complex and sad than that," Fenta told MEE.

"Avera was sick for two years, after his brother Michael, a prominent figure in the family whom he was very connected to, suddenly died of a sickness. He was never the same after that."

Fenta said the family tried to help Mengistu, but received no professional help, which made things more difficult for the large, nine-person family, already dealing with economic and immigration difficulties.

"His mother Agernesh repeatedly contacted the city’s authorities and welfare for help but they didn't pay any attention to her," Fenta said.

“She eventually decided to go and talk to the police. She told them: 'My son is deteriorating mentally, secluding himself in his room; I'm scared for his life.

"She barely knows Hebrew, and fought to express herself with what very little she knew, but all of the people she talked to completely ignored her."

Most Israeli-Ethiopians migrated from Ethiopia to Israel in the 1980s. They are the only black community in Israeli Jewish society, and recent years have seen a spike in protests against police violence, racism, and the tracking in education targeted against the Ethiopian community.

After Mengistu entered Gaza, Israel issued a gag order prohibiting any discussion of the incident in the media. According to his brother Ilan, state representatives approached the family and told them not to talk to anyone about what happened.

"Our biggest mistake was that we believed the government," Ilan told MEE.

The government lied to us ... Three whole years have passed and today they just ignore his existence

"For 10 months they told us that if we stayed quiet, it would help them save Avera. Looking back, I think these first moments were critical in locating him and obtaining information.

"The government lied to us – they didn't do anything. Three whole years have passed and today they just ignore his existence," he said.

This sense of disregard was highlighted, Ilan said, during US President Donald Trump's recent visit to Israel, during which Israeli President Reuven Rivlin asked him to help retrieve the bodies of two dead Israeli soldiers held by Hamas but did not mention Avera.

To mark this grim anniversary of Mengistu's disappearance, around 300 protestors gathered on Saturday, marching along a popular boulevard in Tel Aviv.

The turn-out was larger than expected, as one demonstrator said: "I'm surprised to see so many white faces here."

"The main goal of this march is to recruit the Israeli public, we want them to be aware of what is happening, or more precisely – not happening," one of the organisers said in an opening statement.

Slogans such as "Avera was born to be free!" and "We are all Avera Mengistu" were among the chants heard at the rally.

Curious passersby stopped to ask about Mengistu, and who he is, and many were clearly surprised to learn of his story for the first time.

"Unfortunately, this subject isn't brought up in the Knesset enough. I can tell you that it's not at the head of priorities of the current government," he told MEE.

"The masses have to go out to the street to protest and create public pressure on the government. We witnessed it with Gilad Shalit – it's the only way to get the government to do what they can to release Avera."

But gaining the public's empathy doesn't seem to be an easy task. "As of now only a handful of people support us," his brother Ilan said, expressing his hope that this increases.

China Woolf, a protester wearing a yellow shirt that read "Avera is still alive," said he always wears the shirt to football games so more people are made aware of Mengistu’s case.

"The public is just disconnected, they don’t hear about him," he said.

Imaye Taga, an activist and Ethiopian-born Israeli football player, told MEE: "Avera is the type of person people prefer not to deal with: he's poor, from the periphery, black - he doesn't interest them.

"The media is also a big part of the problem. They aren't interested in him either. For example, they could mention the amount of days Avera sits in prison every day, like they did with Gilad Shalit, but they don’t."

Avera is the type of person people prefer not to deal with, he's poor, from the periphery, black - he doesn't interest them

According to Fenta, the campaign must stop focusing solely on Mengistu's skin colour as the reason behind his neglect.

"We know it plays a part, but there are other reasons as well. The media likes to talk about racism, but that discourse creates antagonism and distances our supporters.

"People don't want to feel guilty, or racist, so they attack back," she said.

"Instead, I believe a discourse of solidarity can be more effective: 'The Israeli people are strong, united,' 'love they neighbour,’ etc. Previous events showed us that the more optimistic and positive our messages were, the more support we got from the public.

"I think all of this is some kind of a civil test for us. It deals with the Israeli society, and the empathy it can show towards people. I still have hope that it can happen. If not, I wouldn't have been doing this for the past three years." 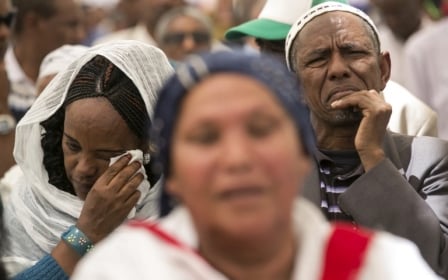