'Where has grandad gone?': The crushing of Turkish journalists

Turkey's government has hit opposition media with mass arrests and shutdowns. For the family of one journalist, it has destroyed their lives 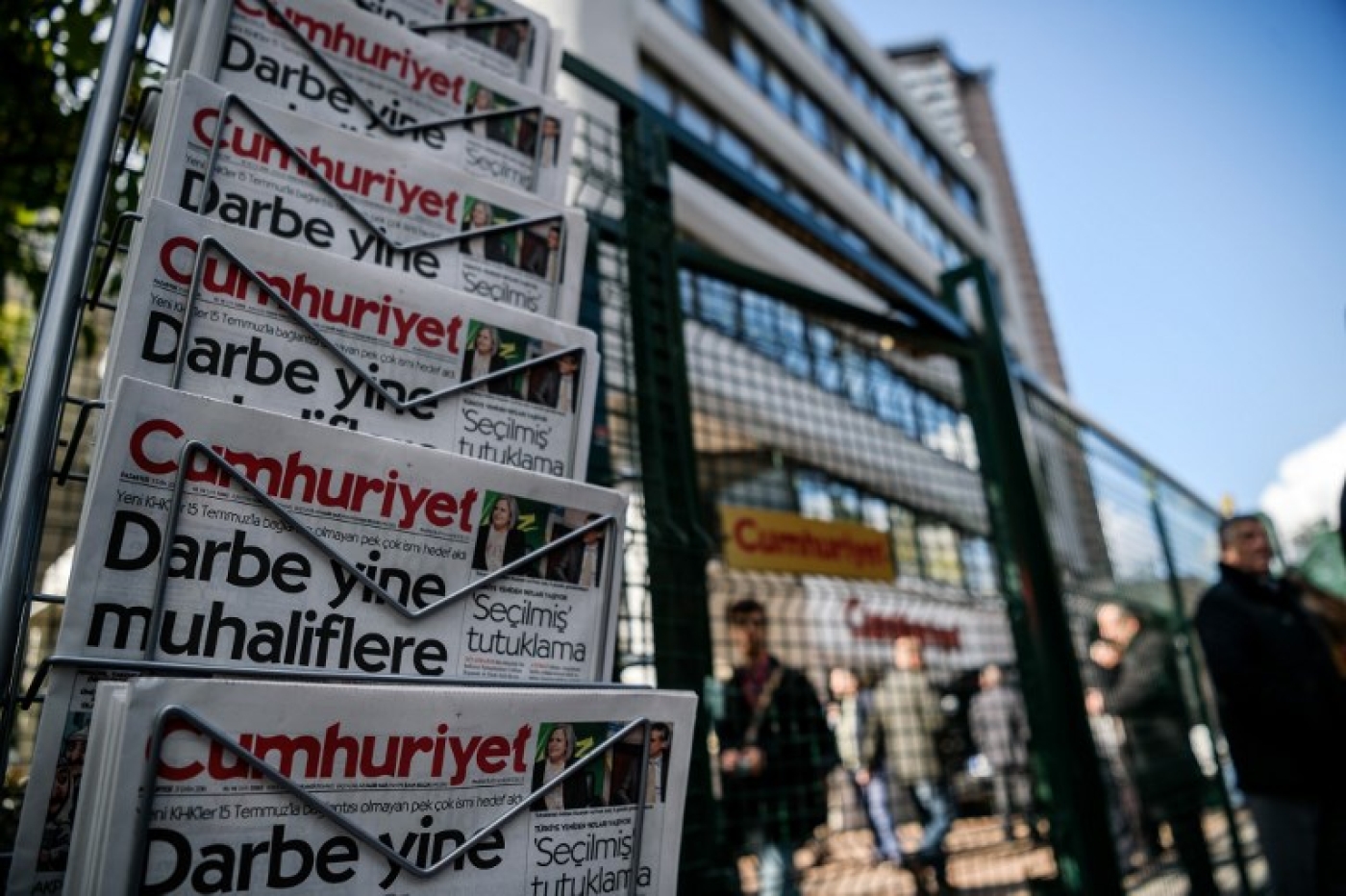 People standing next to copies of Cumhuriyet newspaper, whose editor-in-chief was arrested on 12 May (AFP)
By
MEE staff

A police raid at dawn. Then being bundled into a police van and treated like a criminal. Turkish journalists and their families have become all too familiar with this scenario.

On 12 May, Oguz Guven, the web manager at the secular Cumhuriyet newspaper, tweeted out "I am being detained" at 7.15am as policemen took him away from his Istanbul home.

The headline was about the death of a chief prosecutor in a road accident. Guven was charged with "conducting propaganda for a terrorist organisation".

To many, these events have become everyday occurances. But for Demet Guven Akyildiz, 35, who learned of her 59-year-old father's detention while browsing the news on the internet, it was a plunge into despair and the violent disruption of their family life.

Akyildiz was distraught when she spoke of the severed bond between her father and her almost three-year-old son Aren. Guven's life revolved around his grandson and he spent every moment he could spare with him.

In response to Aren's constant queries of "Where has my dede [grandad] gone?" the 35-year-old Akyildiz has to concoct a lie, saying he has gone on holiday and will return soon.

"Every time the doorbell rings he runs towards the door shouting 'my dede has come'. It breaks my heart every single time," Akyildiz told Middle East Eye, unable to hold back her tears.

Cumhuriyet, a secular newspaper, has been accused of promoting the agenda of both the Kurdistan Workers' Party (PKK) and the Gulen movement led by US-based preacher Fethullah Gulen, which Turkey blames for the failed 15 July coup attempt.

The headline over which Guven was arrested related to the 10 May death of chief prosecutor Mustafa Alper in a road accident. Alper was the first prosecutor to prepare an indictment against FETO, an acronym for the Fetullahist Terrorist Organisation, the name given by the Turkish state to Gulen and his movement.

My father hasn't done anything wrong. He was arrested for a headline that wasn't even written by him

"How can anyone prepare for such a thing and what is there to prepare for? My father hasn't done anything wrong. He was arrested for a headline that wasn't even written by him and was only online for less than a minute," said Akyildiz.

"Everyone knows the general situation in the country. You sometimes naturally ask yourself if it will someday be your family's turn but then brush it aside because you want to believe that you won't be targeted since you have done nothing wrong," she said.

Guven already has 12 colleagues from Cumhuriyet who have been languishing in jail for more than 200 days without having gone on trial yet.

And there are plenty of similar tales of family woes, with more than 150 journalists currently behind bars.

Having recently graduated from law school, the daughter of one detained journalist said she never imagined having to use her professional training to represent her incarcerated father.

Another imprisoned journalist's wife said that she had been forced to lie to her son about his father's whereabouts. Trying to convince the boy that his father is on a study abroad trip, she buys him toys and tells him that they were sent by his father.

An intense crackdown has resulted in the closure of more than 160 media outlets since a state of emergency was declared on 21 July after the coup attempt, leaving just a handful of independent media players.

Most were closed down for being linked to Gulen or for having views that differed significantly from that of the government when it came to the PKK. Turkey, the US and the EU list the PKK as a terrorist organisation.

A handful of self-sustaining and critical print and television media have survived the onslaught so far. Among them are Cumhuriyet, which still functions despite the arrest of its editor-in-cheif and a score of its employees. Also still surviving is the ultranationalist Sozcu, and left-leaning newspapers Birgun and Evrensel. Similar broadcasters still on air include Fox TV and Halk TV.

They too, however, are now being increasingly targeted despite their clear and long-held anti-Gulen positions.

On 19 May, the purge spread to Sozcu with detention warrants issued for the owner and three staff members. They were accused of attempting to inform the coup plotters of the president's location at a luxury seaside resort in Marmaris on 15 July, the night of the botched coup. The basis of the charge is a news article that was published on 15 July with the headline "Sozcu located Erdogan".

The fiercely anti-Gulen and anti-government newspaper has dismissed these claims, saying it was merely trying to locate and report on the venue where the president was vacationing.

Private mainstream media outlets with mass reach and high visibility have become increasingly allegiant and toe the official line in their reporting and coverage.

The major holding companies and conglomerates that own most of the Turkish mainstream media have other business interests in lucrative sectors such as construction, energy production and distribution.

These businesses often involve major state involvement in terms of regulations, the granting of operating licences and tender processes. Turkey's mainstream media’s ownership structure and allegiant reporting predate the AKP. However, that trend has intensified during its time in power.

In the past too, mainstream Turkish media sought to protect their business interests by adapting their positions to whoever was in power - including the military.

Maintaining hope that justice will eventually prevail is the only solace for imprisoned journalists and their families who have paid a steep price for just doing their jobs.

Most remain in prison on vague and broad charges of aiding and abetting a terrorist organisation or conducting propaganda on its behalf.

Guven's daughter Akyildiz has visited her father since his detention. She said his first, last and almost every other remark in between was about his grandson Aren.

"My father is not giving up hope. And despite how everything looks now we are not giving up hope that justice will prevail. I know my father has not done anything wrong. We will all hold our heads high," she said.