Face-off will be about more than football, reviving old colonial wounds and identity debates 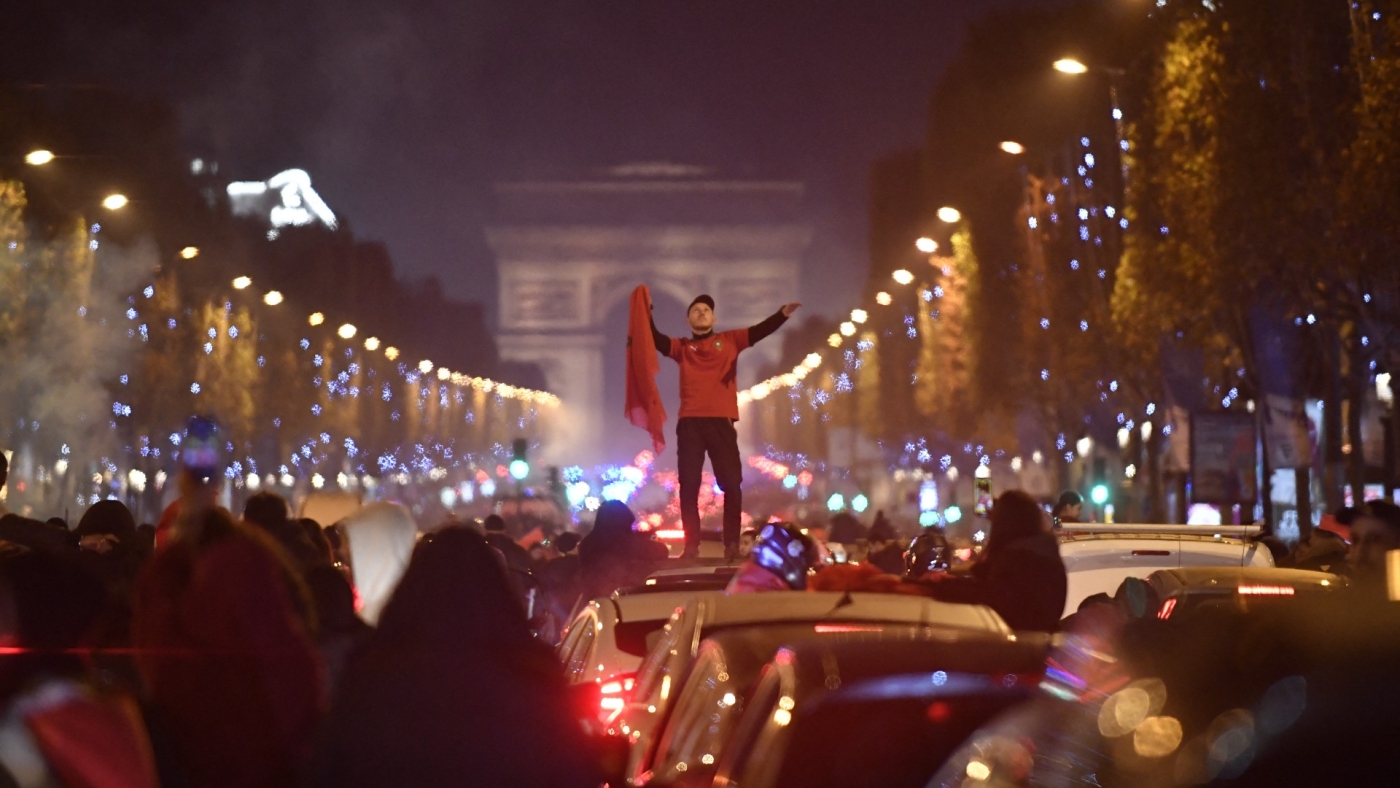 A Morocco supporter celebrates his national team's victory against Spain on the Champs-Elysees in Paris, on 6 December 2022 (AFP)
By
Samia Lokmane
in
Paris

When Morocco faces off against defending World Cup champions France on Wednesday, a lot more will be at stake than simply clinching a slot in Sunday's final against Argentina.

For the millions of North Africans who live in France, and Paris in particular, the contest will be a deeply personal and political affair.

Some of the matches at this year's tournament have been rife with political tension, such as the group-stage clash between Iran and the United States. Morocco and France are far from geopolitical rivals, but their long and complex relationship has served as a major backdrop to the game in Al Khor.

Sitting in their apartment in Bergeries-Saint-Hubert, a working-class neighbourhood in Paris, Oumaima and her husband Mohamed said the upcoming game had gripped the Banlieues, with residents divided on who they would be rooting for.

"Morocco is the blood that runs in our veins," Oumaima told Middle East Eye, before adding that "France is in our hearts."

Morocco has stunned the world by dispatching Belgium, Spain, and Portugal on their incredible run to the semi-finals. Unlike some Cinderella stories that combine a lot of luck with opportunity, the Atlas Lions have out-wit and outworked their opponents on their path to history.

The dream run has given the diaspora a rare chance to openly celebrate their cultural heritage in a country where far-right political parties are on the rise and there is growing intolerance towards Muslims and visible signs of religiosity such as hijabs or beards. 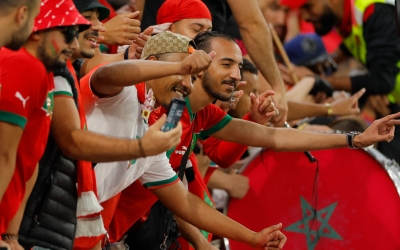 Mohamed told MEE that when the final whistle blew at the end of the Morocco vs Portugal match, he felt the ground shake as if there was an earthquake.

Ululations belted out of every window and there was incessant honking of cars. Later, around 20,000 Morocco fans descended onto the Champs-Elysees to celebrate.

After spending around an hour outside with his neighbours in the freezing winter cold, examining every critical moment of the game, he came back indoors to watch France edge out Gareth Southgate's England team.

"This French team, it kind of belongs to us young men in the suburbs," he said.

"Kylian Mbappe, Ousmane Dembele, Jules Kounde, they all come from our world. As children, we all played on the same football pitches, went through the same problems, suffered the same miseries."

'Even prouder of our roots'

In 2018, when France won the Russia World Cup, Mohamed took his family to the Champs-Elysees to celebrate.

This time around he'll do the same way if France beats Argentina, or he'll jet out to Casablanca if the Atlas Lions manage to pull off the greatest of all upsets.

His friend Rachid, who will be watching the match with him, takes him at his word and says he'll tag along in the event of a Morocco victory. 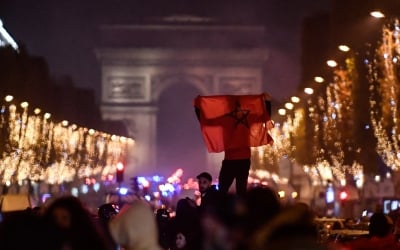 "The players have made us even prouder of our origins. I get emotional every time I see the Moroccan flag waving in the stands," he told MEE.

"When I see Achraf Hakimi run towards his mother after each game to kiss her, I remember my own mother. She too was a cleaning lady who worked hard to bring up her children on her own."

Although he was born in France and grew up there, Rachid's fully backing the Moroccan team, highlighting that sense of dual belonging.

France's Moroccan diaspora is one of the largest in Europe, with more than a million Moroccans living in the country. Hundreds of thousands of them are dual citizens, according to a 2015 parliamentary report.

The former deputy of the French National Assembly, M'jid El Guerrab, like Rachid, is also backing his ancestral home country.

"If I really had to choose, to say where my heart lies, it would of course be Morocco, because their incredible performance in this world cup stands for more than just the success of a normal team.

"Their victory in the World Cup would be a victory for Africa, for the continent. It would be David winning over Goliath."

Leila, an Algerian student who lives in Paris' southeast suburb, Val-de-Marne, was also revelling in the streets when Morocco beat Portugal, albeit with her own country's flag.

"Morocco's victory is also a victory for Algeria and for the Maghreb," she told MEE. "The governments of the two countries may hate each other, but not us. We are brothers and sisters."

The young woman was moved upon learning that in 1958, Fifa expelled the Moroccan national football team for a year, for playing a match against the Algerian National Liberation Front football team. Because back then, in its pre-independence years, Algeria wasn’t recognised by Fifa as a country.

Her fiance, Moncif, who is of Tunisian origin, also vouches for the shared affection between North African nations. He remembers celebrating with the same enthusiasm in Paris when the Algerian Fennecs won the Africa Cup of Nations in 2019. 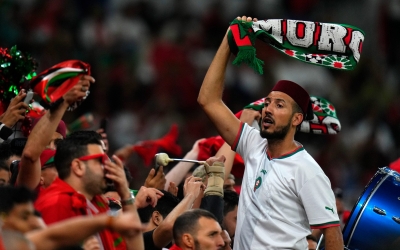 "The atmosphere last night was exactly the same," he said, showing photos on his phone of the joyful and colourful crowd at the Champs-Elysees.

In these photos, there are Amazigh, Algerian, Palestinian and Egyptian flags side by side with the Moroccan ones. "I also met Senegalese, Cameroonians, and Ivoirians, all happy to celebrate Morocco's victory," said Moncif.

Back in Bergeries-Saint-Hubert, Boubakari, one of Mohamed's neighbours, also supports the Moroccan team.

But at the same time, the Franco-Malian has not completely set aside his loyalty to the Blues. "I'm delighted that the two teams have made it through to the semi-final. But I'm not very keen to see them meet each other on the pitch" he admitted, somewhat shamefacedly.

Oumaima, who understands Boubakari's viewpoint, feels the same dilemma keenly: "France-Morocco: it would be like my father playing against my mother," he said.

While they wait for the match scheduled for Wednesday, the mother of the family is relishing in the joy and sharing it. After the victories of Morocco and France, she gave out sweets to all of her neighbours.

Mohamed, for his part, rushed to the telephone to call Arnaud, one of his old school friends to whom he has remained close and who is a die-hard Blues fan. "I said to him that I would be happy whichever team won the match, but the same couldn't be said for him!"

This piece was originally published on Middle East Eye French. 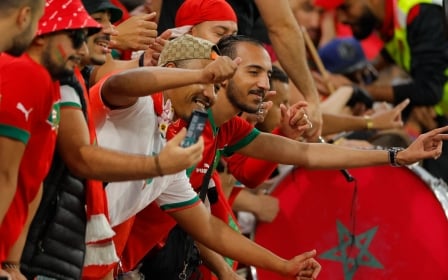 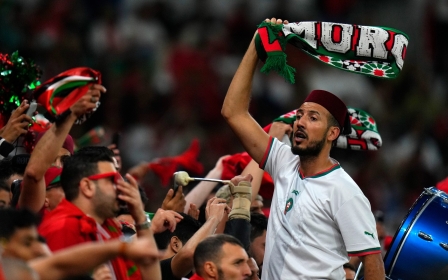 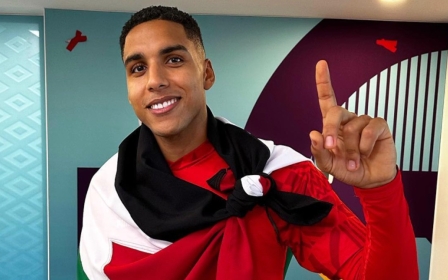