WWE to stage wrestling event in Riyadh amid Khashoggi crisis In spite of the global condemnation of Saudi Arabia for its role in journalist Jamal Khashoggi’s murder, one entertainment company is defending its relationship with the Gulf kingdom: World Wrestling Entertainment.

WWE on Thursday said it will go ahead with a high-profile wrestling event, slated for 2 November in Riyadh - exactly one month after Khashoggi was killed inside the Saudi consulate in Istanbul.

"WWE has operated in the Middle East for nearly 20 years and has developed a sizeable and dedicated fan base. Considering the heinous crime committed at the Saudi consulate in Istanbul, the company faced a very difficult decision as it relates to its event," WWE said in a news release.

"Similar to other US-based companies who plan to continue operations in Saudi Arabia, the company has decided to uphold its contractual obligations to the General Sports Authority and stage the event," it added.

Considering the heinous crime committed at the Saudi consulate in Istanbul, the company faced a very difficult decision as it relates to its event

According to a Bleacher Report article on Thursday, the company's deal with Saudi Arabia is worth $450m.

The company has hosted events in Saudi Arabia before. In April, WWE hosted its "Greatest Royal Rumble" event in the coastal city of Jeddah, bringing big-name wrestlers John Cena and Triple H to compete.

The event was originally co-sponsored by major Western media organisations - including Bloomberg, CNN, the New York Times and Fox Business News - but they all pulled out of the event.

The finance ministers from France, the UK and the Netherlands also withdrew amid growing public pressure, as did US Treasury Secretary Steve Mnuchin, though he is expected to go to Saudi Arabia this week for an unrelated anti-terror financing meeting.

Khashoggi, a Saudi insider-turned-critic who worked as a Washington Post columnist, was last seen on 2 October when he entered the Saudi consulate in Istanbul to retrieve paperwork for his planned marriage.

After more than two weeks of denials and shifting stories about what happened, Saudi officials said that Khashoggi was killed inside the consulate after a fight broke out. On Thursday, they changed their story again, saying that his death was premeditated. 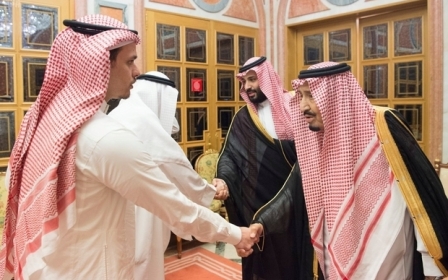