Yemen: Dozens including children killed in air strike on party in Al-Jawf

An air strike on a residential area in Al-Hazm city reportedly killed 25 people, as Saudi attacks intensify in Yemen 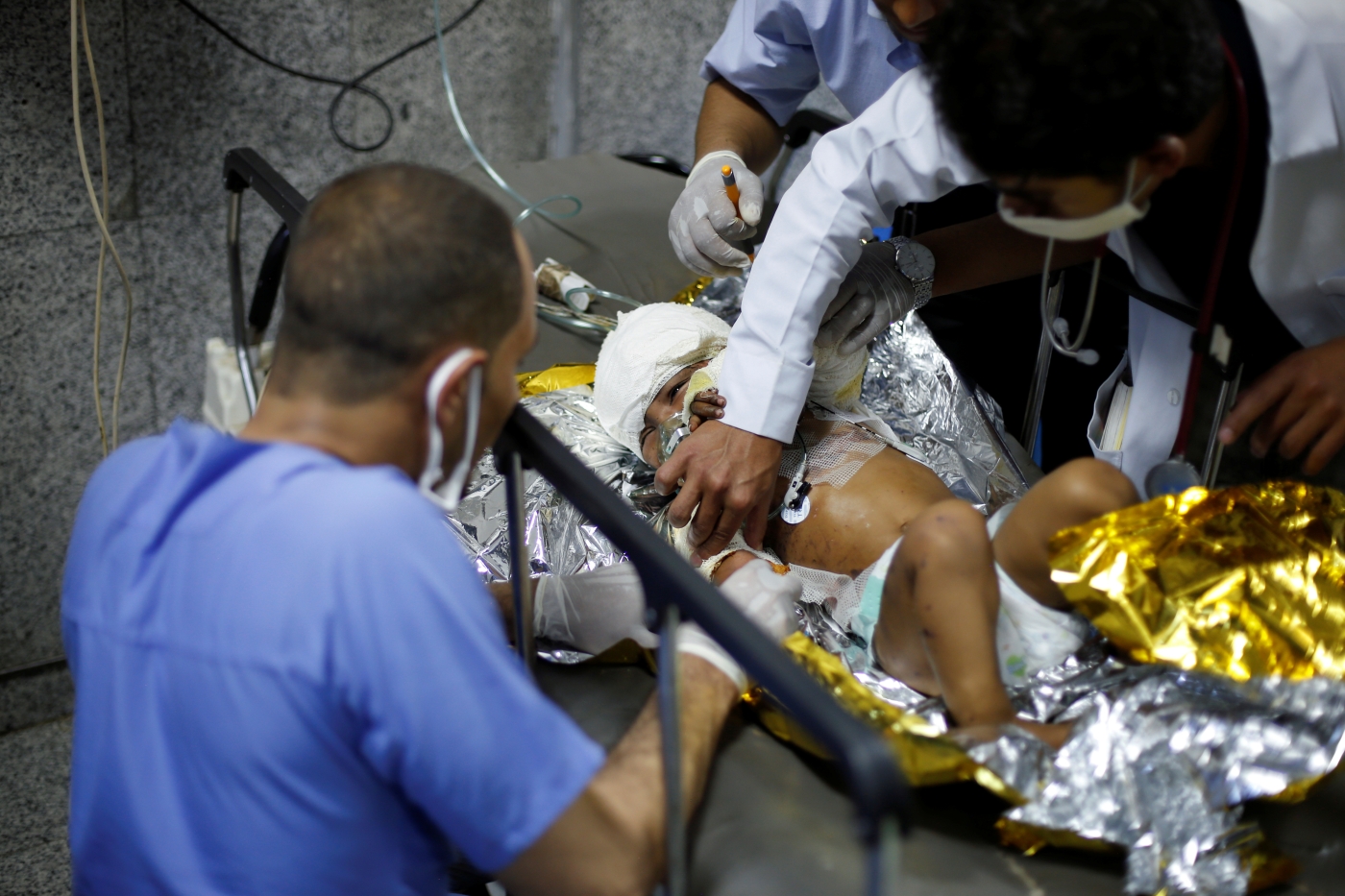 Medics attend to Furja Saleh Mabkhout, four, at a hospital in Sanaa to which she was rushed after she was injured in an air strike in the northern province of al-Jawf, Yemen 15 July 2020 (Reuters)
By
MEE correspondent
in
Sanaa

At least 25 people, including children, were reportedly killed in an air strike on a residential area in Yemen's northern Al-Jawf province, where a gathering for a circumcision party was underway, residents said.

The strike took place on the city of Al-Hazm, around 100km northeast of the capital Sanaa on Wednesday. It is the second deadly strike reported against civilian targets in Yemen since Sunday.

“The women of the village gathered inside Mohammed Mabkhout's house to celebrate the circumcision of [his] new baby,” local Ahmed Shway told Middle Easy Eye. “Children were playing outside the house and some people were drinking coffee in front of the house.”

While people were gathering inside and around the house, located in the Al-Masaafah area, an air strike hit the house, killing 25, including women and children, and wounding seven others, he said.

The Houthi rebels, who control most of the country's north, also said 25 people were killed in the air strike, however different numbers of victims have been reported. AFP quoted medical sources as saying that 12 people were killed.

"At least 12 people, including four women and five children, were accidentally killed in the city of Al-Hazm," about 100 kilometres northeast of the capital Sanaa, a government source told AFP.

Shway lost his brother and four cousins in the strike.

“Our area is safe and there are no military camps near to it. So no one expected that air strikes will target us," he said.

“We don’t have any sins, but we are Yemenis and no one cares about us. The whole world is seeing the Saudis kill us and no one moves to stop these massacres on Yemenis.”

Since 2015, Saudi Arabia has led an alliance of Arab countries in efforts to fight the Houthis in Yemen, who are supported by Iran.

Tens of thousands have been killed since then in what the United Nations has described as the world worst humanitarian crisis.

On Wednesday, the Norwegian Refugee Council said in a statement that "bombings by the Saudi-led coalition have reached an intensity not seen in two years and missiles fired by (the Houthis) into Saudi Arabia have also increased".

It said the UN should act and called for an "immediate independent investigation".

A statement from the pro-Houthi Human Rights Ministry accused the coalition of carrying out a "war crime" with the strike and also called for an "international committee to investigate into the direct crimes committed by the Saudi and UAE regimes against citizens in Yemen".

On Sunday, seven children and two women were killed in an air raid in the northwest province of Hajjah, according to the United Nations Office for the Coordination of Humanitarian Affairs (OCHA).

The following day, the Saudi-led coalition admitted there could have been civilian casualties during an operation in Hajjah and said there would be an investigation.

They also added that they had "intercepted and destroyed seven drones and four ballistic missiles" launched by the Houthis against civilians in Saudi Arabia.