Three brothers, the youngest just seven, know little of normal life for their age and are focused on earning money to survive 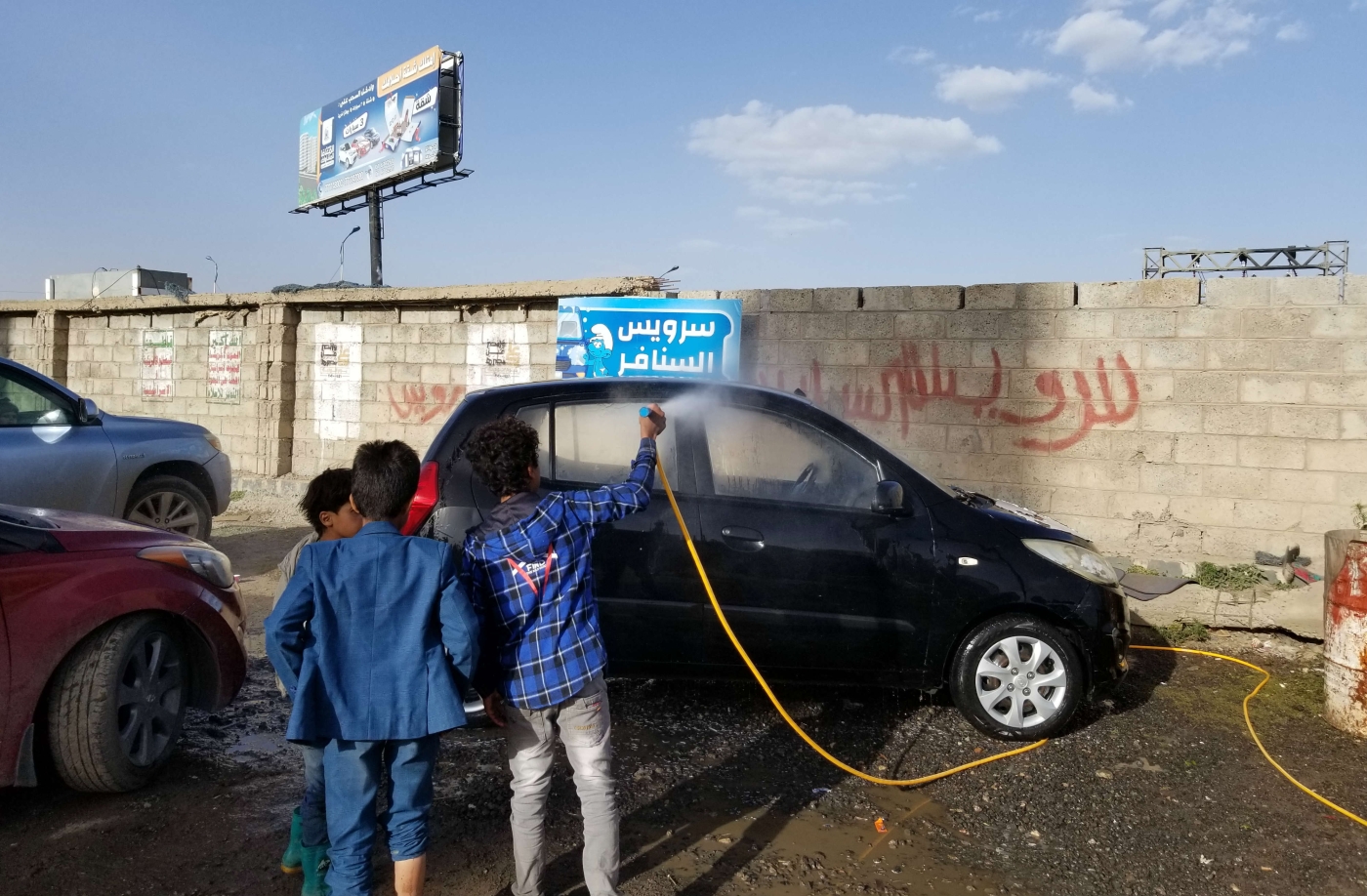 It is a Friday afternoon and three young brothers are washing cars outside.

For these skinny children, there is no school and there are no holidays. They started this business four months ago, and they work here washing cars every day from 8am until 6pm.

The boys are organised into a team: one washes the car, another wipes it and the youngest sweeps it. Their customers are men and women from across Yemen's capital, Sanaa. The eldest child is Mohammed, 14, next is Mukhtar, 10, and there is Khaldoon, just seven.

The boys know little of a normal childhood and are focused on earning enough money to survive. The only nod to a childhood is the name of their business. It's called the Smurfs Car Wash Centre.

Mohammed, the eldest brother, told Middle East Eye: "The situation is difficult nowadays, and my father alone can't provide for our family, so we decided to help him."

His father, Muhsen, works as a decorator but could not find enough business, so the children offered to work to help out.

"In the beginning we bought a wheelbarrow and started to carry food aid to people in the school, and then we went to work in the market," said Mohammed.

"We found this to be hard work for us, and then we see some friends work in a carwash centre, and they told us it is easier. We started to think about this work after that."

Working at the car wash

Mohammed and his brothers started to wash cars in the streets, and then they agreed that they needed to open a carwash centre themselves.

But some challenges faced them, such as what location to chose and how to get money to buy a generator, water tank and banner with the centre's name.

In the beginning, it was difficult for the brothers to find customers since they were children and no one knew them, but gradually they built up the customers and on good days can earn well.

"We paid back the debt, and we can earn a very good amount nowadays as we wash around 20 cars per day," said Mohammed.

'We have to work to help my father'

Children of the brothers' ages should be enjoying their childhood, studying and playing games in the park.

The three brothers said they used to study in the morning and work in the afternoon.

"We all study, but since Ramadan [May] there have been no classes, and we have been working here," Mohammed said. "We will go to study as soon as schools reopen."

The schools were closed because of the spread of the coronavirus, and Unicef said in July that following the move, 7.8 million children are currently unable to access education.

Even if the children have not given up on the idea of studying, they are no longer dreaming of becoming doctors, teachers or any job that needs qualifications. Instead, they've got their minds set on a larger carwash centre.

"If we stop work, there is no one to help us, so we have to work to help my father," said Mohammed.

"I hope to have a big carwash service in the future, and this one can be the beginning."

Working for 12 hours washing cars is hard work even for adults,  it is even harder for children, toiling under the harsh sun, so sometimes the brothers hire other children to help them.

"When there is a lot of work, we hire some friends to help us," Mohammed said. "There are many friends who come here every day looking for work with us."

Only a few metres from the carwash centre is the biggest park with games for children in Sanaa.

The brothers do not go to play there and only watch other children entering and leaving with their parents, with their luckiest moments being when the parents leave their cars for washing.

Now, some social activists have started to mention the children on social media, so the carwash centre has received more customers.

Sanaa resident Magdi Taha says he only washes his car at the Smurfs Centre to help encourage the three brothers to work.

"For me, I see many children begging in front of my eyes every day, others joining gangs and stealing or maybe fighting, so I can see this carwash centre as one of the best choices for children," Taha told MEE.

He said that he pays the children more than they deserve, arguing "work isn't shame for children," and that he hopes others can start their own similar projects.

"There are millions of children out of school, so it is difficult to say to these children they should return to school, as they are breadwinners for their family, so now we should encourage them with their safe project," said Taha.

Last year, even before the coronavirus, Unicef said that two million children were out of school in Yemen and another 3.7 million were at risk of dropping out.

"Children out of school face increased risks of all forms of exploitation, including being forced to join the fighting, child labour and early marriage," said Sara Beysolow Nyanti, Unicef representative in Yemen.

"They lose the opportunity to develop and grow in a caring and stimulating environment, ultimately becoming trapped in a life of poverty and hardship."

Jamila Abduldaem, who works on children's issues with civil society organisations, said that it was not right to encourage child labour by asking them to work and that people should help children stop working.

"Unfortunately, I see many people go to have their cars washed by the hands of children and that's a crime more than an encouragement, and those people are participating in increasing the numbers in child labour," she told MEE.

"The right encouragement is to help those children to go back to school and enjoy their childhood. This can be through providing them, or their families, with some money, or even advising them about the danger of child labour."

Abduldaem said there are many children who have started to establish their own projects to get more money, some of whom are not in need but did so because they believe people will feel sympathy for them.

"I'm afraid in this way people will encourage more children to leave school," she said.

"A good way of encouraging children is to provide students in public schools with food baskets for their families. There are many other ways to encourage children to study and enjoy their childhood, without encouraging child labour."