The Iran-aligned fighters continue their push to take control of Marib, which is home to at least a million displaced people Forces loyal to Yemen's Saudi-backed government sit in the back of a pick-up truck during clashes with Houthi rebel fighters west of Taiz, on 16 March 2021 (AFP)
By
MEE and agencies

Yemen's Houthi movement has said that the Saudi-led coalition must lift its blockade on the country before a ceasefire agreement can be agreed, as fighting intensifies in the north of Yemen.

In 2015, the Saudi-led coalition introduced an air and naval blockade to prevent the Houthis from smuggling weapons into Yemen.

Riyadh believes Iran has supplied the rebels with weapons to fight the coalition, which Tehran has denied.

'We were asked for a comprehensive ceasefire... but the first stage is to open the seaports and airports'

But the UN and human rights groups have said that the blockade has restricted the flow of aid and goods coming into Yemen, putting millions at risk of famine.

"The humanitarian side must be separated from the military one," Ansar Allah (Houthi) spokesman Mohammed Abdulsalam said in an interview broadcast on Al Jazeera on Wednesday.

"We were asked for a comprehensive ceasefire... but the first stage is to open the seaports and airports, then go towards the process of a strategic ceasefire, which is stopping the strikes, missiles and drones. When the seaport and the airport are open, we're ready to negotiate."

In March, the UN repeated calls for a nationwide ceasefire and a political solution to the ongoing conflict.

Abdusalam reiterated the Houthi plea for the blockade to be lifted before a ceasefire and then "preparations for discussions and then have a dialogue."

Washington, meanwhile, has renewed its push to end the conflict and withdrawn its support for the Saudi-led coalition's campaign in Yemen, with sources telling AFP that US envoy Tim Lenderking met face-to-face with the Houthis in February. The Houthis have denied holding "direct meetings" with US officials, but Abdusalam said the group "have no problem" meeting the Americans.

He added that the movement had "channels of communications with Saudi Arabia but frequencies increase and weaken depending on the political and military solutions."

Houthi calls for the lifting of the blockade, which has helped cripple the country, come as the Iranian-allied group pushes to take control of the government stronghold of Marib - the capital of an oil-rich region that hosts at least a million displaced people.

Years of fighting have led to more than 230,000 deaths, according to the UN, mostly civilians dying from hunger and disease, and millions of Yemenis being pushed to the brink of famine. 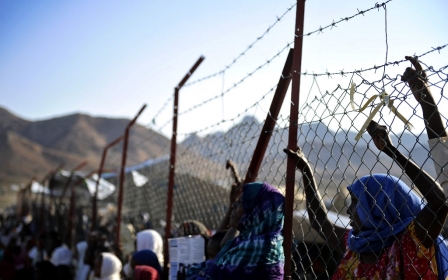