At least 30 soldiers reported killed in attack loyalist sources blame on rebel Houthis, at al-Anad air base in Lahij province 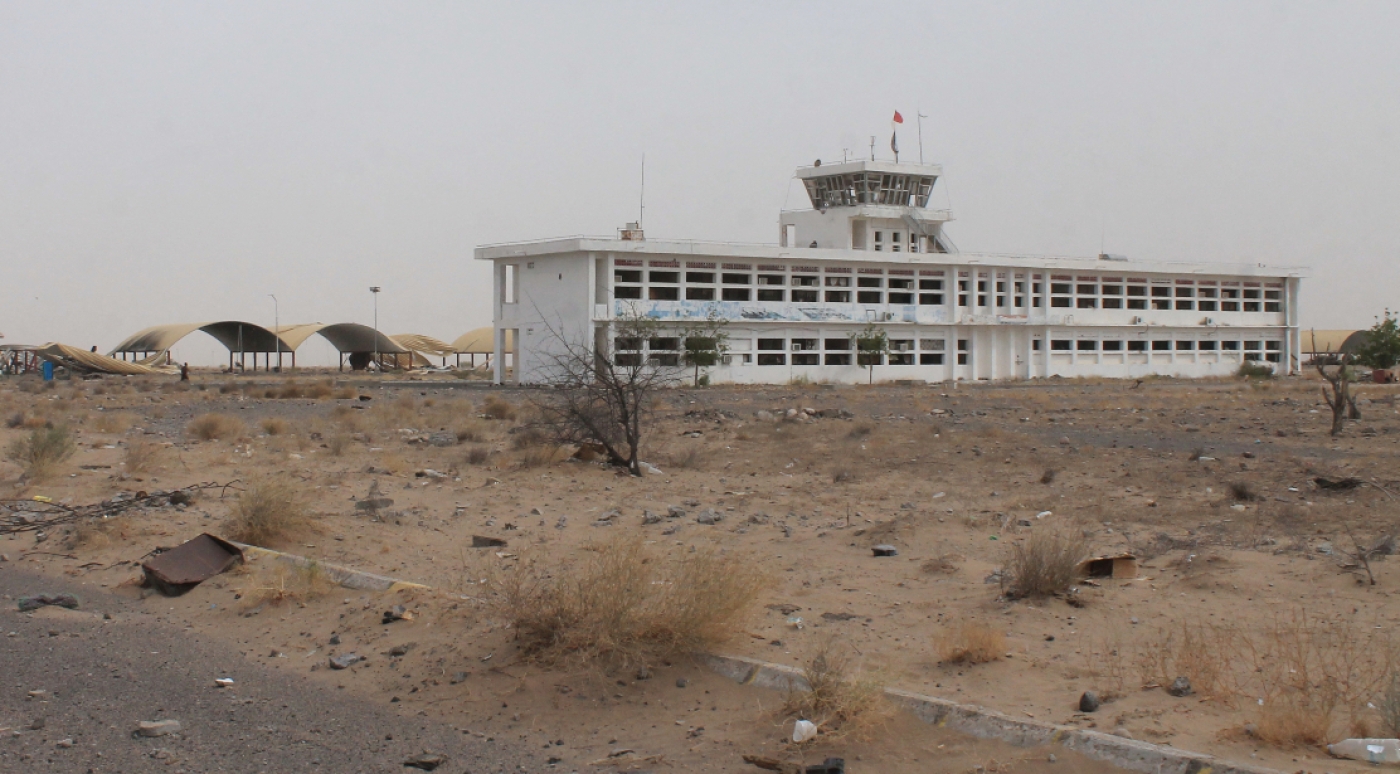 Al-Anad, some 60km north of Aden, was once the headquarters for US troops overseeing a long-running drone war against al-Qaeda (AFP/File)
By
MEE and agencies

Strikes on Yemen's largest air base on Sunday killed at least 30 pro-government soldiers and injured scores more, according to Mohamed al-Naqeeb, a spokesman for the southern forces, in a suspected Houthi attack.

Two medical sources said several bodies had arrived at Lahj province's main hospital along with another 16 wounded people following the attack on al-Anad air base, which is held by pro-government forces.

Video footage from the scene showed dozens of people gathered in front of the hospital, where one ambulance after another was pulling up to drop off casualties.

"We have called on the entire staff, surgeons and nurses, to come in," Mohsen Murshid, an official from the hospital, told AFP. "We also know that there are still bodies under the rubble".

It was unclear if civilians were among the casualties.

Yemeni President Abd Rabbuh Mansour Hadi expressed condolences for the dead and vowed that the "Houthis will pay heavily for all the crimes they have committed against the people of Yemen", the state news agency Saba reported.

MEE's correspondent in Yemen said the base that was hit was located near front lines and that southern forces had said it lacked air defences and was not considered a safe place. 'Our children are fuel for war': Village sons leave Yemen countryside for the battlefield
Read More »

Naqeeb said that between 30 to 40 soldiers were killed and at least 60 wounded, adding that the death toll might still rise as rescuers were still clearing the scene.

There was no immediate comment from the rebel side.

The internationally recognised government, which is backed by a Saudi Arabia-led military coalition, and the Houthis have been locked in war since 2014, when the rebels seized the capital, Sanaa.

The southern forces are part of the Saudi-led coalition.

A local pro-government official, who spoke on condition of anonymity, also confirmed fatalities.

Residents said that several loud blasts were heard in the al-Anad area, which is about 70km north of the southern port city of Aden.

Several other residents from the disputed central city of Taiz said they had heard ballistic missiles fired from launchers positioned in the Houthi-held eastern suburbs of the city.

In 2019, the Houthis launched a drone strike on al-Anad during a military parade, with medics and government sources saying at the time at least six loyalists were killed, including a high-ranking intelligence official.

Al-Anad was the headquarters for US troops overseeing a long-running drone war against al-Qaeda until March 2014, when it was overrun by the Houthi rebels.

It was recaptured by pro-government forces in 2015 who recovered territory from the rebels across the south with support from the Saudi-led coalition.

Sunday's incident is one of the deadliest since December 2020, when blasts targeting cabinet members rocked Aden airport.

At the time, at least 26 people, including three members of the International Committee of the Red Cross and a journalist, were killed and scores wounded in the explosions as ministers disembarked from an aircraft in the southern city.

While the UN is pushing for an end to the war, the Houthis have demanded the reopening of Sanaa airport, closed under a Saudi blockade since 2016, before any ceasefire or negotiations.

The incoming UN special envoy for Yemen, Hans Grundberg, will officially assume his duties on 5 September. Yemen War
‘Our children are fuel for war’: Village sons leave Yemen countryside for the battlefield