Yemen's Houthis used ballistic missiles and drones in an attack on Saudi Arabia's capital Riyadh on Tuesday, targeting the defence and intelligence ministry, and a military base, the movement's military spokesman said in a televised speech.

The Saudi-led coalition battling the group for five years said earlier that it had intercepted a ballistic missile fired by the Houthis towards Riyadh.

"A large number of winged ballistic missiles and drones targeted the capital of the Saudi enemy... pounding military headquarters and centres including the defence and intelligence ministry and [King] Salman Air Base," said Houthi military spokesman Yahya Sarea. He said attacks were also launched against military sites in the southern Saudi cities of Najran and Jizan that border Yemen.

There was no immediate confirmation by the coalition or Saudi authorities that any of the places in the Saudi capital had been targeted.

Earlier, the Houthis' Al Masirah television said the rebels had carried out a "large-scale attack" deep inside Saudi Arabia, without elaborating.

A Reuters witness in the capital heard two loud blasts and saw billows of smoke in the sky over Riyadh close to dawn. There were no immediate reports of damage or casualties.

"I condemn these latest attacks on Saudi Arabia by the Houthis, and their continued offensives within Yemen which cast further doubt on their claims to want peace," British Foreign Secretary Dominic Raab said in a statement.

"With over a million Yemenis believed to have contracted coronavirus, it is more vital than ever that the Houthis cease their hostilities and allow the UN-led humanitarian response to get on with saving Yemeni lives."

While Yemen has already been branded the world's worst humanitarian crisis, aid agencies have warned that a severe outbreak of coronavirus could end up compounding the problem even further.

A survey by 24 international aid groups, including Save the Children, has warned that around 5.5 million people face losing access to food and clean water in Yemen this year.

Violence between the two sides has surged after the expiry last month of a six-week ceasefire prompted by the coronavirus pandemic, with the Saudi coalition launching air strikes that have killed civilians, and Houthis launching missiles and drones towards Saudi Arabia.

Coalition spokesman Turki al-Malki said its forces had intercepted and destroyed a Houthi missile launched at Riyadh in a "deliberate hostile action designed to target civilians".

In a statement on Saudi state news agency SPA, Malki said the coalition had intercepted on Tuesday three Houthi missiles fired towards Najran and Jizan, as well as several armed drones launched towards the kingdom late on Monday.

The coalition intervened in Yemen in March 2015 after the Houthis ousted the Saudi-backed government from the capital, Sanaa, in late 2014.

All parties in the war have been accused of human rights violations, including enforced disappearances, targeting civilians and detaining journalists. 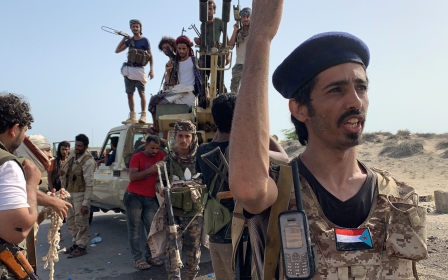