Islahi leaders are nervous that their patron Riyadh has turned its back on them, which may push more into the arms of the Houthis 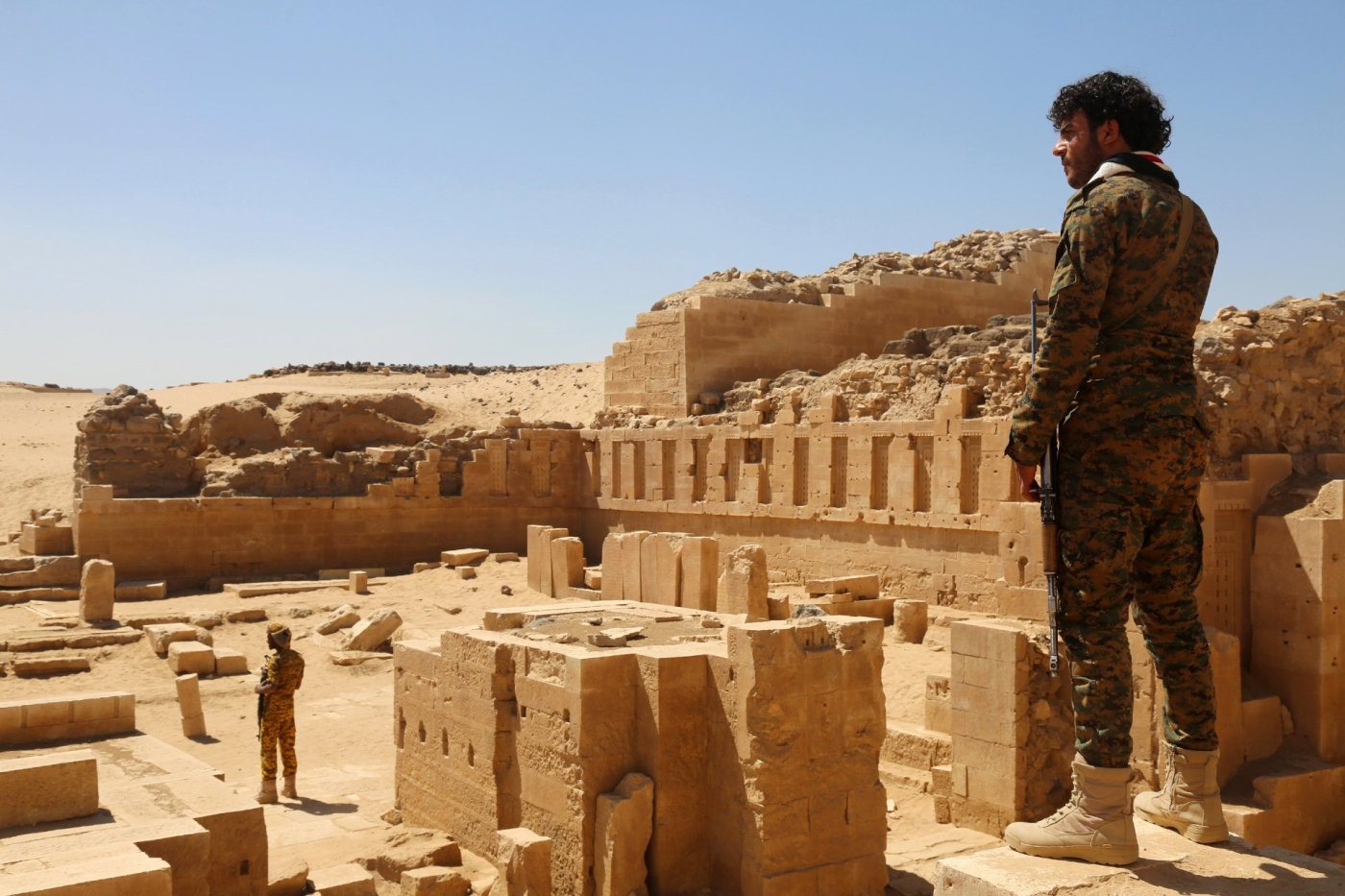 Yemeni tribesmen from forces loyal to the Yemeni government walk around the Awwam Temple area in the province of Marib, where Islahis and Saudis have been fighting together (AFP)
By
MEE correspondent
in
Taiz, Yemen

The unlikely alliance between Saudi Arabia and Yemen’s Islah party has come under strain like never before, as fresh moves by Riyadh targeting the Muslim Brotherhood have left its Yemeni affiliate fearful of its status.

Saudi Arabia and the United Arab Emirates have long opposed the Brotherhood, labelling the Islamist group a terrorist organisation in 2014.

Yet the Saudis have for decades found a partner in Islah, whose status as a client of Riyadh only grew following the 2015 Saudi-led intervention into Yemen’s war.

As Saudi Arabia provided weapons to Islah fighters battling the Iran-aligned Houthi movement, and even deployed its troops alongside Islahis, Riyadh refrained from hostile speech and moves against the Brotherhood.

That changed last week, when Saudi Arabia’s Council of Senior Scholars issued a statement calling the Muslim Brotherhood a terrorist organisation, which sent Islah officials in the kingdom scrambling.

“The Muslim Brotherhood Group is a terrorist group and [does not] represent the method of Islam, rather it blindly follows its partisan objectives that are running contrary to the guidance of our graceful religion, while taking religion as a mask to disguise its purposes in order to practice the opposite such as sedition, wreaking havoc, committing violence and terrorism,” the council said.

This is the first official statement by Saudi Arabia against the Brotherhood since 2014 and has left Islah exposed.

Saudi ally the UAE has targeted Islah several times during the war, despite the two ostensibly being on the same side of the conflict. The UAE employed US mercenaries to kill Islah leaders, and its local proxies have clashed with Islah’s fighters.

Riyadh’s patronage has always previously stopped hostilities getting out of hand.

Karman tweeted on 10 November: “To the council of senior hypocrites for bin Salman and his shoe polishers: The Muslim Brotherhood members in Saudi Arabia are struggling for the sake of freedom and bin Salman’s regime suppresses freedoms of all sides, either Muslim Brotherhood or others.

“Bin Salman’s prisons are full of those who say ‘No’ and those who are expected to say ‘No’,” she added. “Saudi Arabia is the mother and father of terrorism."

Many Islah officials live in Saudi Arabia, often working in Hadi’s government and presidency, which has operated from the kingdom since the war began.

No official statement has been issued in response, but Islah members in Yemen now believe their alliance with the Saudis is over.

“The Emirates has been fighting us since early 2017 and it supported the Southern Transitional Council (STC) to fight the army in the south, but Saudi Arabia used to be neutral,” an Islahi member told Middle East Eye, speaking on condition of anonymity.

“Saudi Arabia intervened more than once to solve the dispute between the STC and Hadi-backed forces from Islah, and we accepted all agreements as Saudi used to be neutral.”

The source said the party has often felt let down by Saudi Arabia, but never expected to begin being labelled as terrorists while the kingdom hosted Islahi leaders and fought alongside the party.

“Before 2015, Saudi Arabia accused the Muslim Brotherhood of terrorism and the relationship wasn’t good, but in 2015 a new alliance was started and Islahi fighters were fighting in Yemen together with Saudi fighters,” the Islahi member said.

According to the source, Saudi Arabia tried to force Islah into allying with the UAE and following its orders, but “Islahi members are loyal to the country and not to any other country”.

The member said the accusations of terrorism are baseless, but have now changed the dynamic between the party and the coalition - though stressed this does not mean Islah will join the Houthis’ ranks instead.

“In Yemen, I think the Islah party knew very well that Saudi Arabia is against them even before this accusation,” he said, pointing to weak support for Yemeni government forces when clashes between Hadi’s forces and UAE-backed southern separatists have broken out before.

The UAE and Muslim Brotherhood are locked in an international battle spanning Egypt, Libya and elsewhere, Ali noted, adding that Islah has now been drawn in and faces a difficult period ahead.

Mustafa al-Yafie, a supporter of Saudi Arabia who has previously fought for the UAE-backed Southern Transitional Council, said Riyadh did not come to this decision overnight, but has been years in the making.

“This accusation was against the Muslim Brotherhood in general and not only in Yemen, and we aren’t going to tell Saudi Arabia what to do and what not to do,” Yafie told MEE.

“We should be logical in our thoughts. That was an accusation by another country and we should respect it as this country helps us a lot and we also have bad experience with the Muslim Brotherhood in Yemen.”

He accused Islah of not accepting the views and beliefs of other people, and said Yemen would be damaged if they controlled it.

“For me personally, I agree with the accusation by Saudi Arabia’s Council of Senior Scholars, as the Muslim Brotherhood’s members blindly follow their partisan objectives."

Five years ago, Hadi’s forces were united, fighting shoulder to shoulder against the Houthis in Aden, Taiz and other provinces. Today, fractures are growing all the time, with new quarrels and groups emerging.

In July 2020, Islahi leader Sheikh Mohammed Ali al-Khuzaie took the dramatic step of leaving Marib and joining the Houthis in Sanaa, stating that there are many military and political Islahi leaders like him who want to do the same.

'Islah doesn’t want to say in public that Saudi Arabia is an enemy because there are some Islahi leaders in Saudi Arabia, but they believe it is a main enemy'

“This step came after the disappointment of the Saudi-Emirati coalition and after we realized the purpose they are fighting for,” he said in a meeting with the Houthi leader Mohammed al-Bukhaiti.

Khuzaie said some Islahi leaders describe the Houthis as “the defenders of the sovereignty and independence of Yemen”.

It was a dramatic intervention from a military leader whose exploits fighting the Houthis in Hadi’s al-Soqoor brigade in Marib were well known. Khuzaie had fought personally alongside Saudi fighters, and later in July Islahi military leaders in other provinces defected to Sanaa as well.

Ali, the journalist, said Saudi aggression will only push Islah and the Houthis closer together.

“Islah doesn’t want to say in public that Saudi Arabia is an enemy because there are some Islahi leaders in Saudi Arabia, but they believe it is a main enemy,” Ali said.

“I think the best solution now is for the warring sides to go towards a national reconciliation to reach a peaceful solution to the ongoing war, as it is the only solution.” 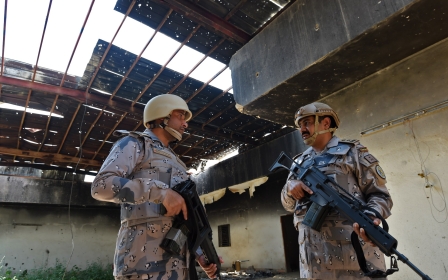 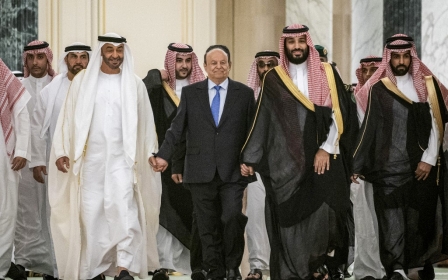