In a letter to the president, 41 members of Congress say they support Biden's decision to end support for Saudi coalition, but ask for clarification on what that entails The conflict has killed nearly 250,000 people, caused outbreaks of preventable diseases and brought Yemen to the verge of famine (AFP)
By
MEE staff
in
Washington

Dozens of Democratic lawmakers sent a letter to US President Joe Biden on Thursday asking for further clarification on the recent announcement that Washington would end support for "offensive" operations by the Saudi Arabia-led military coalition in Yemen.

The letter, which expressed support for Biden's decision, asked the administration what forms of "military, intelligence, [and] logistical" support constitutes as "offensive" activities and what forms of support will continue under the president.

Earlier this month, Biden said the US would end support for the Saudi-led coalition in Yemen. "This war has to end. And to underscore our commitment, we're ending all American support for offensive operations in the war in Yemen, including relevant arm sales," he said in his first major foreign policy speech.

He added, however, that the US would "continue to support and help Saudi Arabia defend its sovereignty and its territorial integrity".

While many Democrats in Congress applauded the move, questions remain regarding the details of the decision, such as what constitutes an offensive operation versus a defensive one, and what weapons systems would fall under those categories.

"You have said that the United States will 'continue to support and help Saudi Arabia defend its sovereignty and its territorial integrity and its people' from 'threats from Iranian-supplied forces in multiple countries'," the letter, which was signed by 41 members of Congress, said.

"What activities does this policy entail, and under what legal authority is the Administration authorized to engage in such activities?"

The Intercept first reported on the letter early on Thursday. It was spearheaded by Congressmen Peter DeFazio and Ro Khanna, and Congresswoman Debbie Dingell.

'No wiggle room for the Saudis'

Saudi Arabia has led a coalition with regional allies, namely the United Arab Emirates, in Yemen since 2015 against the country's Houthi rebels to restore the government of President Abd Rabbuh Mansour Hadi.

Riyadh sees the Houthis as Iranian proxies, but the rebels deny receiving material support from Tehran.

The conflict has killed nearly 250,000 people, caused outbreaks of preventable diseases and brought the already impoverished country to the verge of famine.

Last month, the Biden administration issued a temporary freeze on some Trump-era weapons sales to Saudi Arabia, as it started a review of arms deals with Riyadh and the UAE. The review included the sale of precision-guided munitions to Saudi Arabia and F-35 fighter jets to the UAE, according to the Wall Street Journal.

Khanna and DeFazio said the letter was an attempt to establish formal communication between the administration and Congress about its policy.

"My understanding is that the ban on any US participation in Saudi military strikes applies very broadly to any Saudi bombing or missile strikes into Yemen," Khanna told The Intercept.

"There is no wiggle room for the Saudis to claim they’re attacking a place in Yemen out of self-defense. That is my understanding of how the administration intends the directive." 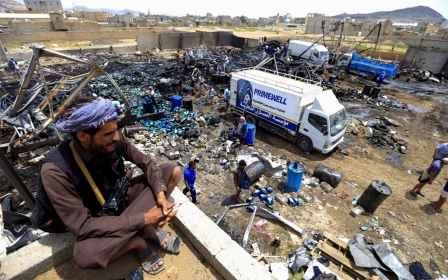