Nearly half a million children have dropped out of school since the war began, with many forced to work for less than a dollar a day 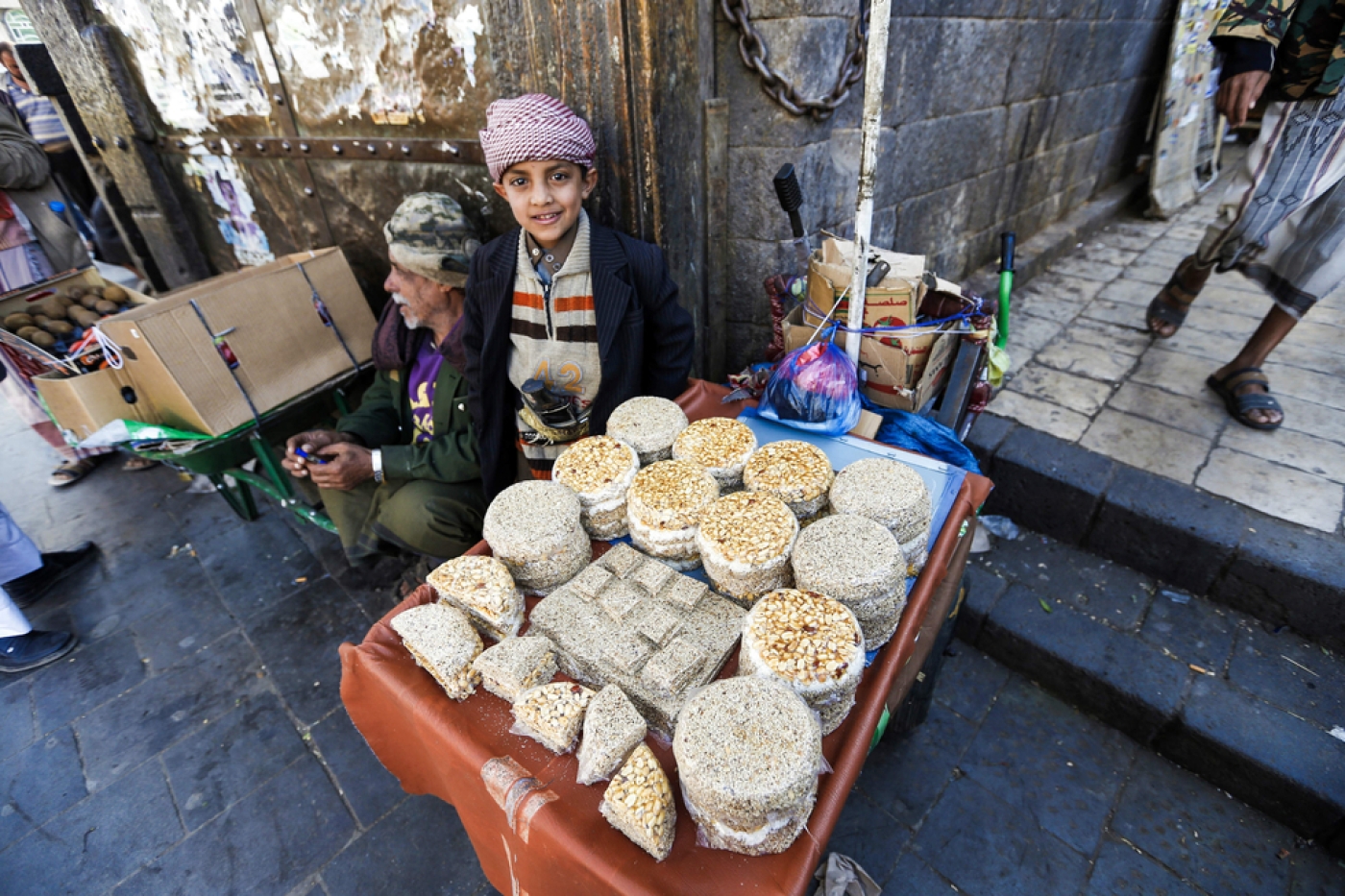 UNICEF says the conflict and economic catastrophe has depleted most families' financial resources, so child marriage and child labour are increasing (AFP)
By
MEE correspondent

TAIZ, Yemen - Like any 12-year-old, Mohammed Ghlaib gets up in the morning and prepares for school.

His day, however, starts much earlier. And instead of taking his lunch as he leaves the house, Mohammed grabs a bucket full of Yemeni fawfal sweets.

They aren't for him.

I do not want to see my children work in the school where they are supposed to be taught sciences, but dire need has forced me to ask them to work

Every day Mohammed sells sweets to students before studying. If he didn't, his family might not have enough money to eat.

Mohammed lives with seven of his relatives in Thobhan, 70km from Taiz city.

Though several humanitarian organisations work from Taiz, none help Mohammed and his family.

"I want to study regularly, but it is difficult because I need to sell my items before noon," he told Middle East Eye. "If I study regularly, my family will not get enough money to buy food."

'I envy my friends who can study'

Mohammed's father, Tawfeeq, is unemployed, so to eke out a living he has resorted to selling boiled potato sandwiches with Mohammed and another son in the same school.

Mohammed used to study there, but over the past year he became worried about his family's struggle to survive, so he interrupted his studies to give a helping hand.

"I am still struggling to complete my studies, and I attend some classes, so if my father finds work I can resume studying," the young boy said.

Mohammed has been selling fawfal and sometimes some other food in the school for two years, and his classmates have encouraged him by buying his sweets.

"My friends buy sweets from me every day, and I am happy that usually I sell the whole quantity of fawfal. But in fact I envy my friends, who can study and do not have to work like me," he said.

Mohammed said he earns around YR500 per day, less than a dollar, around the same as his father and brother selling sandwiches

Tawfeeq told MEE: "I do not want to see my children work in the school where they are supposed to be taught sciences, but dire need has forced me to ask them to work.

"All members of the family are working, and if one of us does not work we will not get food to eat," he adds.

According to Tawfeeq, his wife and daughters prepare the fawfal, sandwiches and juice, and the sons sell them in the school with their father.

Less than a dollar a day

Walid Abdullah Ahmed, also 12, is a brother of eight siblings.

He and his family live inside al-Fajr school, south of Taiz, half of which has been turned into a camp for Yemenis displaced by the war.

Walid used to go to school in Taiz city, but when the battles arrived at his neighbourhood, his family fled to al-Fajr school, and ever since he's been studying in the half still being used for its intended purpose.

Last year, however, Walid's father Abdullah became infected in his spine and couldn't work as a labourer in the market any more. Walid had to stop his studies and now works in a small shop in the school.

"To help my family with food is more important than studying. I cannot study if my siblings are hungry and my father doesn't have medicine," he told MEE.

Three of Walid's brothers are also working to help the family, and are found in different jobs in the market, cleaning cars and carrying goods.

Like Mohammed, Walid earns less than a dollar a day. This is better than nothing, he said.

Abdullah hopes to see his children return to their studies. He’s not optimistic, though, because food is the priority.

"I am a sick man and I cannot carry anything because of my spine, so I am pessimistic about the future of my children," he told MEE.

"I feel that my children will suffer in future like me because they did not receive a proper education."

Abdullah is illiterate, so has only been able to find work as a labourer in the markets.

Since a Saudi-led coalition escalated Yemen’s war in 2015, nearly half a million children have dropped out of school, according to UNICEF, the United Nations children’s agency.

That has brought the total of out-of-school children up to two million.

According to UNICEF, the conflict and economic catastrophe in Yemen has depleted most families’ financial resources, so child marriage and child labour are increasing.

The UN estimates that 22 million Yemenis need some form of humanitarian assistance, and the war has pushed as many as 14 million to the brink of famine.

The International Labour Organisation said in 2013 that more than 1.3 million children in Yemen are working, including 469,000 in the 5-11 age group.

According to Jamal al-Shami, the founder of the Democracy School, a local NGO based in the capital Sanaa, the number of child labourers has doubled during the last three years of the war but there is no new specific figure.

"During the war, more children became breadwinners of families as their breadwinners lost their jobs, and most of the child labourers are in the rural areas," Shami told MEE.

He said that children work in several kind of jobs, like selling items in the markets, working in factories, building and porters. Most work in agriculture in rural areas.

"You can find children working anywhere, and even in the battles you can find them fighting for money," Shami added. "Children are the weakest victims in this war."

According to UNICEF, at least 2,419 children have been recruited in the fighting since March 2015.

UNICEF, with the cooperation of the Ministry of Social Affairs, has set up "child-friendly spaces" in several provinces to help shelter them from the conflict.

I dream of being an architect, so I hope to spend my time just studying and enjoying reading with my friends in the afternoon

Aseel Abubakr, a social worker in one of those spaces in Taiz, said the initiatives help educate the children and assist some families by occasionally providing food.

"We do our best to fight child labour by teaching child labourers about the dangerous effects of this problem, and we educate society not to exploit children," Abubakr told MEE.

"Sometimes we send the needy child labourers to specialised people to provide their families with basic items, so children can stop working."

Mohammed, the child sweet-seller, said he hopes to find someone to help his family so he can focus only on studying.

"I dream of being an architect, so I hope to spend my time just studying and enjoying reading with my friends in the afternoon,” he said.

"If my family has enough food and basic commodities, I will definitely stop working." 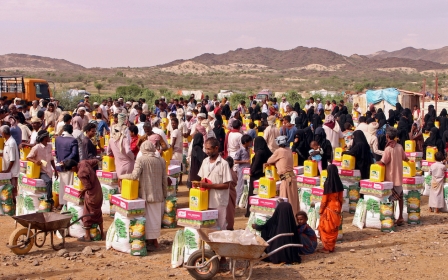 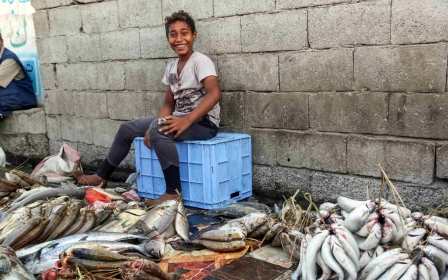 Yemen War
As Hodeidah's ceasefire holds, life begins to trickle back into the city 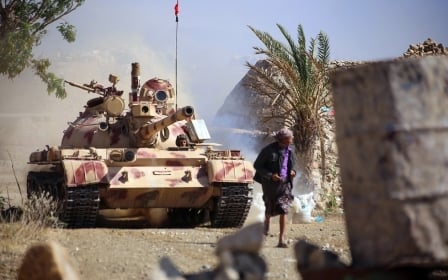