Yemen's President Abd Rabbuh Mansour Hadi has condemned the Houthis as “stooges of Iran” and called for Yemenis to continue to agitate against them.

Speaking at a meeting of the Arab League in Sharm el-Sheikh in Egypt on Saturday, Hadi called on all Yemenis to “continue to back and support the legitimate authority of Yemen” and maintain “peaceful demonstrations”.

He thanked the “honorouble men” who had enabled him to escape from the southern Yemeni city of Aden - where he was holed up after fleeing the capital Sanaa - and travel briefly to neighbouring Oman before moving onto Saudi Arabia.

He also insisted that the Saudi Arabia-led coalition carrying out airstrikes in the country must continue their campaign until the Houthis “surrender”.

Hadi's foreign minister told reporters that the embattled president would be travelling with the Saudi King Salman to Riyadh on Saturday and would not be returning to Yemen until the situation "settles".

His speech comes as local sources in Yemen report that 54 have so far been killed in three days of Saudi-led bombardment of Yemen.

"It was an intense night of bombing and the windows shook," said one aid worker on Saturday, speaking to AFP.

"People want to leave but there are no flights out of Yemen," she said.

In addition, an explosion at an arms depot rocked Aden on Saturday, with local media reporting at least 10 killed.

The cause of the explosion has yet to be confirmed, though Yemen analysts on Twitter speculated that it could be linked to looting at the depot.

Saudi Arabia, with political backing of the US, arranged the coalition of Sunni Arab states on Wednesday after concern over the Houthis advance on Aden.

The Saudis, who with 100 fighter jets make up the largest contingent in the anti-Houthi coalition, have been increasingly worried about the possibility of an Iranian-backed power being established on its southern border.

Iran has publicly supported the Houthis and on Thursday condemned the airstrikes as a violation of Yemen's sovereignty.

Other Arab leaders at the Sharm al-Sheikh summit also condemned what they percieve as Iranian expansion in the region with Egyptian President Abdel Fattah al-Sisi referring to it "spreading its ailment in the body" without mentioning Iran by name.

DebkaFile, a website said to be close to Israeli military intelligence, reported on Saturday that Iranian General Qassem Suleimani – currently heavily involved in aiding the Iraqi government in the fight against the Islamic State group – was in Yemen providing expertise to the Houthis.

On Saturday, Hassan Nasrallah, the secretary-general of Lebanese Shiite movement Hezbollah – who also receives political and economic support from Iran – condemned the bombings in Yemen as “illegal.”

“The outcome of this war is clear: Saudi Arabia will be defeated and the Yemeni people will have an undeniable victory,” Nasrallah said in a televised speech.

“Saudi leaders have one last chance before they are defeated and humiliated, and that is to behave with the Yemenis like brothers and to begin a dialogue while the door is still open.”

Speaking in Sharm al-Sheikh on Saturday, UN secretary-general Ban Ki-Moon stressed the need for dialogue and negotiations and called for “clear guidelines to peacefully resolve the crisis”.

Yemen has been in a state of unrest since 2011 when demonstrations began against the autocratic rule of former President Ali Abdulleh Saleh, eventually leading to him stepping down.

Though Hadi was installed shortly afterwards in a one-candidate election, with the purpose of beginning negotiations towards the establishment of a democray within the country, the power vacuum allowed the Houthi movement to expand across the country.

They took control of the capital Sanaa in September 2014, which, after failed attempts to negotiate a final settlement between different political actors in the country, eventually led to Hadi's resignation and his flight to Aden.

Another concern for the international community has been the growth of al-Qaeda in the Arabian Peninsula (AQAP) and, in recent weeks, the Islamic State group, which are alleged to have established a presence in Yemen following the deadly bombing of a mosque in Sanaa last week.

While both groups are hostile to the Houthis and Saudi Arabia (as well as each other) they have yet to establish a clear position on the Saudi-led airstrikes. 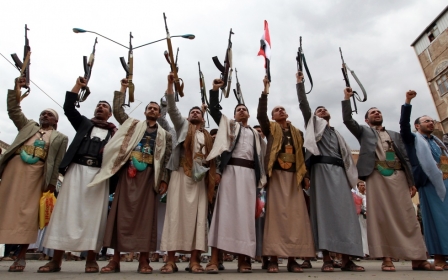