Over half of Israa Jaabis's body was burned just before her imprisonment in 2015. She says she has struggled to receive adequate healthcare since 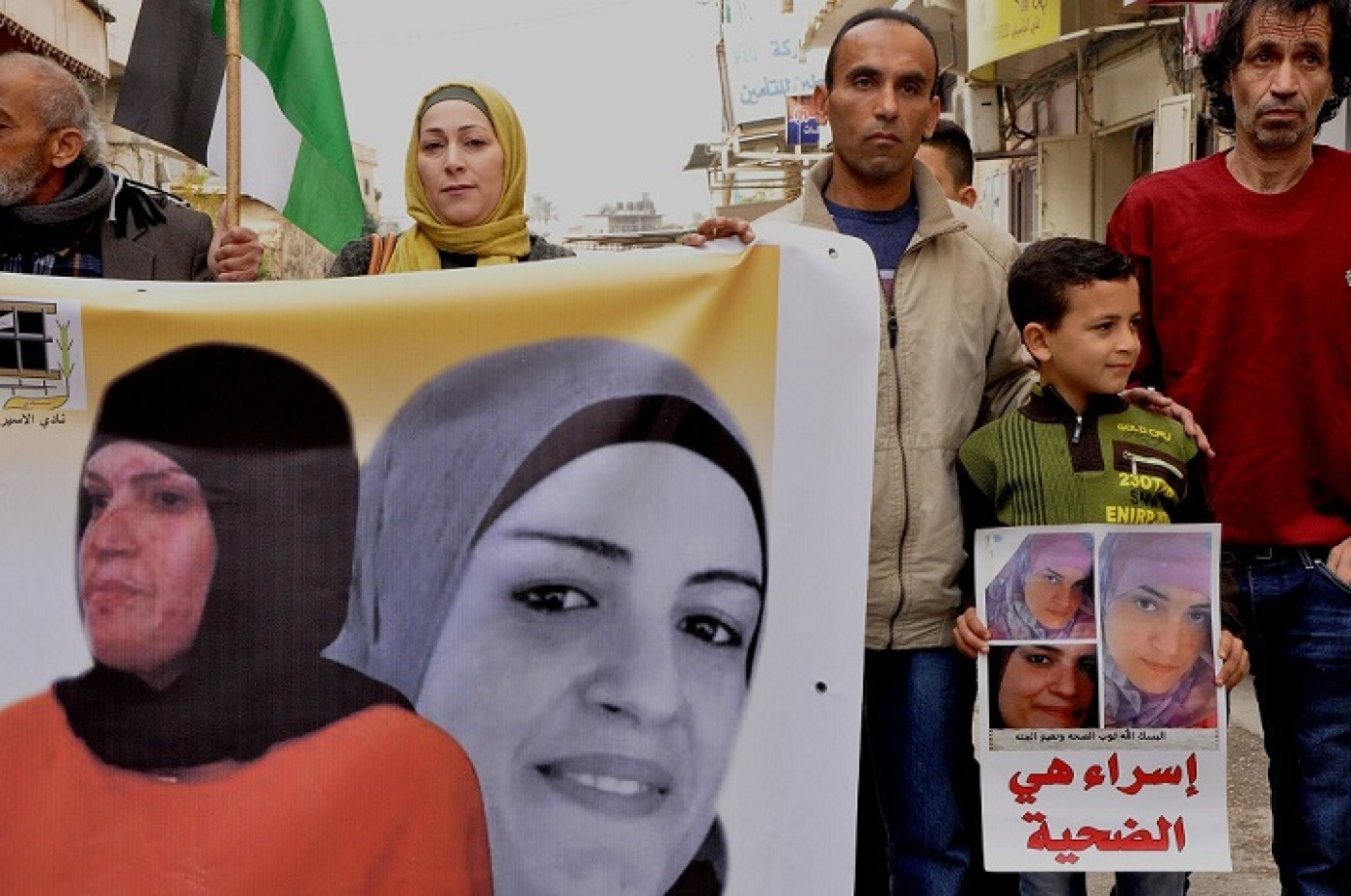 Jaabis's son and others protest for her release this week in front of Red Cross offices in Jericho (Muna Jaabis/Facebook)
By
Lubna Masarwa
, Dania Akkad

The supporters of a jailed Palestinian woman who requires urgent medical care say that Israeli prison authorities have neglected her over the past two years and are calling for her immediate release.

The campaign for Israa Jaabis, which has made headlines in Palestinian media this week, comes as she and her lawyer have asked Israel’s high court to reduce her 11-year prison sentence. A decision is expected within days.

'I have been here for two years and I don’t receive the medical treatment that I need. I don’t see any reason or excuse why I am here in prison'

- Israa Jaabis in an Israeli court this week

“I have been here for two years and I don’t receive the medical treatment that I need,” Jaabis was filmed telling the court on Thursday. “I don’t see any reason or excuse why I am here in prison.”

“Physically, Israa’s situation is very difficult and she is also in a very difficult psychological situation,” her lawyer, Lea Tsemel, told Middle East Eye after the hearing.

Jaabis, 32, was arrested in October 2015 and is accused of attempting to detonate a bomb in order to harm Israeli soldiers in front of an East Jerusalem checkpoint.

But she and her family have said that she was in the process of moving house to retain her Jerusalem residency when a faulty cylinder of cooking gas burst into flames 500 metres from the checkpoint.

Jaabis, who has a 10-year-old son, was severely injured in the blaze, with 65 percent of her body burned, including major wounds on her face and hands. After she was arrested, she was taken to Hadassah Medical Centre where eight of her fingers were amputated.

But before her treatment was completed, her family said, she was taken to HaSharon Prison. Since then, she has struggled to receive adequate treatment and has been living with pain ever since.

Injuries to her ears have resulted in repeated infections and have made it difficult for her to hear. The inside of her nose was burned, so she breaths through a very small opening. She is unable to raise one of her arms and has spasms in her hands and feet.

"I cannot put burn dressing [on] as I find it hard to put it [on] myself,” she is quoted as saying in a letter she sent to her sister and lawyer that is being distributed on social media as part of the campaign to free her.

“I have dry eyes and I feel severe pain whenever I'm exposed to air or whenever I wash my eyes with water. My eyes need urgent treatment but no one listens.”

Jaabis will require ongoing medical aid and surgery to be able to do very basic things, her sister, Muna, said. "She is suffering all the time from severe pain and nightmares at night," she said. "Her teeth are falling out."

Israa's family has offered to pay for her treatment, but Muna said Israeli prison authorities have refused their offer.

"It's not only that she was accused of something she didn't do and that they have no proof," Muna said. "In addition to this, they left her without basic rights like medical treatment."

Middle East Eye called the Israeli prison service for comment on Friday and were told to call back on Sunday to speak to someone specifically about Israa's case.

“They have to push all the time, repeating their calls for medical treatment,” said Niv Michaeli, prisoner and detainees coordinator at PHR-I. “It takes a lot of time to get their services and the quality is very low.”

'The Israeli prison services has no standard of medical care...  it does not collect statistics regularly regarding the illnesses or the healthcare needs of prisoners'

Amany Dayif, who used to work on behalf of detainees in Israeli prisons to access health care, said no one knows how many Palestinians in Israeli detention need care or what their conditions are because there is a lack of oversight from the Israeli health ministry.

"As a result, the Israeli prison service has no standard of medical care. For example, it does not collect statistics regularly regarding the illnesses or the healthcare needs of prisoners, something that is considered a crucial component of proper healthcare systems," Dayif said.

From her experience, she said, Israeli prison authorities manage the prisoner health care system poorly "mainly because it is a security organisation that sees health care as a last priority issue".

MEE emailed the Israeli prison service for comment on the treatment of Palestinian prisoners, but had not heard back ahead of publication. Occupation
Hours of insult for minutes with my brother: My monthly trip to an Israeli jail