BDS is 12 years old. We should celebrate, but the biggest victory is still to come

Nada Elia
BDS has achieved many significant victories. But this is one case where the final destination - not the empowering journey - is what matters most 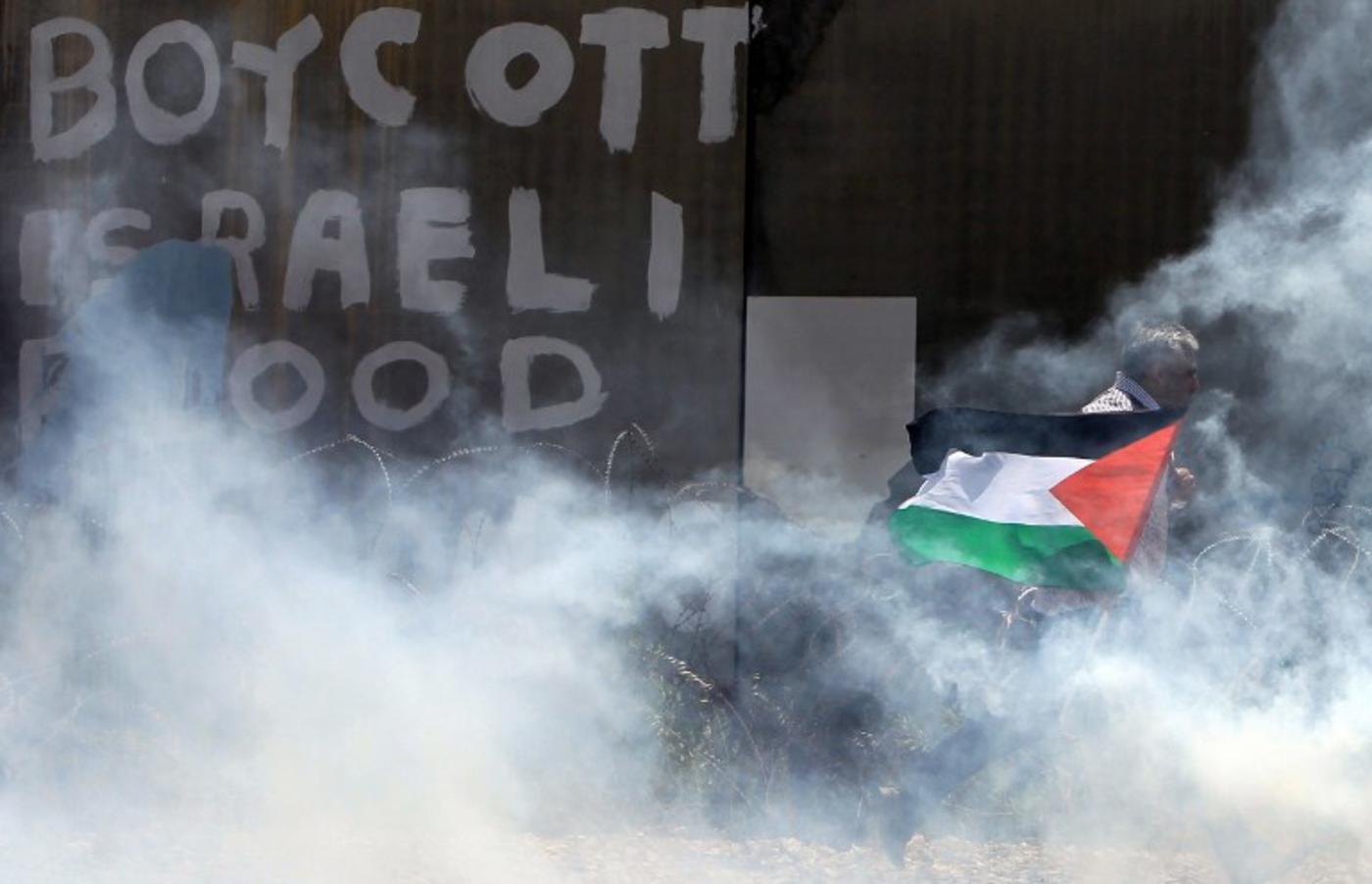 This month marks 12 years since a broad coalition of Palestinian civil society organisations issued the call for global solidarity with the Palestinian people in the form of a campaign to boycott Israeli products, divest from companies that profit from Israel’s violations of the human rights of the Palestinians, and call for sanctions against the government of Israel until it abides by international law.

'Boycott campaigns are not just about winning and losing, they are about the conversations that they start'

The “BDS movement”, as it has come to be known, with millions of allies globally participating in this grassroots resistance strategy, has achieved many significant victories over the years. Only last week, at its annual delegate assembly in Orlando, Florida, the Mennonite Church voted by a near unanimous 98 percent on a resolution to “avoid the purchase of products associated with acts of violence or policies of military occupation, including items produced in settlements”.

With this vote, the Mennonite church joined a long list of resolutions in favour of divestment by Christian congregations in the US includng the Quakers, United Methodists, Presbyterians, the United Church of Christ, Unitarian Universalists, the Catholic Conference of Major Superiors of Men, the Alliance of Baptists, and the Evangelical Lutheran Church.

And while Mennonites were discussing the divestment resolution, 19 organisations and 60 individual theatre artists signed a letter to the Lincoln Center asking the leading New York City theatre not to be complicit in Israeli propaganda. On 15 July, Pink Floyd legend Roger Waters is scheduled to hold a global Facebook lecture on cultural boycott.

Focusing on the US, the US Campaign for Palestinian Rights (USCPR) recently published a compilation of BDS victories, some going back to 2003, before the official call for BDS was issued, which lists multiple campus divestment resolutions, major academic associations endorsing BDS, various cultural boycotts, and church-based actions.

'From Palestine to Mexico, All Walls Have to Go' is not just a chant at a protest. It is a critical understanding of the importance of joint struggle

The wide array of the list reveals the extent to which multiple segments of the country - college students, church members, athletes and superstars - are now aware of, and actively opposed to, Israel’s abuses.

Also to celebrate the 12-year anniversary of the BDS call, the Boycott National Committee (BNC) sent an email to supporters listing 12 significant global BDS victories achieved in 2017. These include successes in Chile, Norway, Ecuador, Lebanon and, of course, the US.

Beyond these discrete victories, we can celebrate the mainstreaming of criticism of Israel amongst the American people, a long overdue de-linking of anti-Semitism and anti-Zionism, and the now pervasive use of the once-taboo expression “Israeli apartheid”. As USCPR steering committee member Andrew Kadi said in a recent webinar, "Boycott campaigns are not just about winning and losing, they are about the conversations that they start.”

Today, not only is BDS considered a threat to Israel, but Zionists in the US are increasingly on the defensive, rightfully feeling unwelcome in progressive spaces. Indeed, the once-epidemic PEP syndrome (Progressive Except for Palestine) is on the wane, as an ever larger number of people realise one cannot be progressive, anti-racist, anti-imperialist, and pro-indigenous sovereignty, and somehow not also denounce Israel’s violations of the Palestinian people’s human rights.

At Standing Rock, in Ferguson, in protests against deportations of immigrants, and at Pride events, as we chanted together “No Ban, No Wall” and “No Pride in Apartheid”, BDS has allowed us to forge alliances with disenfranchised activist communities that the Zionists, in their support of the apartheid wall, their desire for ethnic supremacy, their denial of the right of return for refugees, could not join, or were asked to leave, because of their disruptive behaviour.

The magnitude of our success is reflected in the fact that both Israel and the US have for years now been investing time, energy and money to counter BDS, which is (rightly) viewed as a greater “existential threat” to Israel than Hamas - a “threat to Israel” being understood as a challenge to the state sanctioning of Jewish supremacy, hinging on the dispossession and permanent disenfranchisement of the Palestinian people.

No matter how much we have gained from these 12 years of organising, nothing we achieve until then is truly complete, if it does not contribute towards justice

But while our many victories are tangible, the ultimate goal, an improvement of the circumstances of Palestinians in the historic homeland, as well as the global diaspora, remains so far unaccomplished.

The Gaza Strip is on the brink of “total collapse” as the genocidal siege - illegal collective punishment against a democratic choice by an occupied people - is  now in its tenth year, and getting more suffocating by the day, as the restrictions impact every aspect of life and social infrastructure for two million people.

Bedouin villages are still being destroyed in the Naqab (Negev) desert, a reminder that the Naqba is ongoing. Palestinian homes are being demolished in the West Bank, while new Jewish-only settlements are built, and established ones, no less illegal, are expanded. And of course, the refugees are still languishing in the diaspora.

And no matter how much we have gained from these 12 years of organising, nothing we achieve until then is truly complete, if it does not contribute towards justice.

Will the siege on Gaza be lifted? Will farmers in the West Bank be able to water their orchards? Will my mother, a child of Misrara in East Jerusalem who became a refugee at the age of 16, ever see her beloved hometown again?

My questions should in no way be interpreted as a sober assessment, a “where did we go wrong?” We are in the right. We are making huge strides. Each victory we score - and we continue to score victories big and small almost daily - is proof that we, the people, are stronger than the most militarised powers that are intent on suppressing us, more persuasive than the centuries of colonialist discourse that would censure us.

And each victory we score is not just a victory for the Palestinian people, it is a victory for all the communities coming together as we resist state-sanctioned violence and institutional racism everywhere. “From Palestine to Mexico, All Walls Have to Go” is not just a chant at a protest, it is a critical understanding of the importance of joint struggle.

Nevertheless, as BDS activists organise away from the situation on the ground, and face a completely different set of challenges from the Palestinian people living under siege, under occupation, in an apartheid system, our focus may inadvertently shift towards our own battles, and our local victories, as the larger but more important context fades in the distance.

And I cannot help but feel conflicted about celebrating “victories” while the oppression we seek to abolish remains unchanged. Instead, we must keep our eyes on the prize, as this is one case where the final destination, not just the empowering journey, is what matters.

Photo: A Palestinian protestor holds his national flag as he walks near a section of Israel's separation barrier amidst tear gas smoke fired by Israeli troops to disperse a weekly protest against Israeli occupation, on 13 June 2014 in the West Bank village of Bilin. (AFP)