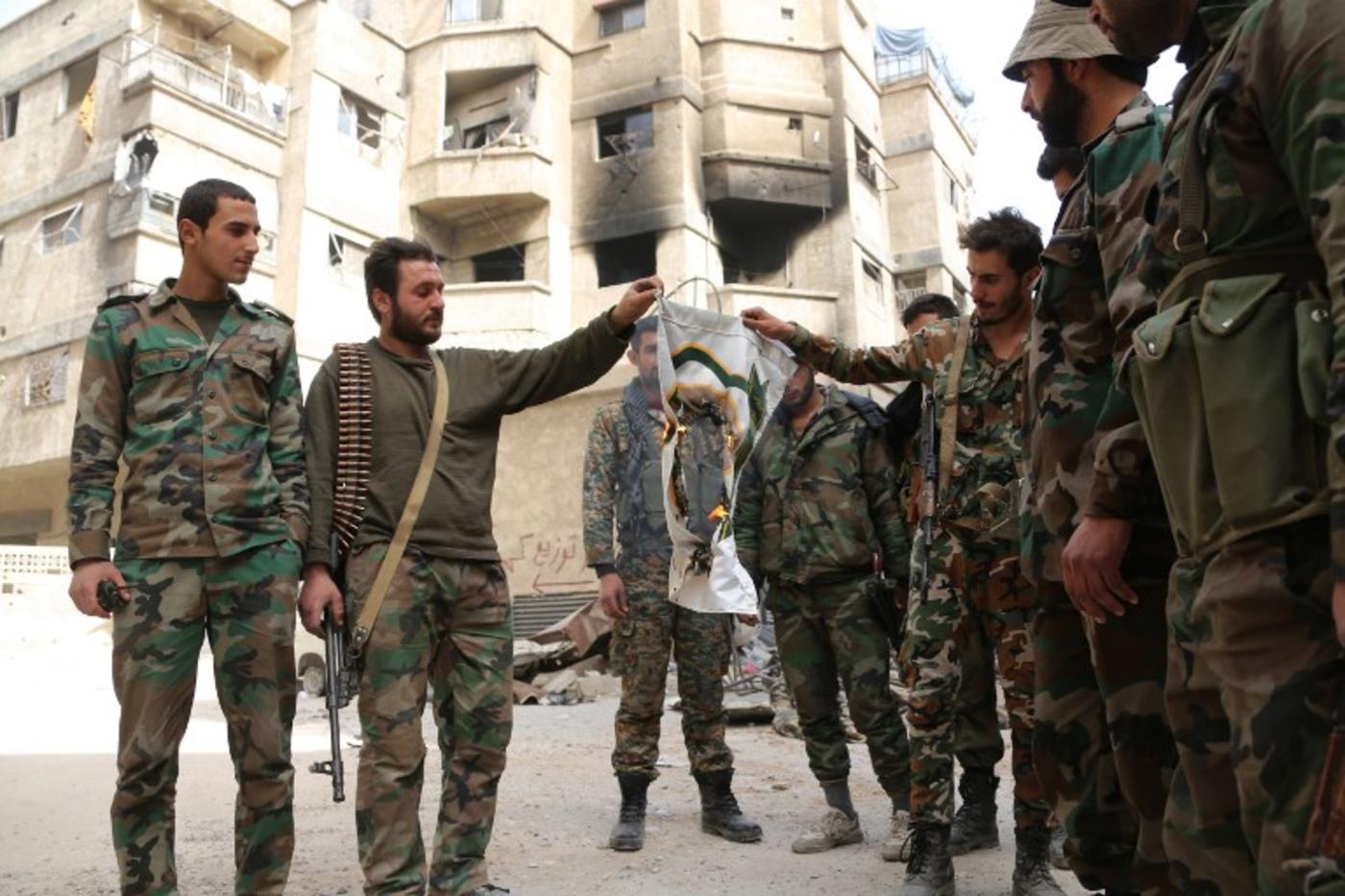 The term "reconciliation" usually implies some sort of amicable agreement between former foes. It is also reminiscent of South African-style transitional justice mechanisms. However, in the context of the Syrian civil war, "reconciliation" agreements are, for the most part, not so dignified.

Rather than offering any form of reconciliation in the traditional sense, these agreements are more a coercive tool used by the Syrian government to retake communities that have fallen outside its control. Most often, the government achieves this by creating a siege environment around the area and augments the inability of the population to access safety, food and humanitarian supplies through aerial bombardment.

These grim conditions spur the community inside the besieged area to put tremendous pressure on their leadership to reach some sort of agreement with the government to ease the suffering. This usually involves the evacuation of certain elements of the population and the reinstatement of Syrian government control over the territory.

As such, for most of the people living within "reconciled" areas, these types of agreements represent more of an imposed solution or terms of surrender than any form of reconciliation.

The evacuation of the rebel-held community of Daraya in August 2016 marked a turning point in the Syrian government's use of reconciliation agreements as a strategy to recapture rebel-held territories. Until the agreement in Daraya, localised ceasefires had been used in various communities throughout Syria.

These began in Barzeh, northern Damascus, and shortly afterwards with the UN-brokered ceasefire in Old Homs in February 2014. They were popularised by UN Special Envoy for Syria Staffan de Mistura, in hopes of buying time for opponents to come to some sort of political solution.

A strategic lineage can be drawn between local ceasefires and reconciliation agreements. While the government arguably did not have a formal blueprint for the trajectory local ceasefires and reconciliation agreements have taken, they are both a military strategy used to force rebel areas to acquiesce, either immediately or at a later date. The primary outcome of both is to subsume people and territory back into the state.

To add insult to injury, for many communities, there has been no notable improvement in living conditions post-reconciliation

The provisional nature of local ceasefires should not obscure the point that they are but placeholders until the government is in a position to retake the community. The ability of the Syrian government to leverage local ceasefires into reconciliation agreements was enhanced by Russia's involvement in the civil war, beginning in September 2015.

Augmented by Russian manpower and airpower, the Syrian government gained a greater ability to enforce sieges, laying the groundwork for the current ubiquity of reconciliation agreements, rather than local ceasefires.

Reconciliation agreements have come about militarily in most cases, but also via social pressure, such as in the communities of Soughaya in Zabadani and Mahjeh in Daraa. In these socially coerced agreements, the government sent WhatsApp messages to residents telling them to pressure their leaders into making a reconciliation deal in exchange for a one-year exemption from military service.

In both communities, before the agreement, an estimated 30 percent of people were still receiving salaries from public sector jobs, and the regime subsequently offered that when they did fulfill their military service - in reservist forces rather than active duty - they would continue to receive their public service wages in addition to a national service salary. Additionally, while there were some arrests, most people remained in their homes rather than being evacuated.

On the other hand, militarily coerced agreements have involved anywhere between a week (in Jobar, for example) to four months (in Daraya) of steadily tightening siege conditions and worsening aerial bombardment, until even people once staunchly opposed to the regime beg to make a deal.

The written reconciliation agreements betray a contractual air of quasi-legality and compromise that belies the malleable state of one side of the signatories. While many communities have pushed hard to include terms relating to the release of detainees as part of the deals, they had little leverage, and so very few, if any, have ultimately been released.

After days, weeks, or sometimes months of bombardment, to comply with the veneer of international legality relating to forced displacement, terms of the deals also theoretically offer residents a choice about whether to stay or leave. However, many are told by the Syrian government that their name is on a list, meaning that if they stay, they will be subjected to arrest and all that this entails in Syria.

In some reconciled communities, such as al-Qusayr, the government offered to delay conscription for eight or nine months, but began enrolments punctually on the day of the deadline

In practice, this means that irreconcilables, such as fighters and their families, as well as political leaders, such as local council members, along with activists will "choose" to be relocated, usually to Idlib.

At the same time, men, women and children who stay must also "reconcile" their status with the state. This involves going through security checks and military conscription if applicable, and signing a document confessing to being part of the rebellion, arguably giving the government leverage over you until the end of your days.

In some reconciled communities, such as al-Qusayr, the government offered to delay conscription for eight or nine months, but began enrolments punctually on the day of the deadline.

Additionally, those who stayed in reconciled areas such as Moadamiya, al-Tall, Qaboun and Wadi Barada must still pass through checkpoints, making it easy for the government to locate people who have not yet reconciled their status.

To add insult to injury, for many communities, there has been no notable improvement in living conditions post-reconciliation. Access for humanitarian and relief organisations remains a major hurdle.

Likewise, the government of Syria tailors service provision to residents in order to keep them desperate and dependent - dependent due to their reliance on Damascus to provide certain services, such as medical procedures, but desperate because Damascus will not help all the time, as a reminder of residents’ subservience.

If there is no escape route and nowhere else to be evacuated to, all these people will also be subsumed back into the state against their will - or they will die

Residents who were evacuated from Daraya to a government-controlled displacement camp in Harjala, southern Damascus, under the impression that they would be able to return to Daraya at some point, ended up having little access to medical or humanitarian assistance and have been unable to leave for fear of security checks.

Likewise, residents who left Old Homs four years ago are theoretically able to return; however, they must first pass through a sizeable number of security checks – a  process most former residents dare not face.

In January, the government used the cover of the de-escalation zone to retake railway infrastructure connecting Damascus and Aleppo with Idlib.

After Eastern Ghouta is inevitably reconciled, it is logical that in his stated vow to retake the whole of the country, President Bashar al-Assad will turn his attention to this last remaining bastion of irreconcilables. If there is no escape route and nowhere else to be evacuated to, all these people will also be subsumed back into the state against their will - or they will die.

As one manager from a cross-border organisation I interviewed put it: "Attacks are always more intense after a ceasefire. If there is a ceasefire, people know the devil is coming."

- Marika Sosnowski is an admitted lawyer and PhD candidate at the University of Melbourne. Her research focuses on ceasefires and how they influence local dynamics, with a focus on the Middle East.

Photo: Syrian pro-government fighters burn a Faylaq al-Rahman flag as they search for weapons caches in the town of Hazzeh in Eastern Ghouta on 27 March 2018 (AFP) 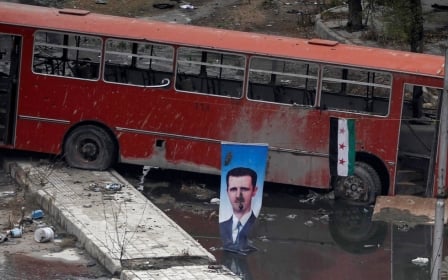