Amr Khalifa
While many in Egypt's army milk the country’s economy, millions of Egyptians languish in poverty. This an army for the army – not the people 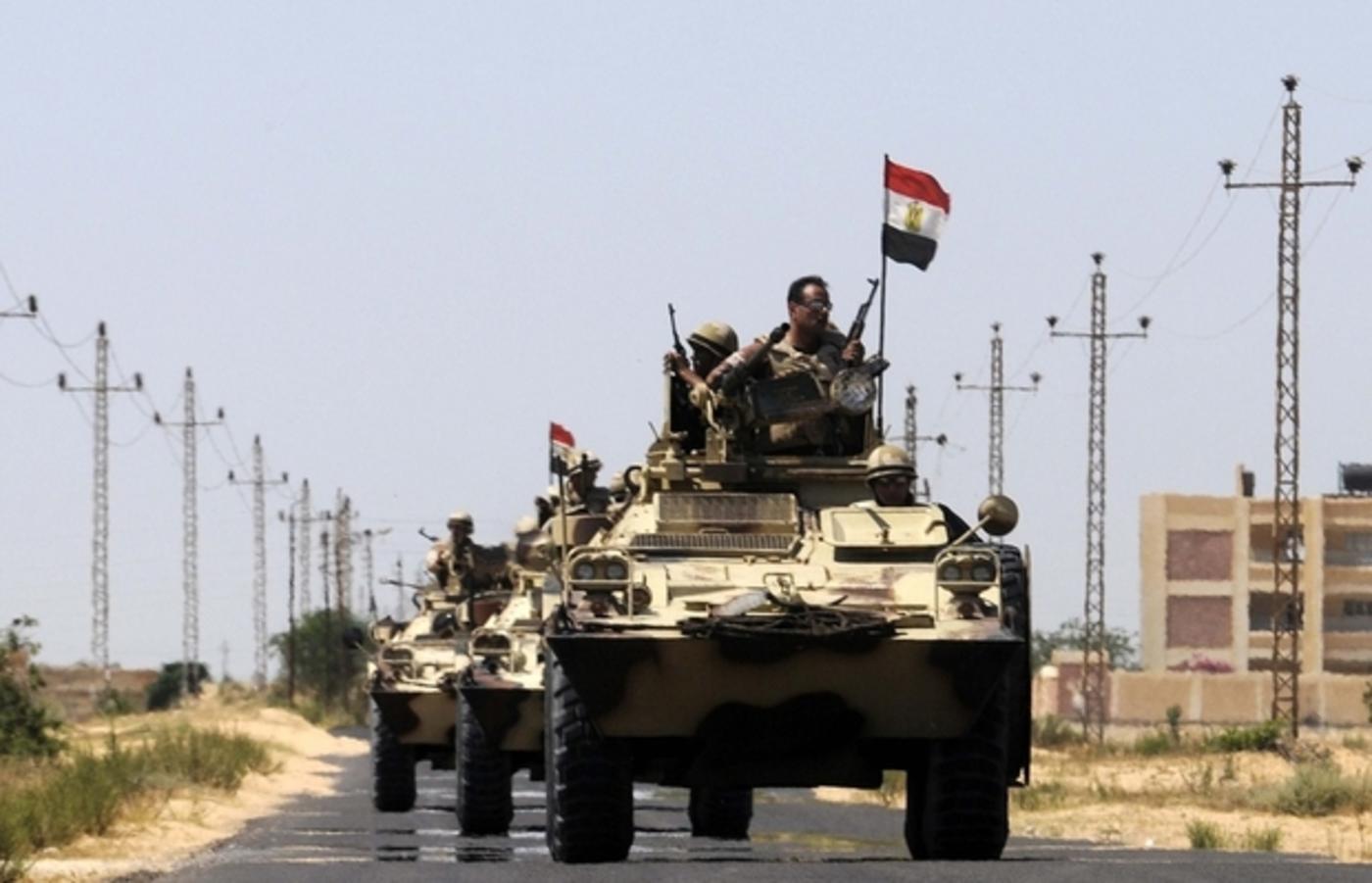 The Egyptian army is killing Egyptians.

Over the past several years, I have interviewed Sinai locals who said the men tasked with protecting them had instead been killing them. Until last week, the only video evidence had been Egyptian conscripts physically and verbally abusing Sinai residents.

All that changed on 19 April when a video broadcast by Mekameleen, a pro-Muslim Brotherhood TV channel based in Turkey, showed the bloodcurdling images of soldiers executing multiple Egyptians in cold blood.

In the days that followed, press and human rights reports suggested that the men executed with bullets to the head and the body may very well be the same men who appeared dead in a December 2016 video, released by the Ministry of Defence. Egyptian officials claimed that the video showed "terrorists" killed during a counter-terror operation in north Sinai.

The army, whose primary duty should be to protect Egypt, stands accused of profiting to the tune of billions of dollars from an economic hegemony that few can fully fathom

While horrific – and potentially war crimes - the atrocities committed in the video are only some of the army’s most graphic and visible crimes against Egyptians.

More quietly, the army, whose primary duty should be to protect Egypt against all enemies, stands accused of profiting to the tune of billions of dollars from an economic hegemony that few can fully fathom.

Many in this army’s leadership live lavishly, milking the country’s economy, while tens of millions of Egyptians languish under or just above the poverty line. This is a tale of an army for the army – not the people.

Just like Gamal Abdel Nasser, Anwar El Sadat, and Hosni Mubarak before him, Abdel Fatah al-Sisi is the latest gift from Egypt’s leading institution to Egyptians.

In the army’s nefarious enterprise, secrets are the name of the game: the Egyptian army budget is neither audited, nor taxed. For the nation’s economic well-being, this is the deadliest of games.

Estimates of the army’s goliath enterprise range from a pedestrian five percent of national GDP to a whopping 40 percent. Listen to Sisi and the figure is closer to 1.5 percent, but this figure is far too low to be credible. If his 1.5 percent were correct, the budget would total between 20 to 30 billion Egyptian pounds ($1.66bn-$2.77bn), based on 2015-2016 total GDP.

Yet, during that year, Egypt contracted with Germany to purchase four attack submarines. The price tag for two was reportedly a little over $1bn - or the four at approximatey $2bn, a figure that belies the president’s claim.

Neither Sisi nor the military’s upper echelon are singular problems for Egypt. Sisi and the army are each a tonne of limestone attached to Egypt’s hot air balloon. To float into the heavens, the latter must slim down and reshape the role of the former.

Doing so will be no easy task since Sisi, in what he sees as an attempt to stabilise the country, has had to guarantee the Egyptian Armed Forces (EAF) a vice-like grip on the economy to both pay for their political support and reward what he deeply believes is their unmatched efficiency.

And these tactics which Sisi thinks strengthen him may instead be his undoing, as Michelle Dunne, a specialist on Egypt now at the Carnegie Endowment for International Peace, told a US Senate appropriations subcommittee this week. This is a government, she said, which “adopts policies that promise chronic instability…the country is struggling and could be headed for unrest”.

Earlier this week, during a typically informal speech, Sisi made it clear that he is aware of the rage of the middle class over rising prices. And if he is to blame, Sisi explained, he is prepared to leave. The next day, the number one trending hashtag among Egyptians on Twitter was #WeDontWantSisi.

After declaring he was prepared to leave, the next day, the number one trending hashtag among Egyptians on Twitter was #WeDontWantSisi

Though Sisi is the one making a shambles of the Egyptian economy, he made it clear it is previous leaders, who lacked courage and failed to make the necessary reforms, who should be blamed. Last month, as the economy continued to implode, inflation reached 30.9 percent for the first time in three decades.

But if suspect number one behind Egypt’s economic crimes is Sisi, number two is the army.

The EAF is “the primary gatekeeper” of the Egyptian economy and to get to the heart of the issue, you must open its secret vault. However, the army almost never opens that door - almost.

In 2012, in an entirely different political climate with the institution under pressure from a more vociferous public, one fuelled by revolutionary confidence, the army was forced to release figures which showed the annual revenues of army-controlled businesses at $198m.

If you, like me, you find that figure laughably low, you need only look to a revenue figure of $345m for the 2009-2010 fiscal year cited by Sayed Meshaal, former minister of military production, for proof of army funny business provided by its own brass.

The complexity of the army’s economic empire is fuelled by a tremendous resource: the cheap labor provided by 500,000-plus conscripts

Clearly, the army’s publicly released figures were grossly understated. But how can researchers and analysts alike circumvent military deception to get a more accurate picture? Numerous attempts to obtain independent information - or even army financial details - often result in dead links or deleted pages of articles that once existed. If the military has nothing to hide, why the dead ends?

Since Nasser’s time, the army has expanded to become Egypt’s number one service provider, making the economy’s well-being dependent on it.

Sadat backed away from the paradigm to a degree, but Mubarak brought it back full throttle as a behind-the-scenes gift to the military complex so it would turn a blind eye to the ultimate act of nepotism: the illegitimate transfer of power to his son, Gamal.

Ultimately, this proved to be his undoing. However, under Sisi, the dual roles of the army - leading service provider and the elephant in Egypt's industrial zoo - have expanded massively.

The failing - at least according to the latest CAMPAS numbers - new Suez Canal is at the head of a long list of projects handed off to a military whose businesses span water bottling, bakeries, gas stations, land dealings, hotels and some of the world’s largest shipping conglomerates in tandem with state banks and international lenders.

The complexity of the army’s economic empire, while spanning many other industries such as food packaging, steel mills, fisheries, and pharmaceutical plants, is fuelled by a tremendous resource: the cheap labor provided by 500,000-plus conscripts.

So the EAF can tender offers on any project, medium, large or mega and can come in significantly under competing bids - though competition here is hardly existent. A no less sinister underpinning of the military schemata is the notion of the silent muscular partner.

It is a secret known by many and admitted by none, that just as the Mubarak clan headed by sons Gamal and Alaa were injected as partners, without capital, as a cost of doing business, the army, during Sisi rule, is said to enjoy a similar advantage.

With a virtual monopoly on so many crucial businesses, and secrecy draping corruption, is it any wonder that the economy is in structural trouble? Private businesses of varying size cannot hope to compete with such a behemoth.

In 2011, when Egyptians rose up, it was not merely a rebellion against Mubarak, but, in the eyes of astute observers, also against a system wherein the military was the effective ruler.

The army has not learned from history: short and medium terms gains, however large, can lead to long-term losses

To have reaped the fruits of success, the revolution would have needed to instate structural changes to marginalise the army, economically and politically.

Instead, since those glory days of popular upheaval, the army has led a counter-revolution whose primary objectives have been nothing short of complete control over both the economy and politics, driven by financial hunger and the personal interests of an elite subset.

But the army has not learned from history: short and medium terms gains, however large, can lead to long-term losses. The inherent injustice of economic and political hegemony can, in and of itself, be a trigger for the very unrest that men with guns have sought to forestall since 2011.

Eight days after the revolution, I warned that “those who hold one-fifth of the pie will not go quietly… [they] will suppress any and all institutional and constitutional attempts to curb that economic control".

If these words were prophetic, analysis of the current state of the military economy portends nothing but instability for those in control. If the army continues to be a state within a state, to garner riches instead of defending the people, it will only implode the very state it claims to protect.

No matter how this plays out, let the words of a general in charge of military economic portfolio ring in your ears: the economic military empire is “is our sweat and we are going to protect it with our blood”.