Peter Oborne
Britain's immoral alliance with Saudi Arabia has made it complicit in mass murder in Yemen, writes Peter Oborne on his return from Sanaa 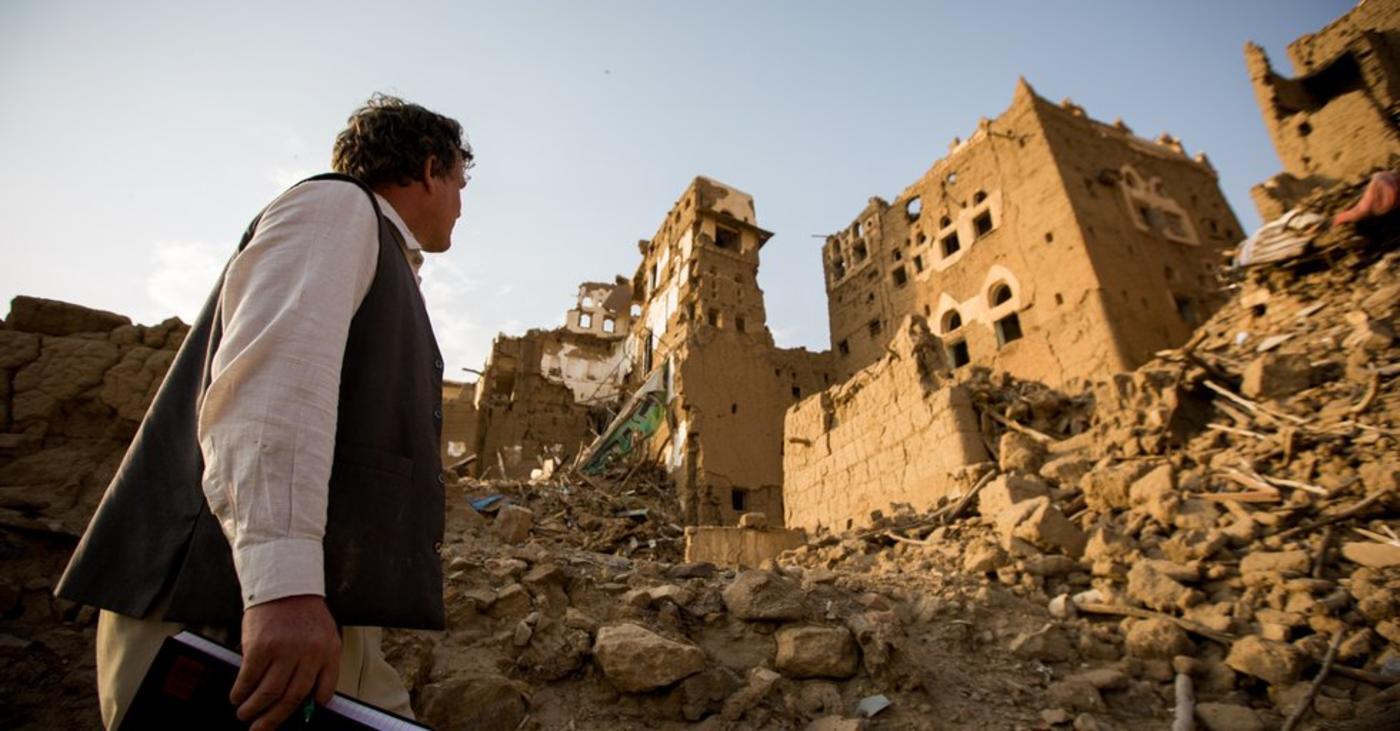 Boris Johnson has the potential to be one of the great British foreign secretaries of the modern era. He is far more intelligent and interesting than his dull and conventional predecessor Philip Hammond.

Johnson is well-read, well-travelled and – as his principled stand during the Brexit referendum showed – possesses raw political courage.

However, Johnson faces an urgent problem. He has inherited from Hammond a cynical and immoral policy which has done great damage to Britain’s international reputation.

This concerns the Saudi-led war in Yemen, which has killed thousands of civilians, destroyed a great deal of Yemen’s priceless architectural heritage, wiped out much of the country’s infrastructure and, according to the World Food Programme, reduced the majority of Yemenis to the verge of starvation.

Britain has backed the Saudi-led coalition since its intervention in the Yemeni conflict in March 2015, and has acted as its international apologist.

Hammond blocked a Dutch plan for an independent investigation into alleged Saudi war crimes. He and his ministers repeatedly misled the British parliament by claiming that Britain had carried out an assessment which cleared Saudi Arabia of breaches of international humanitarian law. It had done nothing of the sort.

Meanwhile, British servicemen were present in the Saudi control room which directed military operations against Saudi targets (though their exact role remains unclear). Hammond - who was taking instructions from the former British prime minister David Cameron - was therefore complicit in the Saudi devastation of Yemen.

This means that Britain bears its share of responsibility for the thousands of civilian deaths caused by Saudi-led military operations. Britain – along with the United States – has arguably been complicit in mass murder.

READ: A calamity is unfolding in Yemen and it is time the world woke up

Boris Johnson therefore faces the most serious moral choice of his brilliant and colourful political career.

He can either carry on with the Cameron/Hammond policy of shielding Saudi Arabia and its allies from international criticism.

Or he can repudiate the Cameron/Hammond policy and strike out on his own.

Yet the pressures upon the new foreign secretary are enormous. Bear in mind that if he changes tack on Yemen, he will not simply anger the Saudis. He will also infuriate the British defence and foreign policy establishment.

The alliance with Saudi Arabia and the Gulf states has been at the heart of British policy in the Middle East for the last 40 years. It is a simple equation: they sell us oil and we sell them arms.

Since the fall of the Shah in 1979, the UK and Saudi Arabia have shared a common enemy in the shape of theocratic Iran.

If Johnson decides to change policy on Yemen, he will make a bitter enemy of the British national security apparatus, which is contemptuous of democracy and accustomed to effortlessly winning its Whitehall battles against what it sees as transient politicians like Johnson - and not fastidious about its methods.

Thus far, I have been staggered by Johnson’s courage. He has angered the Saudis and the Gulf states on two crucial issues.

At the end of July, within weeks of taking office, he formally repudiated Philip Hammond’s false and deceitful claim that Britain had carried out an assessment which had cleared the Saudis of breaching international humanitarian law.

In fact, no such assessment existed. At Johnson’s direction, the junior foreign office minister, Tobias Ellwood, stated this on the record on 21 July. This foreign office admission was a warning to the Saudis that, under Boris Johnson, Britain is no longer prepared to jeopardise its own integrity on behalf of Saudi Arabia.

His next move was yet more important. He reopened formal diplomatic relations with Iran, which is regarded by Saudi Arabia and the Gulf States as the existential enemy.

So British policy on Yemen is starting to move. It is deeply impressive that Boris Johnson has acted so fast. However, he still has a very long way to go.

It is important to remember that Saudi Arabia and its allies have committed war crimes. These have been carefully documented by human rights groups like Amnesty International and Human Rights Watch, and corroborated by the United Nations.

Four Doctors Without Borders (MSF) hospitals have been attacked, even though they gave their coordinates to the Saudis. Schools, factories, markets and residential areas have been targeted.

When I visited Yemen for Middle East Eye at the start of last month with Nawal Al-Maghafi, we both felt a profound sense of shame and anger that a supposedly decent country like Britain could sanction crimes of this nature.

Again and again, baffled ordinary Yemenis asked us why the British (who as former colonial rulers of the southern port of Aden are more fondly remembered than we probably deserve) have flung in their lot with the Saudis.

The Houthis have committed terrible atrocities, but the worst carnage has been inflicted by the Saudi-led coalition.

READ: Sanaa: A tale of two leaders in a city without hope

In our judgment, the Saudi attacks are not just criminal but counter-productive because they have galvanised massive popular support for the Houthis against the common oppressor.

Indeed but for the Saudi attacks, the Houthis might well have been thrown out of Sanaa, the Yemeni capital.

Throughout all of this, Britain has supplied arms to Saudi Arabia. Not a single contract has been refused since the conflict began. Our continued supply of arms is probably illegal.

Here is why: Britain was one of the strongest supporters of the Arms Trade Treaty when it was agreed two years ago. Since then, the British government has systematically ignored its provisions.

The treaty insists that no arms should be sold when there is an "overriding risk" that they will be used in breach of international humanitarian law.

Yet a mountain of evidence has accrued from authoritative and independent sources that the Saudi coalition has carried out dreadful atrocities. So Britain is shockingly in breach of an arms treaty it supported only two years ago.

How do we get away with this? By turning a blind eye. When Philip Hammond was foreign secretary, he insisted that was no "credible evidence" of violations. He argued that the Saudi coalition itself should carry out its own investigation.

This position was exploded as a sham at the beginning of last month, when the Saudi coalition released the first results of their investigations. Its report, which delivered short verdicts on eight alleged atrocities, looks like a blatant cover-up.

Very little detail is provided. We do not know how its impartiality can be guaranteed. Doubts surround not only its conclusions, but also its facts.

For instance, the investigation found no “human damage” at the Haydan Hospital in Saada - which had to close after the Saudi-led coalition bombed it last October - whereas Human Rights Watch recorded that two patients had been injured.

It is well past time that Britain supported an independent inquiry and, luckily, next month the UN Human Rights Council meets in Geneva and will discuss the Yemeni war.

READ: How Yemen's past is being erased, one air strike at a time

Last year, Britain played a disgraceful role at this very event, helping to block the Dutch call for an independent inquiry. This time, we must support one, however much such a move would infuriate the Saudi government and its allies and supporters in the West.

This is what Boris Johnson wrote in yesterday’s Times newspaper: “We are seeing indiscriminate attacks on civilians; the bombing of medical facilities; children pulled bloodied from the rubble.

“We are forced to watch one of the most ancient homes of civilisation being literally pulverised, the lives of innocent families shattered by every kind of munition from barrel bombs to chlorine gas.”

These remarks were directed at Syrian President Bashar al-Assad but (with the exception of chlorine gas and barrel bombs) they apply just as much to the Saudi-led coalition in Yemen.

Yet Britain is presently the main international supporter of Saudi King Salman in his murderous war on Yemen. This is a gross double standard.

The Saudi monarchy was the linchpin in the system of international alliances favoured by former prime minister Cameron.

It was a system that was blind to human decency and paid attention only to what was perceived as British commercial interest.

Now that Cameron has quit, and the country has a new prime minister and foreign secretary, we have a chance to reassess and reshape that foreign policy.

As Saudi bombs continue to rain down on Yemen, there is no time to lose. 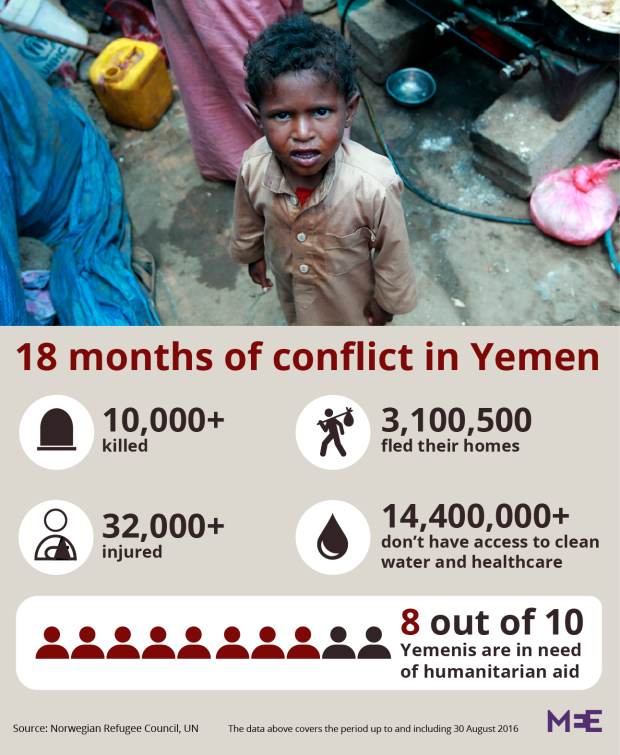 - Peter Oborne was named freelance writer of the year 2016 by the Online Media Awards for his reporting for Middle East Eye. With MEE colleague Nawal Al-Maghafi, he is among the few correspondents to have ventured into war-torn Yemen in recent months. 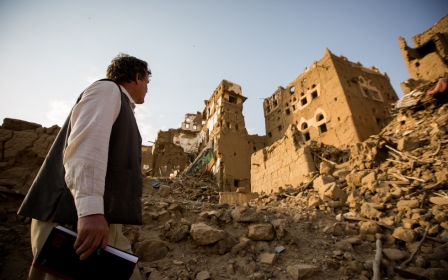 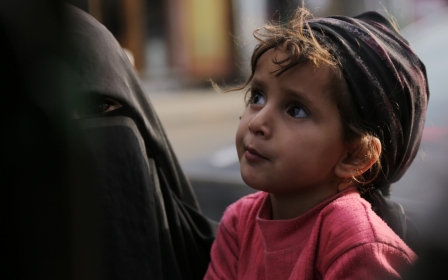 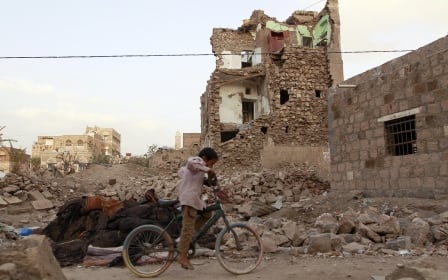