Can Iran's government survive the 'toughest sanctions in history'?

Mahan Abedin
With the Trump administration determined to drive Iran into a corner, the Islamic Republic has little choice but to hunker down and resist 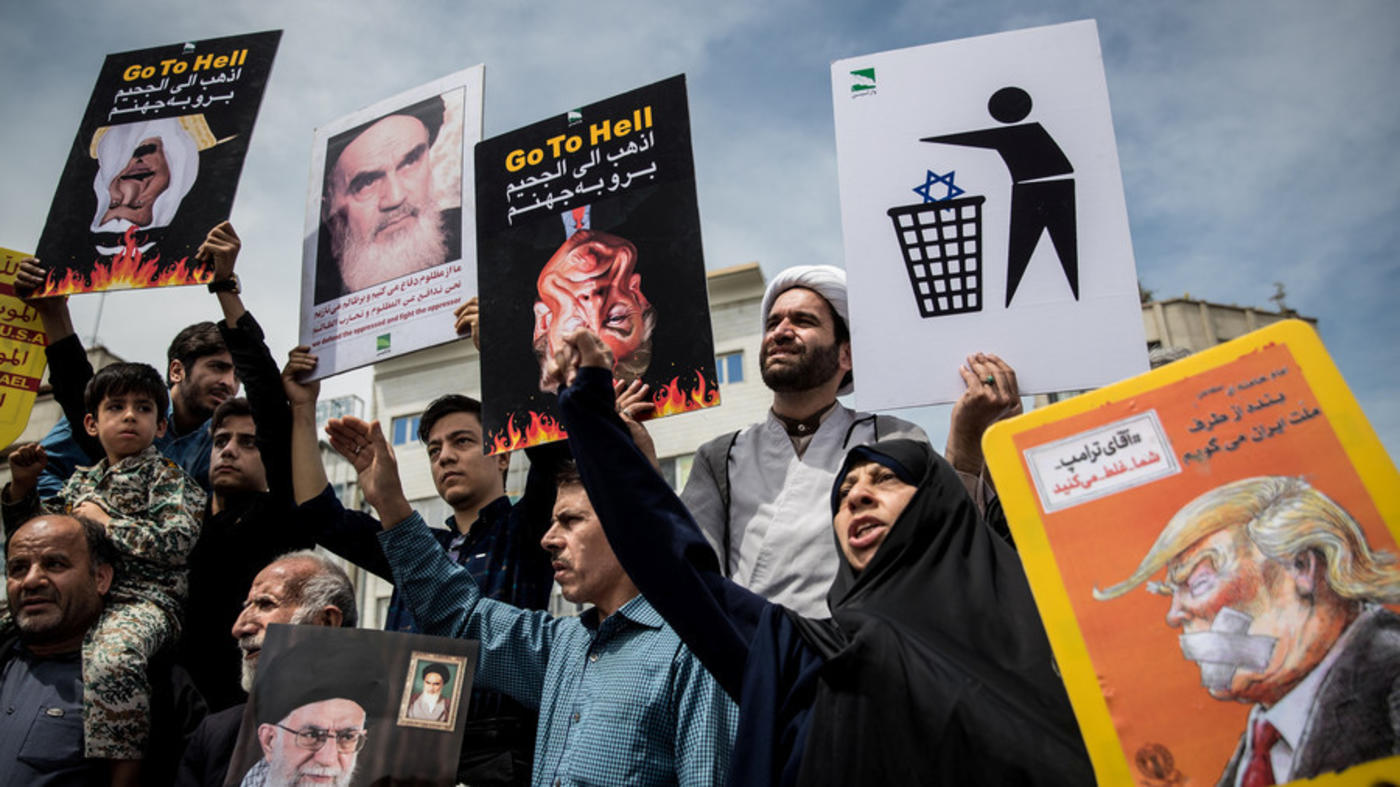 As the latest round of US sanctions kicks in, Iran is faced with the prospect of potentially crippling economic embargo for the foreseeable future - at least until the expiry of President Donald Trump’s first term in January 2021.

Iranian President Hassan Rouhani struck a defiant tone on the day sanctions were reimposed, vowing to "break" them and to continue selling oil on international markets.

The US threat to reduce Iranian oil exports to zero underlines Washington’s determination to impose the "toughest sanctions ever placed" on the Islamic Republic. The US has effectively called for an economic siege on Iran, and if it comes anywhere close to reducing Iranian oil exports to zero, then the Islamic Republic could face a devastating conomic crisis with social and political repercussions.

In view of Iran's decades-long struggle with wide-ranging US and broader international sanctions, however, the country has both the spirit and the knowhow to defy the embargo.

The greater danger for Iran is the risk of escalation on other fronts, in view of the declared US position of rolling back Iranian influence across the region. As the Islamic Republic comes under more and more pressure from the US and its regional allies, it will be less able to resist the temptation to directly confront its tormentors.

In view of the Trump administration's war-like rhetoric, international media organisations have been wondering aloud about just how "tough" the latest sanctions really are. The short answer is that they are indeed unprecedented in both depth and breadth.

In addition to the critical oil, finance and transportation sectors, the sanctions also directly target up to 700 Iranian individuals and entities, many of whom played critical roles in subverting the previous rounds of sanctions.

The last round of punishing US unilateral sanctions was imposed in January 2012 by the Obama administration. These sanctions were in keeping with broader multilateral sanctions rooted in United Nations Security Council resolutions, which focused on the more controversial aspects of Iran's nuclear programme, notably uranium enrichment.

The latest US sanctions are unilateral in nature and do not even meet the approval of Washington’s Western allies, including Britain, let alone the broader international community.

Underscoring widespread international concern about US plans and intentions, Russian Foreign Minister Sergei Lavrov was quick to condemn the sanctions as “absolutely illegitimate” and deeply disappointing.

In view of the four-decade history of sanctions, Iran has extensive experience in circumventing them by exploiting loopholes and creating wiggle room in highly creative ways. There are already reports that Iran is using “ghost tankers” to export oil to customers. These efforts are likely to be stepped up as the Trump administration’s temporary “waivers” to eight countries - including China, South Korea, India and Japan - expire after 180 days.

But even if Iran continues to sell oil on the international markets at an acceptable level, it is still faced with the formidable challenge of receiving and processing funds. The US is applying great pressure on the Belgium-based SWIFT global payments system to halt all sanctions-related transactions with Iranian financial entities.

In the latest sign that big international companies and financial institutions are heeding Washington’s warnings, SWIFT has now reportedly cut its links to Iran’s central bank. The disconnection makes it more difficult for Iran to settle import and export bills.

Moreover, Iran cannot realistically rely on European powers to throw it a permanent lifeline in the face of relentless US pressure. The Europeans, notably the signatories to the 2015 landmark nuclear deal, have committed to creating an alternative financial platform, the so-called “special purpose vehicle” (SPV), to sidestep US sanctions.

But underscoring the difficulties and sensitivities surrounding the case, EU powers have been slow to act, and no single country has volunteered to host the SPV.

On Tuesday, Reuters reported that the special European Union initiative to protect trade with Iran against newly reimposed US sanctions faces possible collapse, with no EU country willing to host the operation for fear of provoking US punishment.

An additional challenge is the “smart” dimension of the latest sanctions regime. Just as Iran has accumulated experience and expertise in subverting sanctions, so has the US gained knowledge of Iranian counter-sanctions techniques.

Many of the 700 sanctioned individuals and entities are key players in Iran’s counter-sanctions strategies. In addition, in recent years, the US has systematically targeted central players in Iran’s international sanctions-busting networks.

Iran will struggle to replace these well-placed individuals, notably Turkish-Iranian businessman Reza Zarrab, who has been providing vital intelligence to US prosecutors about Iranian sanctions-busting efforts and related activities.

One of the key goals of the US sanctions is to foment unrest within Iran, with a view to changing the country’s foreign policy. The ultimate - albeit undeclared - goal is to facilitate the downfall of the Islamic Republic.

While Iranian President Hassan Rouhani strikes a defiant tone on the effect of the sanctions, the experience of the past six months alone suggests that major economic upheavals, with social and political consequences, cannot be ruled out.

After Trump’s withdrawal from the nuclear deal in early May, the Iranian currency went into freefall, and the price of gold soared. This impacted multiple layers of the economy, thus adversely affecting millions of people, if not the entire country.

While the ensuing social unrest has been limited, the danger is that as the full-blown sanctions bite, and specifically as ordinary people are more exposed to their effect, a deeper social convulsion could be touched off.

At present, however, the Iranian government is not in immediate danger. The efficiency of security forces means that protests are nipped in the bud before they have the opportunity to expand. Moreover, the absence of a credible opposition platform inside the country makes it next to impossible to capitalise on random protests.

Beyond the ultimate goal of toppling the Iranian government, the Trump administration is pursuing three distinct goals as part of its sanctions strategy. Foremost, it wants Iran to sign up to a new nuclear deal, which would ensure the crippling (in perpetuity) of Iran’s nuclear programme.

Second, the US seeks curbs on Iran’s ballistic missile programme, thus neutralising Iran’s most effective means of deterrence. Third, the US wants to change Iran’s regional behaviour, to roll back the Islamic Republic’s extensive influence across the Middle East.

These goals were set out as part of US Secretary of State Mike Pompeo’s list of 12 demands on Iran issued in May. The oppressive nature of this list - which was essentially a call for Iran to surrender - was correctly interpreted in Tehran as a sign of disengagement by Washington.

In other words, the reimposition of sanctions is much more about inciting confrontation than creating conditions for a new round of bilateral talks. In view of this harsh reality, Iran will continue to reject spurious and insincere offers of talks and engagement.

As pressure peaks, the Islamic Republic will mobilise all of its material and ideological resources not only to survive, but to identify new spaces for expansion

The challenge for Iran is to maintain its current regional posture while simultaneously containing the sanctions regime. It is a tough balancing act that is continually vulnerable to destabilisation, especially in the event of domestic strife or provocative actions by Washington’s allies, notably Saudi Arabia and Israel.

As to whether the US can force Iran to capitulate, the answer lies in the Islamic Republic’s culture of resistance and defiance. As pressure peaks, the Islamic Republic will mobilise all of its material and ideological resources not only to survive, but to create new spaces for expansion.

Photo: Iranians protest against US withdrawal from the 2015 nuclear deal (Tasnim via Reuters)