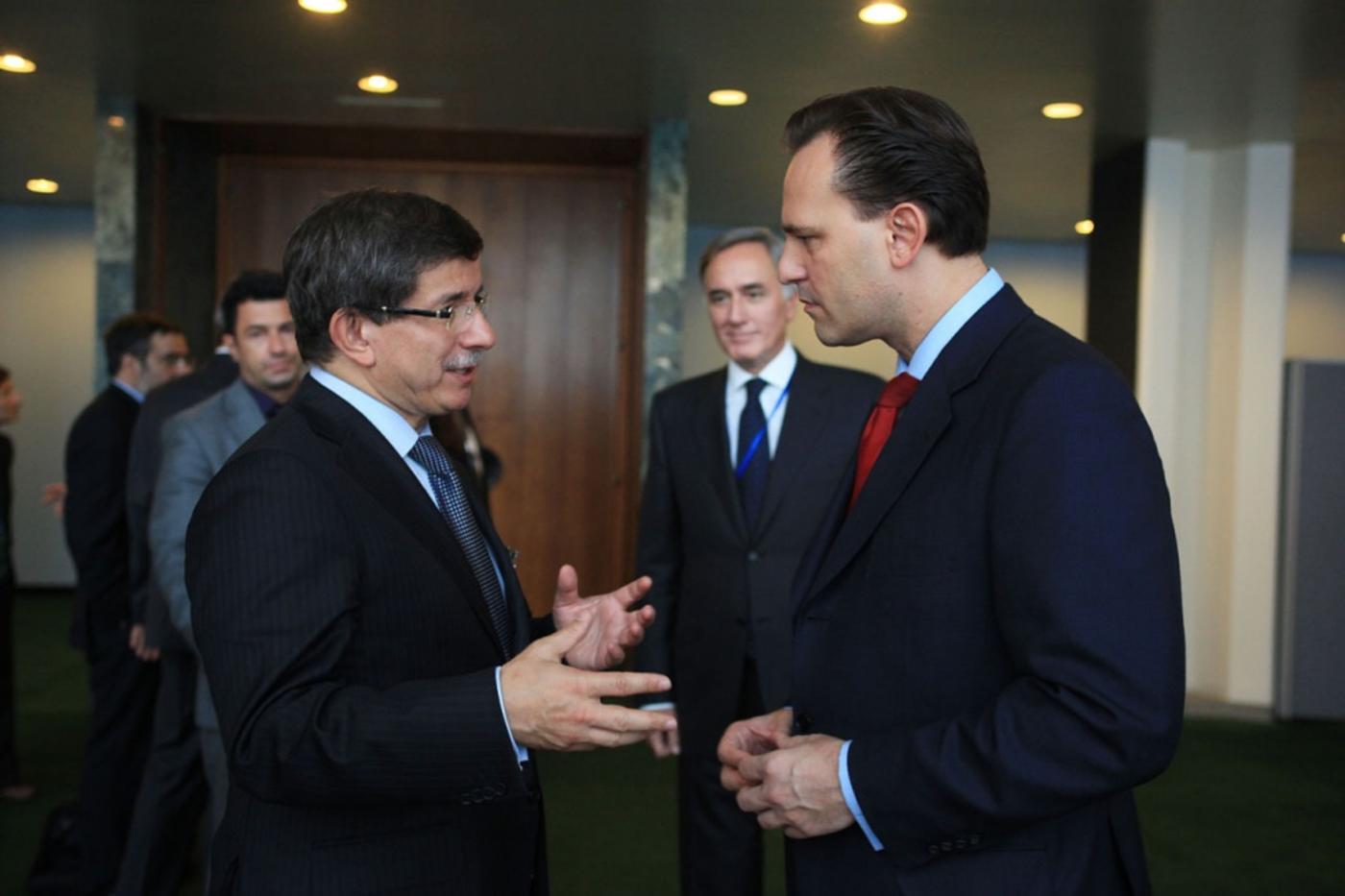 When Turkish Minister of Foreign Affairs Ahmet Davutoglu took office in 2009, he was determined to pursue a ground-breaking agenda for Turkish foreign policy at a time when the country needed alternatives to past strategies: traditional Western “allies” were being weakened by the global financial crisis and European Union relations were deteriorating.

Meanwhile, trade with Middle Eastern countries was flourishing, Turkish cultural products (soap operas, TV series or music) were increasingly popular in the Middle East and North Africa, and the fortunes of both Turkey and Turkish Prime Minister Recep Tayyip Erdogan were on the rise in the Arab world, particularly after Erdogan’s heated debate with Israeli President Shimon Peres during the Davos economic forum in 2009.

In this environment, the foreign minister saw a chance to forward the foreign policy doctrine explained in his famous book Strategic Depth, which aims at diversifying Turkey’s regional partnership choices.

Under Davutoglu's doctrine, Turkey could not merely remain an ally of the West, and rather needed to benefit from what he called its  “multiple regional identities”.

This was necessary, he argued, if Turkey was to assert political influence over a vast region comprising the North Africa, Middle East, the Balkans and the Caucuses, as well as to activate the “strategic depth” stemming from its historical legacies.

The backbone of the doctrine has been the idea that, in Davutoglu’s own words, “Turkey enjoys multiple regional identities and thus, has the capability, as well as responsibility, to follow an integrated and multi-dimensional foreign policy".

Turkey aspired to become what he called an "oyun kurucu ulke" or “game setter” in a vast geography, so long as its interventions were accepted by local populations.

Within the extraordinary conditions created by the Arab uprisings, Turkish foreign policy found an opportunity to pursue its new ambitions. Both Davutoglu and Erdogan used these to call for political reforms and promote the image of Turkey as a Muslim and democratic country that should be seen as a “model”.

However, the strategic depth doctrine found itself at an impasse within a very short period of time, notably as a result of the Syrian and Egyptian crisis.

Syrian President Bashar Al-Assad rejected any approaches from the AKP government concerning regime change and ending violence and continuing his reign according to his own code of conduct.

The Turkish government’s disapproval of the military intervention against the Mohamed Morsi government ushered in estrangement from Egypt.

Today, Turkey has no diplomatic relations with these two very influential Middle East countries. Moreover, Turkey’s Syrian policy has been a factor of alienation with Shiite populations and the country has been diverging from the Sunni bloc during the Egyptian crisis in a way to further increase its regional isolation.

As Turkish foreign policy is still trying to compensate for its loss of ground in the Middle East, the Iraq crisis caused by ISIL’s shocking advances has emerged. In reality, the Iraq crisis is likely to have much graver consequences for Ankara's policy plans than the uprisings in Syria and Egypt.

Turkey-Iraq relations were becoming the sole success story for the “strategic depth” doctrine. Despite lack of an entirely cooperative posture between Ankara and Baghdad, Iraq was becoming Turkey’s second trade partner, as Turkish exports to Iraq had increased to US$12 billion dollars from 5 billion in 2009, the year Davutoglu entered office.

The AKP government’s most effective foreign performance had been signing an energy cooperation agreement with the Northern Iraqi Kurdish government, notwithstanding the still unresolved Kurdish question. These were vital achievements, as the AKP government was hoping for a spill-over of economic cooperation drive towards other regions.

However, the ISIL acted faster.  As the group expands its control and influence in the region, it is paralysing the economic sphere. The most immediate repercussions of ISIL’s progress concern Turkish firms pursuing economic activities in the occupied areas, particularly in Mosul, where the Turkish consulate was also occupied and 49 Turkish citizens were abducted.

The kidnapping of 31 Turkish truck drivers designates pending threats on Turkey’s economic activities. With the escalation of violence, Turkish exports towards Iraq are likely to shrink and the existing and upcoming energy projects are at risk of being undermined.

The future of Turkish economic interests in Iraq now depend on how the government will handle its relations with ISIL, which is in itself extremely problematic.

New rhetoric for a changing dynamic

Davutoglu’s “strategic depth” concept may be considered an attention-grabbing intellectual enterprise. And presently, the minister’s rhetoric is facing its most challenging test as an operational foreign policy doctrine.

For Middle Eastern Islamic groups, it is extremely unlikely that Turkey and the AKP will become models. ISIL is no exception. Being attached to Wahhabism, and with a severe distance from Anatolian Sufism, Abu Bakr al-Baghdadi’s organisation considers the AKP to be a secular government which cannot even be recognised as “Islamic”.

In order to maintain influence in the region, the AKP needs to alter its foreign policy rhetoric - particularly on ISIL - but without pulling back from the “strategic depth” doctrine. Davutoglu and Erdogan's stances regarding the abduction of 80 Turkish citizens will be under pressure on this issue.

After the abduction, Erdogan called on the press to “follow the incidence without too much writing and avoid irritating the ISIL”. Shortly after this speech, the 9th Court of Serious Crimes in Ankara ruled that the media should not cover the hostage crisis in the interest of national security and also conveyed that news on the crisis were aiming to claim state weakness.

From his side, Davutoglu did not refrain from revealing his tendency to understate the crisis by conveying that “the latest developments are reflected as if there is chaos in Iraq”. Moreover, the duo never called ISIL a “terrorist organization”, although it was accepted as such by the council of ministers meeting of 16 June.

It seems that the AKP government cannot, up until now, develop a sustainable strategy regarding the Iraq crisis. This is at odds with the strategic depth’s assertions, as the government chooses to follow the evolution of events and explore the circumstances, rather than pursuing influence in the region.

At this instant, there could be two possible scenarios:

If the AKP chooses to insist on purusing the last five years’ foreign policy principles, it will soon have to act and engage in a regional competition with ISIL for securing its regional economic dividends. This will mean that it will have to divulge a tendency to prefer seeing Kurds, and not Sunni fundamentalists, as its closer neighbours and partners. This choice could have positive outcomes on the Turkish-Kurdish relations, however would also signify that the government may have to pay a big price for opening an anti-ISIL front.

If the Turkish government chooses inertia, that could be the end of the strategic depth doctrine. It should not be forgotten that ISIL has important “room for expansion”, particularly through the Sunni populations of Iraq irritated with the pro-Shiite Maliki government. And after the Syrian and Egyptian crisis, this room is bigger than the AKP’s.

Any indulgence towards the ISIL’s advancement could mean succumbing to the emergence of a new Islamic bloc in the region. In this case, the Middle Eastern facts may oblige the government to adopt a new foreign policy discourse taking into account religious and sectarian sensibilities instead of historical legacies.

The fate of the “strategic depth” doctrine is being written in Iraq.​

- Ozan Serdaroglu, PhD, is a Visiting Research Fellow at the Institute for Security and Development Policy. He has research experience on Turkey and the Eastern Mediterranean, with a focus on political and economic development, regional cooperation, Euro- Med relations and energy policies. Turkey Politics
What future for the Erdogan-AKP dynamic?