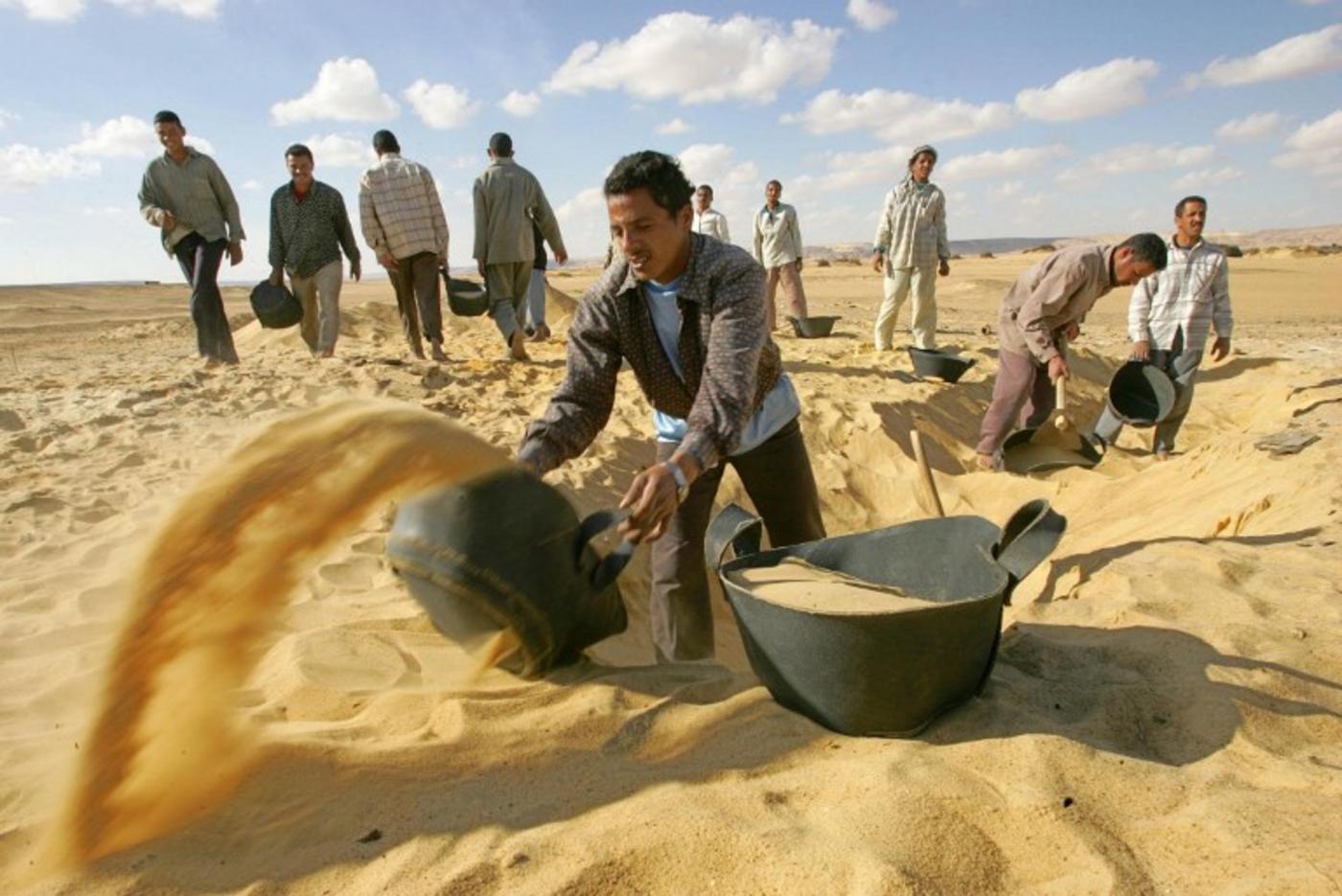 When it comes to beauty and breadth of antiquities, Egypt is a superpower. This one-time cradle of civilisation, with some of the finest Islamic art and architecture in the world along with our immortal pyramids, should be a premier tourist destination.

But at a time when hard currency is at a premium, the Land of the Nile is falling down tourism lists. And, as we peel back the layers, a troubling portrait emerges.

For hope to return where archeologists roam, there must be change in Egypt. The world of antiquities awaits a revolution to protect its very existence

Before the revolution dominated the landscape, Egypt registered more than 14 million tourists in 2010, up from over 12 million in 2009, a 17.5 percent spike in visitors.

And then things quickly went downhill. First, in September 2015, the army mistakenly murdered Mexican tourists in the desert, destroying that market for the foreseeable future. A terrible trifecta of terrorism followed: a downed Russian plane in October 2015, a hijacked Egypt Air flight in March followed by a possible terror attack on another Egyptian flight this May.

It is no surprise that tourism is down 51 percent in the first half of the year. Before these devastating attacks, the number of tourists had deflated to 9.3 million in 2015. One can only imagine what 2016 will end with.

Enter Sally Soliman, a walking encyclopedia on the magnificence of such treasures. With a BA in archeology and history and 27 years under her belt, she is an expert on both the Islamic and Pharaonic. So when she’s talking about the state of Egypt’s relics and says "we don’t have good and bad, we have bad and worse," people listen.

Imagine national treasures under attack by air, corrosion and underground water, while official neglect, lack of education and corruption do the remaining damage.

When history deposits splendour at your doorstep, prospects should be far better. Treasures are easily stolen. Soliman gives one particularly egregious example from 2010. Somehow, in the middle of the night, thieves made off with a large part of the Qani Bey mosque, specifically, the elevated platform from which the imam addresses worshippers.

Too small to notice? Weighing 100 kilos and ‘’over five meters high’, the subsection should have drawn attention. Obviously, many had to look the other way for this to happen. To this day, the criminals are on the lam.

Passing the buck is a national sport and these two ministries are world-class performers in this farcical exercise. Imagine Laurel and Hardy pointing fingers at one another and you quickly piece together the puzzle.

‘Some money and a nice kebab’

An experienced antiquities inspector who we shall call, for his protection, Mr S, says the disaster is not Cairo-centric. Problems stretch from Sinai, south to Luxor and to points, like Banha, in between. His voice shaking with passion, Mr S told a tale of how, in the 1970s, Greek-Roman antiquities were discovered in Banha.

Almost as soon as they were discovered, paperwork was signed and the antiquities ministry lost purview over the site. Just as quickly, licenses were issued authorising the building of a stadium. Years later, while overseeing work there, our inspector witnessed antiquities being unearthed.

Deeply frustrating to inspectors like Mr S is the limited role they play in rooting out crime in the field. Should an inspector come upon someone digging illegally for Pharaonic artifacts, for example, he can’t give a ticket or a citation. He is only supposed to call the police. But once they are involved, there is no arrest and the law is so “full of loopholes”, says Mr S, that even an average lawyer can get a client off.

In Qalyoubia, there were beautifully detailed Greek baths. Not so after they went through the hands of Egyptian conservators. "There is zero detail evident now," said a now morose S. This lack of training causes foreign research expeditions to "not trust Egyptian inspectors and they have every right".

Those foreign researchers no doubt remember that it was locals who did damage to Tutankhanmun’s mask, in 2014. Lack of experience and training play a part. Horrific stories of corruption among the lead inspectors, who are connected to the thieves in some cases, were too many to count by this inspector.

Bottom line for S: "No one can build unless antiquities have been removed from the land, so some money and a nice kebab dinner takes care of that problem."

Looting plagues archeology in Egypt. Using satellite data, scientists at the University of Alabama found that stealing more than doubled between 2009 and 2010 and then doubled again after the revolution.

The professors and archeologists at the university consider the crime "simply staggering". And what the researchers in Alabama discovered from thousands of kilometres in the sky, Soliman saw with her own eyes. "Tens of monuments were being looted," Soliman told me.

Some of the stolen items went to Europe and the US, but much of the Islamic art found its way to the neighbouring Gulf region. A lion’s share winds up in private collections in Saudia Arabia, Qatar and the United Arab Emirates. But without hard facts at hand, Egypt cannot hope to retrieve the treasure trafficked under radar to their new private owners.

Without trained staff to look after them, no less damaging is the abandonment of many antiquity sites. “Without tourism,” officials tell Egyptologists like Soliman, “there is no money.” Privately, one official even told her, “May some of these artifacts disappear so we have less on our shoulders.”

Sleight of hand, a few pounds and a smile

Egypt is not helping itself. Try and secure an Islamic monument home, as scholars and researchers do sometimes for academic purposes, and you will find outrageously priced daily rentals reaching nearly 30,000 Egyptian pounds, says Soliman.

'I think 9,000 times before going to photograph…I have to be smart'

It is the same faulty logic that has a failing Suez Canal increasing tariffs to make up for lost revenue. The result? Even more ships finding alternate routes and costing Egypt much-needed revenue. It is the same with antiquities tourism: how do you insist on setting such high prices when demand is at an all-time low and services are lacking at many of these sites?

Personal relationships, sleight of hand, a few pounds and a smile get Soliman access to many sites so she can document them. But under the draconian political circumstances, photographing dilapidated sites to bring attention to corruption and a slow-as-black-Egyptian-molasses bureaucracy could mean prison time.

"I think 9,000 times before going to photograph…I have to be smart," she said. But she does risk arrest for her blog, Bassara Heritage, where she documents all that she sees with her trusted assistant, Mohamed Soliman, no relation, but a fellow history buff.

The return of that missing revenue would do wonders for an economy that is losing allies in the all-important Gulf, with Saudia Arabia pulling back so much that Sisi, on Twitter earlier this week, said "enough dependence on our Arab brothers".

To get you have to give and Soliman says three things need to happen for the twin fields of Pharaonic antiquities and Islamic art to flourish:

1. Admit there is a problem

2. Wipe out corruption in "every corner and every breath"

3. A short term and long term plan for the overall management of the country’s antiquities

Soliman is right, but even more needs to change. Egypt is a country not only stagnating, but one that is taking decisive steps backwards under the auspices of a counter revolution. In such an environment, the old rule and the young are thrown by the way side because they represent change. Change and counter revolutions don’t mix.

There are those within those two crucial ministries who want to protect these treasures, to document their existence and to stamp out corruption. But all of their purity of intent is blown to bits within ministries where standard operating procedure is highly averse to change.

When the dollar hits 17 Egyptian pounds, the economic disaster can be used to bring tourists with their strengthened dollars back. In a country experiencing a monumental fit of xenophobia triggered by the Sisi cult’s hyper nationalism, this is a near impossible task. If the enemy is the foreigner, how can he also be the saviour?

For hope to return where archeologists roam, there must be change. Much like the country housing it, the world of antiquities awaits a revolution to protect its very existence.

Photo: Egyptian antiquities workers excavate in the desert of the Valley of the Golden Mummies in the Bahariya oasis, 375 kms west of Cairo in December 2004 (AFP)