Azzam Tamimi
Two years after the UK openly viewed the Brotherhood as a force for moderation, David Cameron takes the Gulf line of hostility, suspicion 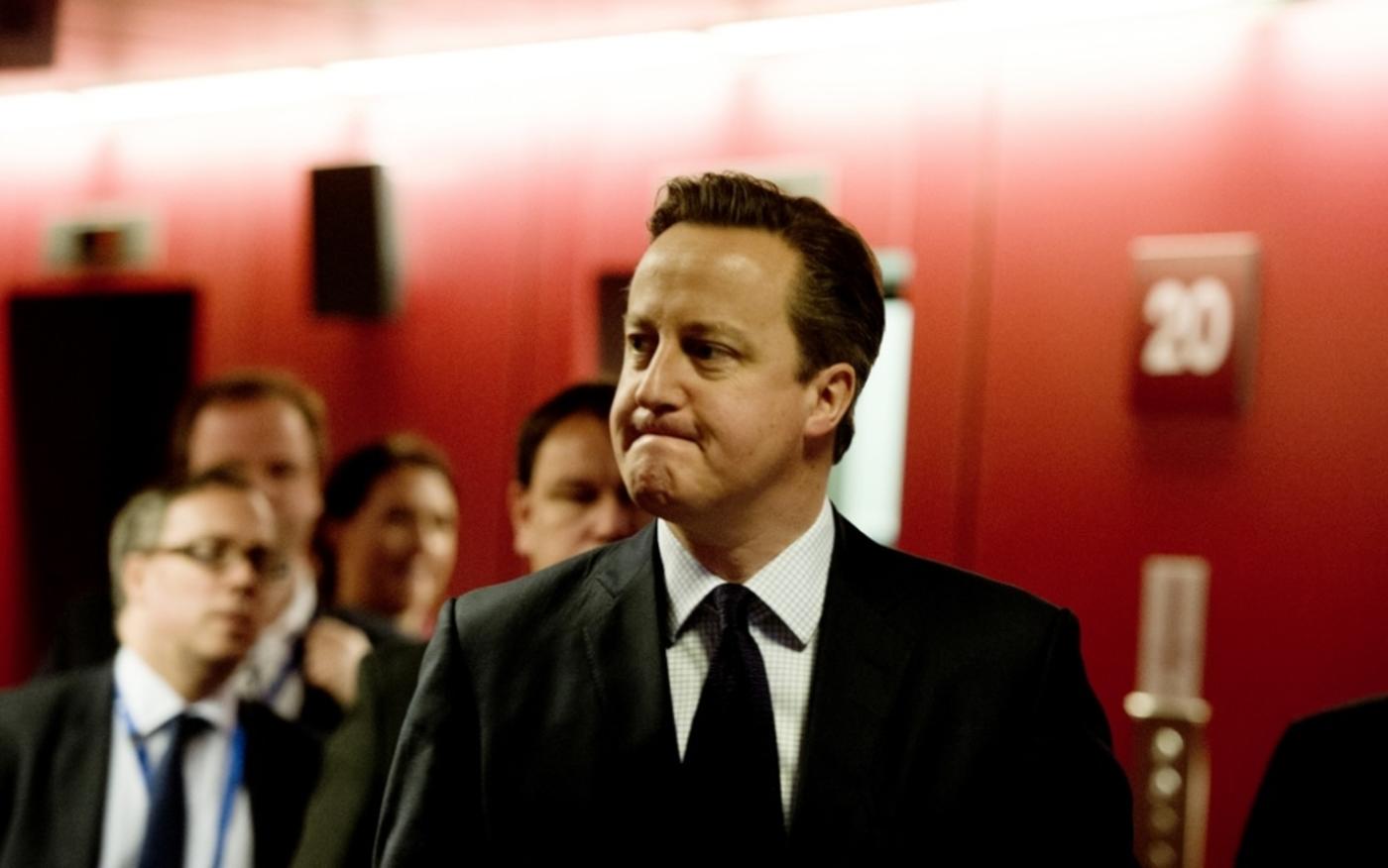 Nothing can explain British Prime Minister's David Cameron’s hostile attitude towards the Muslim Brotherhood other than that he is succumbing to pressure, even blackmail, from the oil-rich Gulf Arab regimes of the United Arab Emirates and Saudi Arabia.

Until just before the 3 July 2013 military coup - incited and funded by such regimes - that toppled the first democratically elected president in the modern history of Egypt, the British state's institutions saw fit not only to regard the Muslim Brotherhood as a force of moderation in the face of radical and violent trends inside and outside Britain, but also to engage it at various levels.

The Cameron government continued to build upon the work undertaken in this regard by the previous Labour government, work that saw leading members of the Muslim Brotherhood in the UK participate in consultations and joint projects such as those carried out by the Muslim Contact Unit within the Metropolitan Police as well as by other government departments.

One of the early successes was the salvation of the Finsbury Park Mosque that had previously been hijacked from the local Muslim community by followers of a self-declared ultra-radical cleric by the name of Abu Hamza. Such cooperation continued despite disagreement with the Tony Blair administration over the war on Iraq.

When the 7 July 2005 attacks in London took place, prominent Muslim community leaders who were affiliated with the Muslim Brotherhood spoke out publicly, not only denouncing the attacks but also urging members of the Muslim community to cooperate with the security agencies in their effort to prevent the recurrence of such atrocities, including informing on suspects even if they were their close relatives.

When BBC journalist Alan Johnston was kidnapped in the Gaza Strip by a radical group claiming affiliation with al-Qaeda, Alhiwar satellite TV channel ran a campaign for his release and a leading Islamist member of the Palestinian community in the UK helped coordinate British efforts with Hamas in Gaza to secure his freedom from captivity and his safe return to the UK.

Although the Blair government succumbed to Israeli and US pressures and spearheaded the European move to designate Hamas as a terrorist organisation, unofficially the UK government, like several other EU governments, continued to show interest in indirect engagement with the movement, especially since it won legislative elections held in Gaza and the West Bank in January 2006.

As the breeze of the Arab Spring blew from Tunisia to Egypt, the Cameron administration showed more interest in, and sought further engagement with, the global Muslim Brotherhood movement, which seemed destined to lead the change in much of the Arab world.

Whitehall officials, like other policymakers in the West, seemed resigned to the fact that the Arab world was on the verge of a major historic transformation that was most likely to be spearheaded by the Muslim Brotherhood, the largest pan-Islamic movement that campaigned for peaceful change and espoused the belief that democratic values and practices were perfectly compatible with Islam.

Throughout 2011 and 2012, and as the Arab Spring toppled one dictator after the other in the Middle East and North Africa, the Cameron government held a series of meetings with senior members of Muslim Brotherhood groups from the region and from within the UK to discuss prospects.

Soon after the Egyptian people elected Mohamed Morsi as president, Cameron invited him for an official visit to London. Morsi had earlier made a number of foreign state visits, as Egypt’s first elected civilian president, including to Germany, Brazil and South Africa.

Leading figures of the UK Muslim Brotherhood were briefed about the forthcoming visit to London and were told that Morsi was to have iftar (a Ramadan evening meal) at 10 Downing Street on 11 July 2013. Regrettably, that iftar was never to be because of the UAE- and Saudi-sponsored military coup that crushed Egypt’s democracy just one week before President Morsi was supposed to land in Heathrow.

It should make one wonder why none of the above facts were ever referred to by Cameron in his statement summing up the supposed conclusions of Sir John Jenkins' review into the Muslim Brotherhood. Suddenly, there is nothing but suspicion and concern, let alone insinuation, that the group may have extremist tendencies or terrorist links.

Cameron failed to mention - most probably deliberately omitting - some of what Sir John may have included in his report, which is yet to be published in full, the fact that the Muslim Brotherhood has proven to be more democratic than any of the other political formations in the Arab world, including secular and liberal ones. Cameron seemed oblivious of the fact that whenever the movement took part in free and fair elections it came out top because it enjoyed the support and confidence of the public.

Cameron did not have a word of sympathy for the tens of thousands of Muslim Brotherhood members who today languish in the detention centres of the military coup authorities in Egypt including ousted president Morsi, whom he almost entertained at 10 Downing Street. The only sin ever committed by these detainees and the thousands of their brother and sisters who were murdered in cold blood in Rabaa and other Egyptian squares was to oppose the coup against democracy.

And finally, Cameron had to say something about Hamas because it is the only entity he could associate with both terrorism and the Muslim Brotherhood.

This is despite the fact that he was recently prepared to host the Hamas leadership in London. An invitation was actually delivered to the Hamas leader Khalid Mishaal in Doha by no other than the infamous Tony Blair, who coordinated with Prime Minister Cameron's efforts to persuade Hamas to come to a negotiating table in London for settling Gaza’s problems with Israel.

I personally would not wish to be in Cameron’s shoes. It must be rather discomforting to be compelled to act hypocritically, to have to succumb to blackmail by rich despotic Arab rulers in the Gulf so as to take part in the endeavour to frustrate the democratic struggle in the Arab world while also heading one of the world's oldest democracies.

- Azzam Tamimi is a Palestinian British academic and chairman of Alhiwar TV Channel. His books include: Hamas: Unwritten Chapters (Hurst, 2007) and Rachid Ghannouchi: a Democrat within Islamism (OUP, 2001) 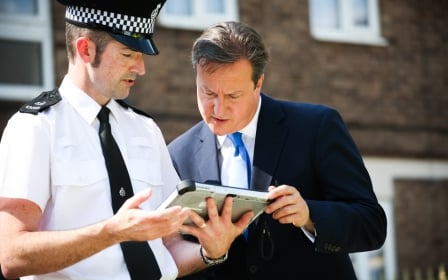 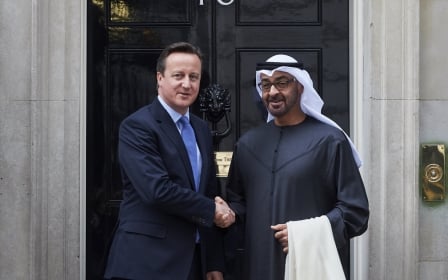 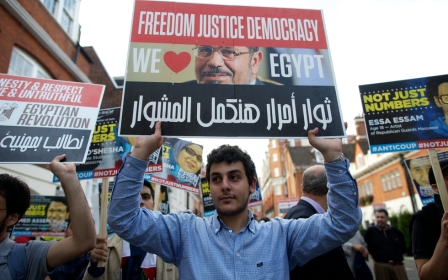