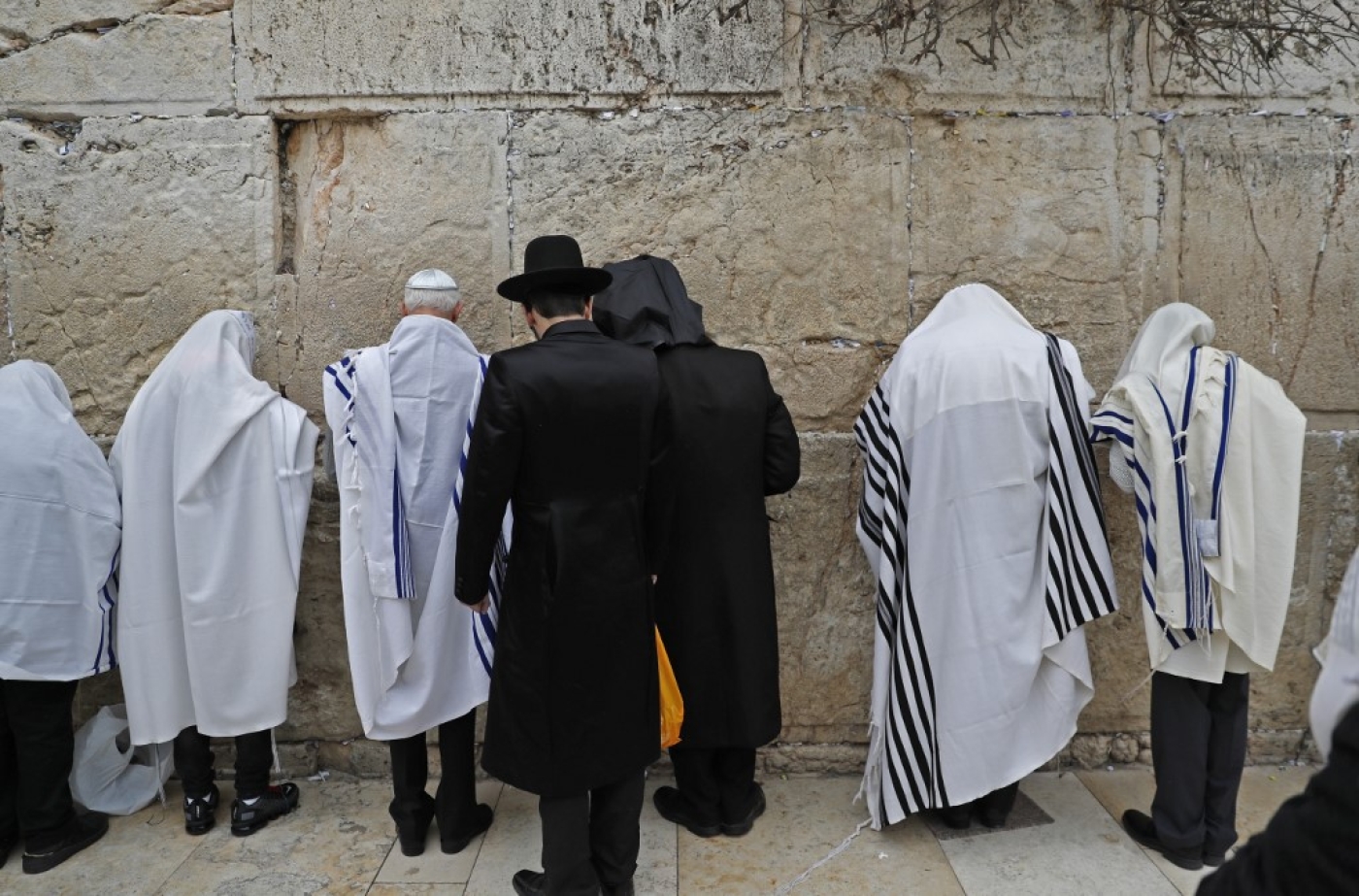 Since its inception, the Zionist project to colonise Palestine has been determined and uncompromising, while also demonstrating ideological innovation and acrobatics in packaging its theft of the country.

While the initial goal was to create a Jewish majority in Palestine, successfully achieved for a few decades through the expulsion of hundreds of thousands of Palestinians in 1948 and 1967, Zionists have more recently had to face the old/new reality of Jews as a minority in their own settler-colonial state.

The Israeli government has been obsessing about the dwindling numbers of Jews and rising numbers of Palestinian under its rule for decades. This has led it to convene several conferences on the "demographic danger" Palestinians constitute to its racist colonial settler project.

The first conference, sponsored by the Institute of Policy and Strategy at the Herzlia Interdisciplinary Center, was inaugurated in December 2000. One of the “main points” identified in the 52-page conference report was the concern over the numbers needed to maintain the Jewish supremacy of Israel: “The high birthrate [of Palestinian citizens of Israel] brings into question the future of Israel as a Jewish state…The present demographic trends, should they continue, challenge the future of Israel as a Jewish state.

"Israel has two alternative strategies: adaptation or containment. The latter requires a long-term energetic Zionist demographic policy whose political, economic, and educational effects would guarantee the Jewish character of Israel.”

Israeli’s current and former prime ministers attended, and Israeli president Moshe Katsav addressed the attendees. The conference was co-sponsored by the American Jewish Committee, the Israel Center for Social and Economic Progress, The Israeli Defense Ministry, the Jewish Agency, the World Zionist Organization, the National Security Center at Haifa University, and the Israeli National Security Council of the Prime Minister’s Office.

Needless to say the two strategies the conference elaborated to alter Jewish minority rule over a majority Palestinian population failed.

Once the Zionist movement decided, less than a decade later, to focus exclusively on colonising Palestine, it was decided that the JCA be also transformed. In 1924, it was formally renamed the Palestine Jewish Colonization Association, and its funds were exclusively used for Jewish colonisation of Palestine. In 1899, the first Zionist bank was founded, appropriately called the Jewish Colonial Trust, to buy Palestinian land for the exclusive use of Jews.

Beginning in the 1930s, at the height of anti-colonial resistance in Asia and Africa, Zionists began to suggest changes to their ideological vocabulary. Frederick Kisch, chairman of the Palestine Zionist Executive in charge of Jewish colonisation of Palestine, noted in his diary in 1931 that he was “striving to eliminate the word ‘colonization’ … from our phraseology.

Since the 1950s, Zionist propagandists worked hard to recode the settler-colonial project as one of national liberation for Jews

“The word is not appropriate from our point of view since one does not set up colonies in a homeland but abroad: e.g. German colonies on the Volga or Jewish colonies in the Argentine, while from the point of view of Arab opinion the verb to ‘colonize’ is associated with imperialism and aggressiveness.”

Since the 1950s, Zionist propagandists worked hard to recode the Zionist settler-colonial project as one of national liberation for Jews. Claiming that the establishment of the state of Israel was not a colonial act but rather an act of “independence” from colonialism, Israel tried to erase the history of the debate among Zionist leaders over what to name the document they intended to issue on 14 May 1948.

When some suggested calling it a “declaration of independence,” they were voted down. The Zionists appropriately called it “The Declaration of the Establishment of the State of Israel”. While the declaration mentions Jewish aspirations to “independent nationhood”, it does not refer to establishing Israel as an “independent” state, but rather as a “Jewish” state.

This was no oversight, but the result of a rejection of an amendment adding the words “sovereign independent” to the declaration. Still, Israeli apologists would at best admit, without irony, that the country might have been established through colonisation but not colonialism.

From the 1950s through the 1990s, Israel insisted that Arab states recognise its “right to exist” - a formula no other state has ever required, because in international law, a state can be recognised de facto or de jure, but none has a legal “right to exist”.

Eban’s recognition was not unlike earlier statements by David Ben Gurion or Chaim Weizmann, which placed the Jewish right of conquest of Palestine as superior to the Palestinians’ right to self-determination.

By 2007, the Israeli government of Ehud Olmert, and Benjamin Netanyahu thereafter, insisted that since Egypt and Jordan and the PLO - transformed through the Oslo Accords from a liberation movement to a subsidiary of Israeli colonialism - were forced to recognise Israel’s “right to exist” as a settler-colony, the new task before the Palestinians and all other Arabs was to recognise Israel as a “Jewish state”, which would privilege Jews racially and religiously over non-Jews.

Self-determination was never previously advanced, either as a legal principle or as a right, by the Zionist movement or in Israeli law. Indeed, it was not even mentioned in key Zionist ideological documents historically - not in the writings of Theodor Herzl, nor the Balfour Declaration, nor the League of Nations mandate, nor the UN Partition Plan, nor the Zionist “Declaration of the Establishment of the State of Israel.” Rather, Israel’s “right to exist as a Jewish state” is the formula several US presidents insisted that Palestinians and other Arabs accept. From George W Bush to Barack Obama, Palestinians were threatened with dire consequences if they refused. The new code for that right is “Jewish self-determination”.

President Donald Trump’s “deal of the century” aims to legitimise, once and for all, the Zionist settler-colonial project and its right to state-sponsored racism.

Israel’s leaders now accept that Jewish colonists and their descendants will forever be a minority in historic Palestine, especially as prior measures to make them a majority through ethnic cleansing and expulsion are no longer available options.

Unable to further reduce the number of Palestinians, Trump’s plan aims to categorically negate Palestinian refugees’ right of return to their homeland, guaranteed by international law, by undercutting UNRWA, the agency that provides them with vital aid. Yasser Arafat explained in a 2002 New York Times article that he understood Israel’s racist “demographic concerns” as far as the Palestinian right of return was concerned.

Lining the pockets of businessmen

As for the Palestinian majority living under Israeli colonialism and Jewish minority rule, the Israeli nation-state law has eroded their rights completely. The point of the exclusivity of self-determination for the Jewish colonists is that it must be exercised regardless of demographics. Israel had no choice but to drop its liberal-democratic pretence.

This week’s “workshop” in Bahrain for “peace” and “prosperity” is simply a compensatory mechanism for the unwavering US support of Israel’s refusal to vacate any of the stolen Palestinian land, or to grant any rights to the majority Palestinian population still living on that land, whom it can no longer expel. 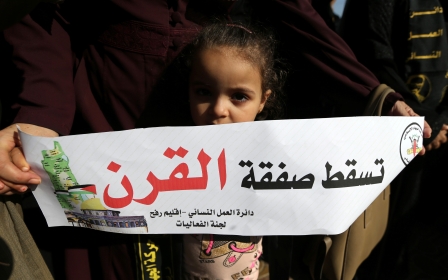 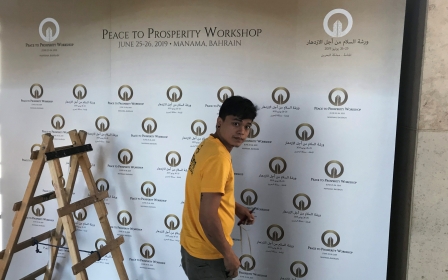