Amr Khalifa
If Egyptian President Abdel Fattah Al-Sisi offered the US president advice, man to man, what would he say? Amr Khalifa finds out in this satire 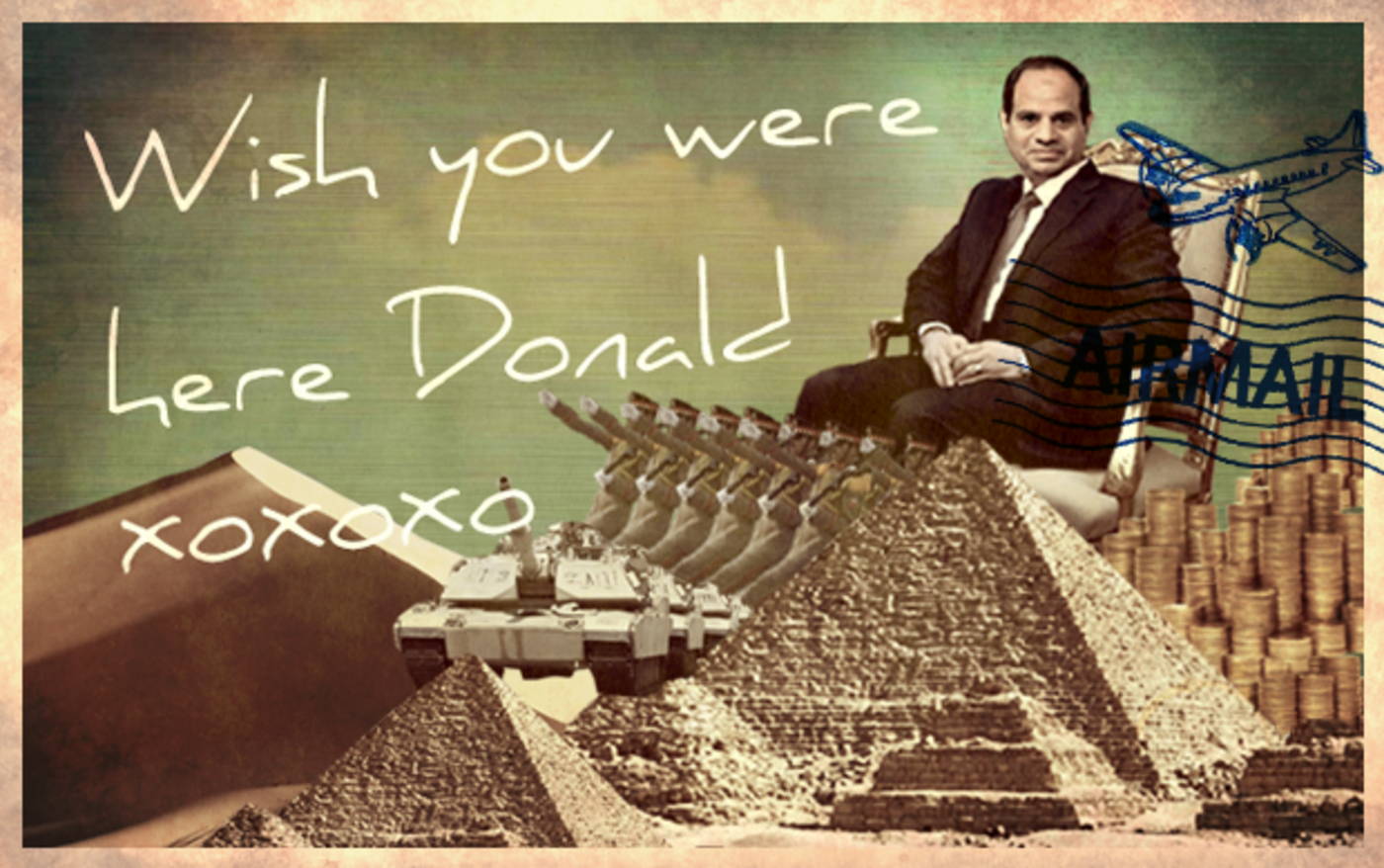 The road to political riches is paved with honesty and, in that spirit, I thought it important that we have a talk away from those prodding microphones and cameras of the ill-intentioned press.

Based on our first two meetings, I think it’s fair to say that we are the protectors of the Egyptian-American galaxy. Such a mission, making America and Egypt great again, requires a bluntness atypical of diplomatic travails.

Having said that, we need to keep a healthy distance from the entanglements of democracy. While it may seem sweet, that honey bee is sticky and can impede men like us from the mammoth tasks at hand.

While you have the better part of eight years ahead of you and I have the better part of five - insert wink where appropriate - to reach our end goals, we must admit, to one another at least, that dictatorship has gotten an unfair rap. If we mean well, and we undoubtedly do, everyone should just shut up and let us tend to the business at hand.

You are probably wondering why I, your friend across the Atlantic, am taking time out to give some advice: the old cliché holds true, united we stand, divided we fall. As an experienced businessman, you could not have imagined in your worst nightmare how vicious those purveyors of fake news could be, nor could you have prepared for how nasty those democrats are.

But let me tell you, Donald: I have been in the lion’s den. First, in the army, then intelligence and finally, the presidency. My vast experience is at your disposal. Quite a deal given that, as you know, world leaders and “the greatest philosophers” alike await my proclamations. Speaking of proclamations, let me tell ya this. We both have a bad habit that needs to be nipped in the bud: speaking! Don’t get me wrong, words are important, and in politics, sometimes more so than actions, as I am afraid, you are learning the hard way.

But which words and when and in what forum matters – and matters a great deal. I will be the first to admit that my tongue, far more often than I would like, wins the race with my mind. I am sure you heard, for example, about that time I offered to sell myself for Egypt. “If I could sell myself to benefit this nation, I would have done it,” I told everyone on TV.

Now, in your mind and mine (I am more certain of this even than I am of our bromance) this sounds incredibly patriotic and should have been applauded, right? But, my friend, not everyone is as well-intentioned as we are. When great men tackle great responsibility, evil lurks around every corner. Next thing you know, some evil dude from the banned group is putting me up for sale on EBay, and for only $100,000 if can you believe that!

But - and I am putting it all on the table here - you have had your issues with the same virus of the mouth. Putting aside your nearly daily adventures on Twitter, that faux pas with Russian Foreign Minister Lavrov and Ambassador Kislyak when you referred to former FBI director Comey as “crazy” and “a real nut job”? It was the kind of thing that can win two important "friends" but create 10 million enemies.

Put it this way, as my advisors have tried to tell me too many times to mention: never leave home without verbal breaks, Donald, otherwise the car will crash!

On dealing with the press

I know you sang that DJ Khaled ditty "All I do is win" and I am a winner myself, fighting for a very poor nation, but that’s not how the world always sees us. You are talking to a guy who Foreign Policy said was “getting very good…at being a dictator”. So trust me when I tell you: the press, and your ability to control it, is key.

You can muscle them around a bit. Just don’t do it in public. Feel free to declare freedom of speech “sacrosanct” while your security forces raid the Journalist Syndicate for the first time in the nation’s history. So long as there isn’t any way to link you to that sort of stuff, you’re golden, Donald. But let me be clear: I’m talking about foreign journalists here. That you can get away with (Obviously. Look at me). But Donald, you have this pesky habit of going hard after the American press. Not a "winning" strategy, my friend. When you call American media the “enemy of the people”, you are creating a formidable enemy in one fell swoop. Just like I face trouble at home, with an inflation rate that seems like a balloon that the Muslim Brotherhood blows up when it wishes, you are facing that Russiagate mess and you need all the friends you can get.

If you don’t start playing nice with the likes of the New York Times and the Washington Post - or at least give the appearance of doing so like I do - you may lose more than the presidency, buddy. These guys are on a mission, in their twisted minds, to protect the Constitution and the republic.

You have to show them that Sisi isn’t the only ”fantastic guy”, say God bless America whenever possible, say a lot while saying nothing. It’s a winning proposition for me and it will be for you. Beat their fake news with yours, Donnie. So long as you don’t control virtually every newspaper and TV station like I do - including that station "rumoured" to be run by Egyptian intelligence - you have to drown them in honey or they will drown you.

Play your cards right, however, and you will be presented to the world as a staunch fighter against the Islamic State, even while losing the fight against that very enemy, on a daily basis, in Sinai and as terrorism triples under your watch! Forget reality. Perception is everything. Take that pill every morning and you will not only make the silly impeachment talk disappear, but you and I will also appear in celebration on the steps of the White house in 2020.

While you manage the big picture, using that docile press you’ll have once you use the strategy I’ve laid out, we have to work on shifting your domestic visual. What’s everyone talking about in New York and DC right now? It’s Flynn, Manafort, Comey, Kushner, Bannon, Russia and collusion. Yes, you shifted everyone’s attention onto Riyadh and you raised $350bn. But money is not going to shift your problem by itself.

In Egyptian politics, we have a saying that trumps, pun intended, all others: watch the birdy. While I tarred and feathered human rights, killed a few thousand, and jailed tens of thousands, I repeatedly pounded home two themes: security and fighting the evil ones. My chosen "evil ones" are the Muslim Brotherhood and yours need to become the Democrats. If you can change the narrative from the Russia conundrum to Donald, the shield against the sore loser Democrats, you will accomplish two things. First, the headlines blaring the latest leak - all too often with you as the mother of all leakers (tsk tsk Donald) - will cease and, secondly and no less importantly, it will set you up nicely for the upcoming election campaign, the one that started the day you became president. Fake news is your best friend. Create it, and make sure you have enough friends to execute it.

Friends aren’t a dictator’s best weapon though - fear is. So embrace it as your political partner, inject it into public discourse and watch the public run to you for protection. I know you aren’t a big fan of history, but in looking at Egyptian history, I came to understand this from the father of the Camp David accords, Anwar El Sadat. He said: “Fear has a tremendous destructive power in the minds of the people. If fear were a man, I would kill him.”

Though I am sent by God, I am not a seer of all things, so I can’t tell you if Sadat meant what he said or if it was an attempt to burnish his image as a democratic leader. Well, in his mind at least. But that was one smart man.

And men like us need to come to understand the difficult truth: being feared is a thousand times better than being loved. We have goals to achieve and systems to change and without the baton in hand, we won’t wield the necessary power to fight the press, the judiciary and the legislature. A democratic exterior, while appealing, cannot be reality. Look like JFK, but embrace your inner Nixon, Donnie.

I know your plate is full these days and mine is too, what with Ramadan on the door steps and all. But I have a request before I go. Next time, when I compliment your “unique personality” can you find something to compliment other than my “shoes”?